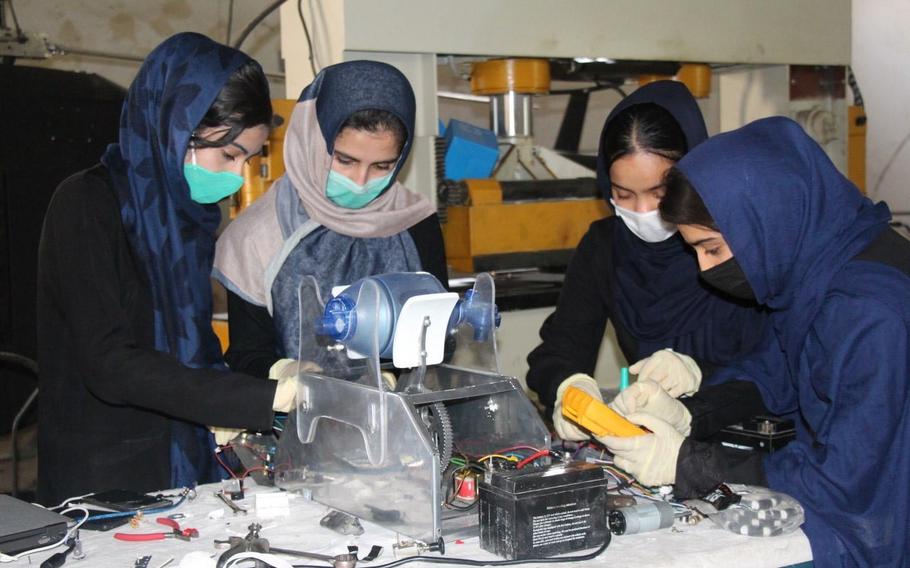 Amid the rapid advance of the Taliban and the collapse of the Afghan government, the all-girl robotics team “Afghan Dreamers" is trying to escape. (Facebook)

Four years ago, they touched down at Dulles International Airport, met with bouquets and placards. Six members of the "Afghan Dreamers," an all-girl robotics team, went to Washington to demonstrate their talents and creativity at an international competition. Now, amid the rapid advance of the Taliban and the collapse of the Afghan government, the team is trying to escape.

Under Taliban control, women and girls have faced repression of education and expression in Afghanistan. As the Taliban has reasserted control of the country, there are already reports of school closures and crackdowns.

In an opinion article published in The Washington Post on Monday, the day after the Taliban entered Kabul, Motley and Meighan Stone said the team was "made up of 25 girls ages 12 to 18 and their mentors" from Herat.

The team hopes that's in Canada.

"The girls have competed in Canada, they've met the prime minister," said Motley. "They have a lot of great support in Canada."

Canada is among the nations that have committed to resettling 20,000 Afghans, focusing on women, children, religious minorities and LGBTQ people.

Since the team was established in 2017, it has come to represent some of the hopes for a vision of Afghanistan that includes education fully open to women and girls. The team's faces were emblazoned on a mural outside the walls of the U.S. Embassy gates in Kabul, smiling as a symbol of the Afghanistan that was to be.

Roya Mahboob, a tech entrepreneur born in Herat, founded the team. She now leads the Digital Citizens Fund, a nonprofit organization that helps girls and women gain access to technology. Mahboob, like the rest of the team, is still in Afghanistan, left to an uncertain fate.

On Sunday, as the Taliban entered Kabul, she tweeted in Dari, "On the verge of collapse. Although the people of the city are resisting, how easily we believed our corrupt leaders. ... It is a difficult moment ... every night until independence, until freedom, until liberation."

To get to that competition in Washington, the girls made two arduous trips from Herat to Kabul so they could get visas. There were two visa rejections along the way, and the robotics kits were repeatedly detained by customs officials, but the trip was eventually approved.

Ivanka Trump greeted them at the White House.

Then, last year, as the coronavirus ravaged the world, the team developed ventilators made from parts of old Toyota Corollas.

But for the students on the team, too young to remember the previous Taliban rule, their future of scientific discovery may be in peril.

As the Taliban swept through the country this summer, concerns over the girls' safety have intensified.

"These girls are terrified," said Motley.

In an opinion article for the New York Times, Malala Yousafzai wrote that, "Afghan girls and young women are once again where I have been — in despair over the thought that they might never be allowed to see a classroom or hold a book again."

The situation for those hoping to leave Afghanistan remains fluid and uncertain. Evacuations are limited to Hamid Karzai International Airport in Kabul, where nearly 5,000 U.S. troops are deployed to assist with evacuations. Thousands of Afghans have rushed to the airport, searching for a way out of the country. More than 600 people crammed into a C-17 military transport jet, among the most packed flights that aircraft has ever undertaken, to leave the airport this week. Other videos appeared to show people falling to their deaths as planes they had clung to took off.

For the Afghan Dreamers, passage out of Afghanistan — and their safety — remains unresolved.

"The focus is that all women and girls should have the freedom of movement, both inside and outside the country, to move by land or air," said Motley. "They should be able to do that."