Barbara Lee doesn’t feel vindicated for voting against the Afghan war: ‘I almost wish ... I had been wrong’

by
Roxanne Roberts
• The Washington Post • August 18, 2021
This story has been corrected. 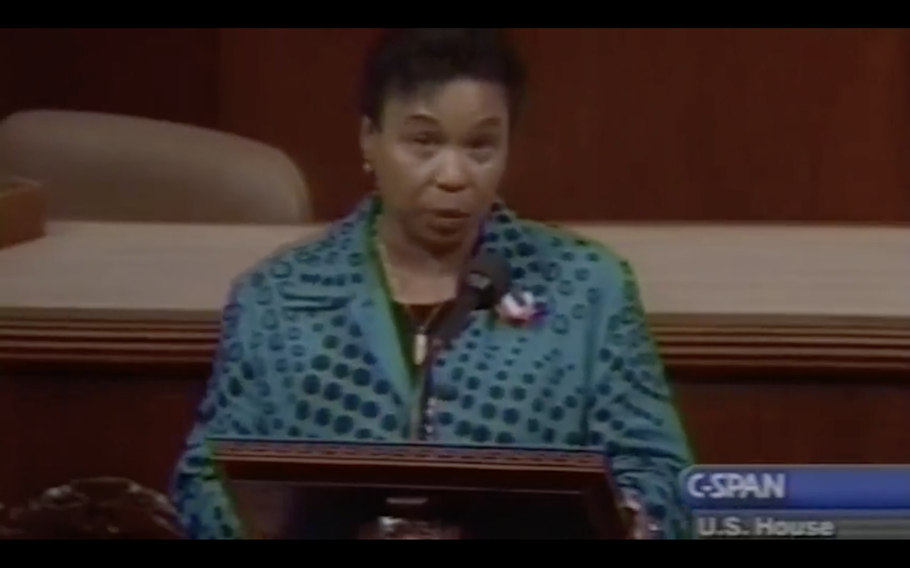 In 2019, Rep. Barbara Lee was campaigning for Kamala Harris in South Carolina when she was approached by a big, burly man and his child. He didn’t want to talk about Harris. He wanted to talk about something Lee did in 2001: She was the only member of Congress to vote against authorizing unlimited military force in the aftermath of the 9/11 terrorist attacks.

“I wasn’t sure what was going on” as the man walked up to her, the California Democrat recalled Tuesday. He explained that he was initially furious about her vote but, over the years, had a change of heart. “What you did, I hated you,” he told her with tears in his eyes. “But I understand now exactly what that was all about. I came here because I want to personally apologize and I want my son to see me apologize to you for that.”

For 20 years, Lee was like the mythical Cassandra: Gifted with the ability to predict the future, cursed that no one would believe her. Then came the endless wars in Afghanistan and Iraq, the trillions of dollars and thousands of lives sacrificed, and now the stunning collapse of Kabul.

“I almost wish, in many ways, that I had been wrong,” she said. “Because what’s taking place today is terrifying.”

Suddenly, Lee is the voice everyone wants to hear. Every cable pundit wants her opinion. Her office is inundated with media requests, even as she is scrambling to protect and evacuate U.S. citizens and Afghans fleeing the Taliban. Once reviled, her solitary vote against the Afghan invasion is now being reframed as an important, prescient moment in American history.

There is no sense of vindication. What she’s feeling right this moment is “worry and sadness and anxiety.” More than anything, there’s a sense of urgency.

“I’ve got to do more,” she sighed. More to protect women and children, more for the Afghans who helped American soldiers and journalists. As chair of the House Appropriations subcommittee on foreign operations - which funds diplomatic missions and humanitarian assistance - Lee is desperately trying to bring some order to chaos and make sure there are enough assets in the region to get everyone out safely. That means cutting through some of the bureaucracy to expedite special immigrant visas and pressure the Defense and State departments to move more quickly.

That urgency to do something, anything, is a sharp contrast to 2001, when Lee was surrounded by Americans reeling from the 9/11 attacks. Just three days later, the House voted 420-1 on the Authorization for Use of Military Force, which gave the president power to use all “necessary and appropriate force” against anyone involved in any way with the terrorist act.

Lee never considered herself a pacifist — her father was a retired lieutenant colonel who fought in World War II and Korea. She was reeling, too, but she was also acutely aware that this was the worst possible moment to make a momentous decision. Her concern was not the need to respond, but that this authorization gave the executive branch a blank check in perpetuity for what she calls “Forever Wars.”

In her historic speech on the House floor, Lee — in just her third year in Congress — pleaded with her colleagues: “Our country is in a state of mourning. Some of us must say, ‘Let’s step back for a moment. Let’s just pause, just for a minute, and think through the implications of our actions today, so that this does not spiral out of control.’”

Her father was the first person to call her after her speech. “You do not send our troops in harm’s way with no exit strategy,” he said approvingly. Others were not so kind: Lee was publicly condemned as a coward and a traitor and received numerous death threats.

That vote shadowed her everywhere. Over the years, people who once vilified her would take her aside and share their concerns about the toll of endless wars.

There was this note: “I was one of those who wrote you a very nasty letter,” it said, as Lee recalled it. “I condemned you, called you a traitor, the whole bit.” Then, wrote the woman, she had two kids and her perspective changed: “I just want to tell you were right and I apologize for what I said to you.” The woman also wrote that she didn’t have a lot of money, but enclosed a check for $15.

Throughout it all, voters in Oakland kept sending Lee to Washington. The liberal Democrat has worked tirelessly to repeal the Iraq resolution and the 2001 authorization, partnering with veterans groups to build political support. Any president can respond to an imminent threat with military force, she said, but Congress cannot give up its role in declaring war. “It’s not easy, but again, I always say, as a Black woman in America, we have to be persistent.”

She supports President Joe Biden’s decision to withdraw troops from Afghanistan but was stunned by the rapid collapse of the country. “I think we’re caught — I won’t say caught off guard — but surprised we didn’t calculate how ready the Taliban were,” she said. Our soldiers did everything we asked of them, she added. There will inevitably be hearings, the emotional deep dives into the what and how and why.

But for now, Lee hopes there are lessons to be learned. That America should not be in the business of nation-building. That the three aspects of foreign policy — defense, diplomacy and development — need to be reconsidered and rebalanced. As chair of the appropriations subcommittee, she oversees a budget of about $62 billion for diplomacy and development. The defense budget? $714 billion in 2020.

“People need to understand that why some of us are so adamant about reducing the defense budget,” she explained. Even a 10% cut, which Lee supports, would pour tens of billions into more nonmilitary foreign policy initiatives.

And last, but certainly not least: That opposition is at the heart of our democracy, especially when you really believe the Constitution is violated or there are moral and ethical issues at stake. And there are so many, said Lee, when it comes to war and peace.

“One lesson that I hope people have learned,” she said, “is that central to our democracy is the right to dissent and that right has to be protected.”

This story has been corrected to reflect that the appropriations budget for diplomacy and development that Rep. Barbara Lee oversees is about $62 billion.