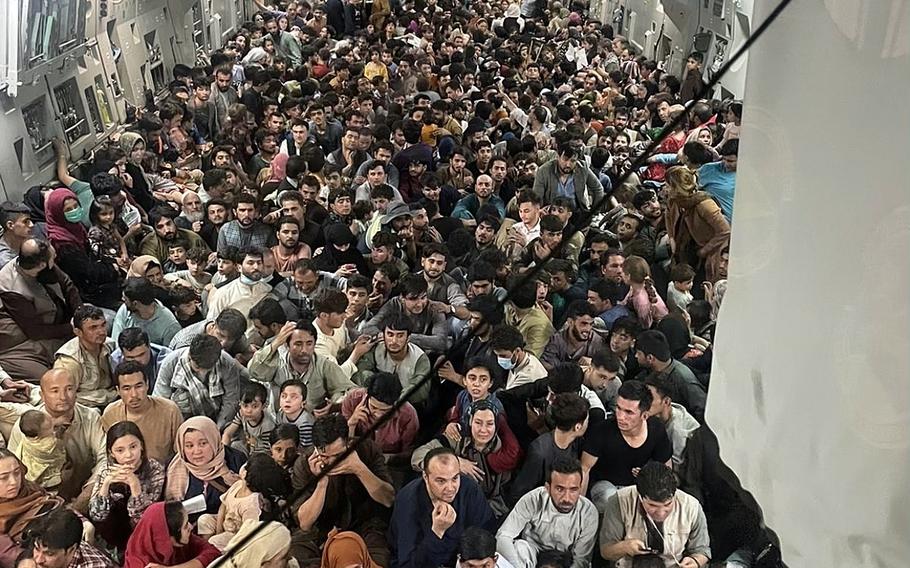 An Air Force cargo jet safely airlifted over 600 Afghans from Kabul as the U.S. scrambles to evacuate thousands following the Taliban’s takeover.

A crowded C-17 Globemaster III whisked away the evacuees from Hamid Karzai International Airport late Sunday, according to the caption on a photo released by Air Mobility Command on Tuesday.

“This speaks to the humanity of our troops in this mission,” Maj. Gen. Hank Taylor, director of current operations on the Joint Staff, told reporters Tuesday at the Pentagon.

The photo and the details of the flight were first reported Monday by Defense One, citing unidentified defense officials.

The U.S. began evacuating government personnel, American citizens and vulnerable Afghans over the weekend. The 600-plus from Sunday might be among the most people ever flown on the 174-foot-long aircraft, Defense One reported.

Flight tracking software showed that it belongs to the 436th Airlift Wing based at Dover Air Force Base, Del., according to Defense One.

The four-engine jet with a wingspan of 169 feet, operating under the call sign Reach 871, wasn’t expected to take so many people, a defense official told the news site.

But many anxious Afghans who were cleared to evacuate on later flights pulled themselves onto its half-open ramp. The crew chose not to force them off.

“The crew made the decision to go,” one defense official said.

Some 640 Afghan civilians disembarked when the plane landed, the official said. The AMC photo caption confirmed that number.

The aircraft can be fitted to seat over 100, but procedure allows for the seating of larger numbers of people on the floor.

The crew apparently believed that there were as many as 800 on board. A recording of radio communications spread online Sunday in which one official expressed surprise at that estimate.

From an AF General who was on my team at NATO In this aircraft that is designed to transport 102.

The 800 on board have arrived safely.

The airport was overrun Sunday by fleeing Afghans, some with travel documents and others desperately seeking asylum without any paperwork as the Taliban entered Kabul.

Several people were killed in the ensuing chaos, including some who fell from a departing C-17 they were clinging to during takeoff.

A body was found in the wheel well of a C-17 that landed in a nearby country after flying out of Kabul, Politico and The Washington Post reported.

The U.S. rapidly deployed thousands of troops to secure the airport in a matter of days, including Marines and 82nd Airborne Division soldiers, Taylor said Tuesday. Troop numbers were expected to reach 4,000 by the end of the day.

Since the killing of two armed Afghans at the airport by U.S. troops Monday, there have been “no hostile interactions, no threat” and “no additional security incidents,” he said.

The airport has reopened to military and limited commercial flights, he said, and the goal is to ramp up in the next 24 hours to one military flight per hour to evacuate some 5,000 to 9,000 passengers a day.

Nine C-17s brought in 1,000 troops and equipment overnight, with seven departing jets taking 700 passengers back out, including about 165 Americans, Taylor said. The rest were applicants for a special immigrant visa and other foreign nationals.

Since late last month, the U.S. has evacuated over 2,000 SIV applicants, and President Joe Biden is preparing to bring a total of 22,000 refugees to sites in Virginia, Texas and Wisconsin.

But that still leaves tens of thousands more eligible Afghans behind, Army veteran Matt Zeller said Monday on MSNBC after Biden made televised remarks about the crisis. Zeller is co-founder of No One Left Behind, a nonprofit that helps resettle Afghans in the U.S.

“I’ve been trying to tell our government for years that this was coming,” he said. “We sent them plan after plan about how to evacuate these people. Nobody listened to us.”

The U.S. had enough personnel and equipment in the country to begin bringing them out months ago, before its drawdown, he said, but officials feared the “optics” of a hasty evacuation.

“They got exactly what they were most concerned of by failing to do what was right when we could have done it,” he said.