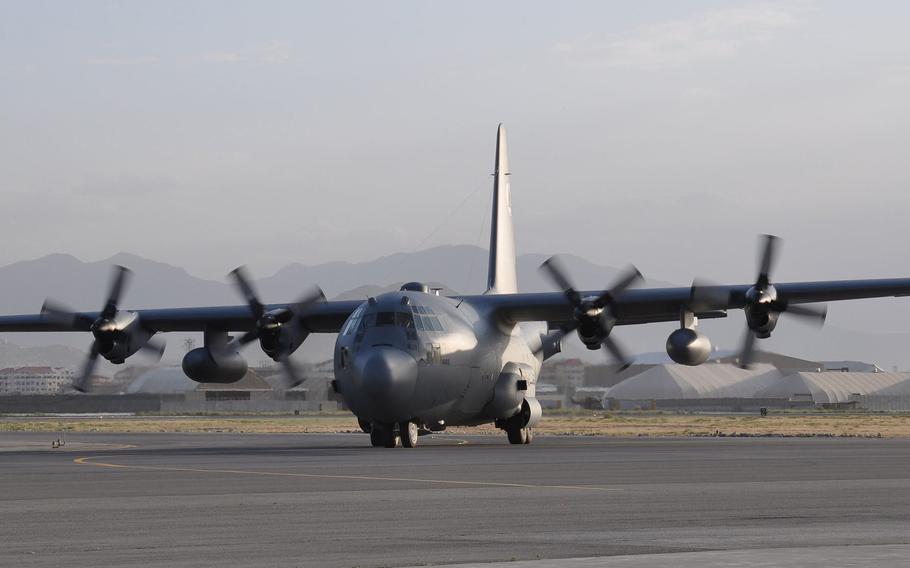 A C-130 Hercules touches down at Hamid Karzai International Airport, Kabul, June 20, 2015. The Pentagon announced on Thursday, Aug. 12, 2021, that three infantry battalions would be deployed to the airport to help evacuate U.S. diplomats. (Eydie Sakura/Department of Defense)

WASHINGTON — The United States is sending three infantry battalions to the international airport in Kabul within the next two days to help evacuate U.S. diplomats as the Taliban continues to capture cities throughout Afghanistan, chief Pentagon spokesman John Kirby said Thursday.

“We believe this is the prudent thing to do given the rapidly deteriorating security situation in and around Kabul,” he told reporters at the Pentagon.

One Army and two Marine Corps infantry battalions will deploy to Afghanistan from within the U.S. Central Command area of operations, Kirby said. Together, the units include about 3,000 troops.

The Pentagon announcement followed a security alert issued Thursday by the U.S. Embassy in Kabul urging all Americans to leave Afghanistan immediately as the Taliban had captured more than 10 provincial capitals during the final weeks of the U.S. military’s drawdown from the country, which began May 1.

State Department spokesman Ned Price said a “significant” number of embassy employees are leaving in the evacuation, but declined to specify how many. There had been about 4,000 personnel at the U.S. Embassy, which will now be reduced to a “core diplomatic presence.”

The soldiers and marines will assist with the safe movement of diplomats from the embassy to the airport, which are about four miles apart. They will also provide security at the airport, Kirby said.

In addition, a 3,500-person infantry brigade of the 82nd Airborne Division at Fort Bragg, N.C., will deploy to Kuwait within the next week.

“They will be postured and prepared if needed to provide additional security at the airport,” Kirby said.

U.S. aircraft and troops also could also help with airlift support to remove evacuees from the country, Kirby said. Until now, commercial and chartered flights have been the primary source of transportation out of the country for evacuees.

Kirby called the deployment “a temporary mission with a narrow focus” that will end by Aug. 31.

“The State Department has said they’re going to try to complete this reduction of their personnel by the end of this month, and these troops are being ordered in to help facilitate that purpose that mission along that timeline,” he said.

The Taliban has secured about two-thirds of Afghanistan in a series of wins against Afghan Security Forces as U.S. forces leave the country. On Thursday, the Taliban announced it had gained control of Herat, the third largest city in Afghanistan, despite U.S. airstrikes in support of the Afghan government forces, which outnumbers the Taliban by about 300,000 to 75,000.

The addition of 3,000 troops in Afghanistan is more than the amount of American service members who were in the country before the U.S. drawdown began. Pentagon officials would not say how many troops from the original mission remain in the country, though defense officials have said about 2,500 were there in April.

Price said the relocation of civilian personnel in Kabul “is not an abandonment” and the U.S. will keep its embassy in Afghanistan.

“This is not the wholesale withdrawal. What this is, is a reduction in the size of our civilian footprint,” Price said. “This is a drawdown of civilian Americans who will in many cases be able to perform their important function elsewhere, whether that’s in the United States or elsewhere in the region.”

While not classified as a combat operation, Kirby said the approximately 3,000 troops deployed to Hamid Karzai International Airport will be armed with “machine guns and mortars” to offer security and defend themselves.”

“Our commanders have the inherent right of self-defense and any attack on them can and will be met with a forceful and an appropriate response,” he said.

In a separate mission, a joint Army-Air Force support element of about 1,000 troops will go to Qatar “in the coming days” to help process special immigrant visa applicants after President Joe Biden on Thursday called for the acceleration of their evacuations.

The U.S. has been evacuating thousands of SIV applicants who are seeking to move to the U.S. after helping Americans as interpreters and translators during nearly 20 years of war in Afghanistan.

“I want to stress that these forces are being deployed to support the orderly and safe production of civilian personnel at the request of the State Department, and to help facilitate an accelerated process of working through [visa] applicants,” Kirby said.

After the drawdown, which is scheduled to end on Aug. 31, “less than 1,000” troops will remain in Afghanistan to protect the embassy, Kirby said Thursday.

Some congressional lawmakers responded strongly to the Pentagon announcement of troops deploying to Afghanistan.

Jim Inhofe, the ranking Republican on the Senate Armed Services Committee and a staunch critic of the withdrawal from Afghanistan, said he predicted the security situation in Afghanistan would deteriorate but now supports the additional support to protect American lives in light of the Taliban’s recent advancements.

“Deploying additional military [personnel] to support this effort — something that wouldn’t have been necessary if President Biden had listened to what I’ve been saying all along — is the right thing to do now to stanch some of the pain and bloodshed President Biden’s decision has caused,” the Oklahoma lawmaker said.

Sen. Thom Tillis, R-N.C., slammed Biden for his “disastrous decision” to order troops to depart the country and for setting an “arbitrary” deadline for their withdrawal.

“President Biden is completely detached from reality. I listened to his own generals express their grave concerns that Afghan forces were not prepared for an American withdrawal and the inevitable Taliban assault,” Tillis, who is also a member of the Senate Armed Services Committee, said in a statement. “And now, with every passing day, more towns and cities fall to the Taliban.”

However, Adam Smith, D-Wash., chairman of the House Armed Services Committee, said he supported the administration’s decision to reduce staff at the U.S. Embassy in Kabul and sending more forces to Afghanistan.

“The deployment of additional U.S. troops to facilitate this reduction is similarly prudent. While the security situation in Afghanistan is deteriorating, our strategy in the region must continue to evolve,” Smith said.