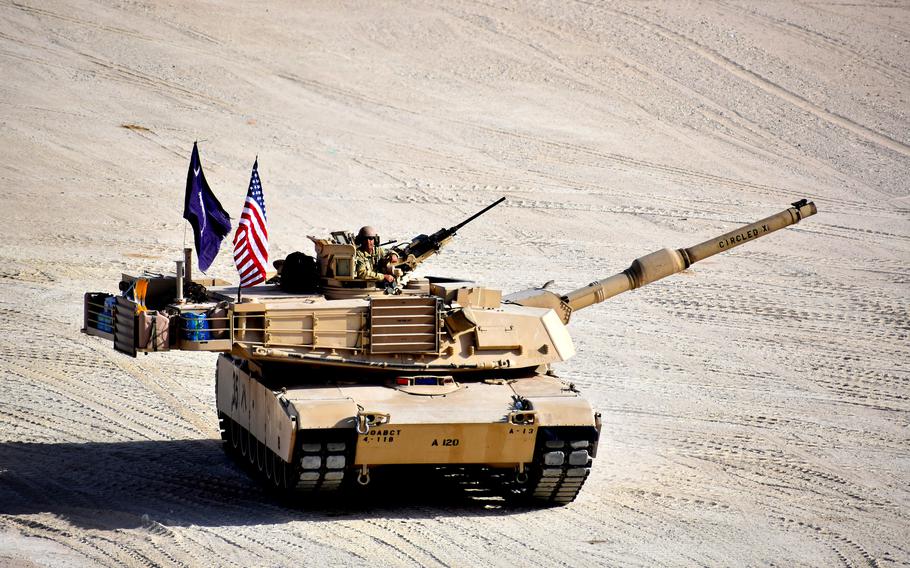 The 30th Armored Brigade Combat Team deployed to the Middle East in late 2019 expecting to train alongside partner nations and support operations against remnants of the Islamic State.

But that changed instantly once they reached Kuwait in October of that year. The National Guard unit did not expect a mission filled with epic flooding and other natural disasters, face-offs with Russian troops, or the rush to fan out across the region as tensions with Iran escalated rapidly, brigade officials recalled this week.

The some 5,000 Army National Guard troops who deployed with the brigade, which is headquartered in North Carolina and has subordinate units in South Carolina and West Virginia, faced “challenges of biblical proportions” during the almost yearlong tour, said Col. Charles Morrison, the unit’s commander. The brigade also had a battalion from the Ohio Army National Guard attached to it during the deployment.

But the 30th Brigade troops eventually spread into 10 additional countries, largely to respond to security crises.

“These guys faced challenges right from the get-go, right when they got on the ground,” Morrison said. “Originally, when Operation Spartan Shield came to us, this is a deterrence mission [focused] on Iran. … Conditions on the ground kind of changed that focus a little bit as far as the deterrence mission and of course the things that went on.”

From the time that the brigade began preparing for the rotation until it returned home in September 2020, its soldiers saw two major floods and an earthquake, faced off with Russian and Syrian troops and ISIS fighters, and responded to Iranian missile and drone attacks. All of that was followed by the unprecedented global coronavirus pandemic that reached them about mid-tour, Morrison and other brigade officials told reporters Tuesday during a news briefing.

“We even had a plague of locusts in Saudi Arabia with our battalion that was down there,” said Army Maj. Benjamin Bagwell, who was the brigade’s operations officer throughout the deployment. “When [Morrison] says ‘biblical proportions,’ it was like everything but frogs falling from the sky that happened to us during this rotation.”

Bagwell said a pair of natural disasters impacting the brigade's soldiers in the months before they deployed might have foreshadowed the challenges that they would eventually face in the Middle East.

In September 2018, just two weeks removed from a field training exercise, much of the 30th was ordered to state Guard duty to respond to the catastrophic flooding in North and South Carolina caused by Hurricane Florence.

Only a few weeks later, after deploying to the Army’s National Training Center at Fort Irwin, Calif., to rehearse for the Middle East deployment, the brigade was struck by a magnitude 7.8 earthquake at the Mojave Desert training post.

The brigade would face another flood in Kuwait shortly after deploying, when about a years-worth of rain fell in 24 hours on the small desert country, Bagwell said.

The challenges were not confined to natural disasters. By the end of the deployment, the brigade would send soldiers to Syria, Iraq, Saudi Arabia, Egypt, Lebanon, Bahrain, Qatar, the United Arab Emirates and Jordan. At any given time during the rotation, about two-thirds of the brigade was outside of Kuwait, Bagwell said, a much busier cycle than most brigades have experience in several years on the Kuwait mission — known as Operation Spartan Shield.

Many of the soldiers found themselves in combat. The brigade awarded 56 Combat Action Badges for soldiers who engaged with enemy forces. It also doled out nearly 2,000 Army Commendation Medals and Army Achievement Medals with combat "C" device, indicating the awards came in a combat environment, the brigade said. The brigade officials did not detail the actions that earned soldiers' combat awards, including what enemies they encountered. They did say nearly all of awards were for incidents that occurred in either Syria or Iraq.

The brigade sent troops into Syria shortly after arriving, Bagwell said. It was tasked with sending a Bradley Fighting Vehicle platoon into Syria as the Pentagon looked to bolster security at the oil fields in the eastern portion of the country that it had been tasked to hold. Additional 30th Brigade troops would later work to secure convoys ferrying troops and supplies between Iraq and Syria.

The soldiers were ostensibly sent to guard oil fields from ISIS fighters, but the 30th Brigade troops found themselves in unusual circumstances in which American and Russian troops often interacted.

The vast majority of interactions with the Russians and others operating in eastern Syria were professional, he said. Occasionally, they were tense.

In one encounter, Bagwell recalled, 30th Brigade cavalry troops escorted a supply convoy that came upon mines laid in the road, halting their convoy.

“Some Russians came up, [and] there were some words exchanged,” the major said, adding each side blamed the other for attempting to control traffic. “But nothing ever approached any kind of conflict with the Russians. … Most of the time it was very conciliatory.”

The brigade faced only a single attack from ISIS. The terrorists attempted to drop a mortar on some of its troops via a small drone that fell harmlessly to the ground far from the Americans, Bagwell said.

Many of the other issues that the 30th Brigade faced could be traced to escalating tensions between the United States and Iran during their rotation. The brigade sent a battalion of soldiers to Saudi Arabia to shore up security around U.S. air defense systems deployed there after drone and missile strikes on the Saudi oil infrastructure.

Then, after the United States killed Iran’s most powerful military leader, Maj. Gen. Qassem Soleimani, in a Jan. 3, 2020, drone strike at Baghdad’s airport, the brigade’s entire response force was activated to prepare for the potential fallout, which would include an Iranian ballistic missile strike into a U.S. base in Iraq. The brigade, Bagwell said, prepared to send tanks into Iraq, moving them onto an airfield to be loaded into cargo jets, but that call never came.

Two months later, the pandemic struck the region, and the 30th Brigade’s soldiers were called to establish quarantine locations for new troops coming into Kuwait, who were required to isolate for two weeks before beginning missions in the Middle East.

Since its return to the United States in September, Morrison said his brigade has been focused on resetting and is not yet scheduled for another overseas deployment. It is now preparing to field upgraded Abrams tanks and Bradley Fighting Vehicle during the next three years.

“We’re really looking forward to that,” the colonel said. “These citizen-soldiers overcame a lot — a lot of it unexpected — during this deployment.”