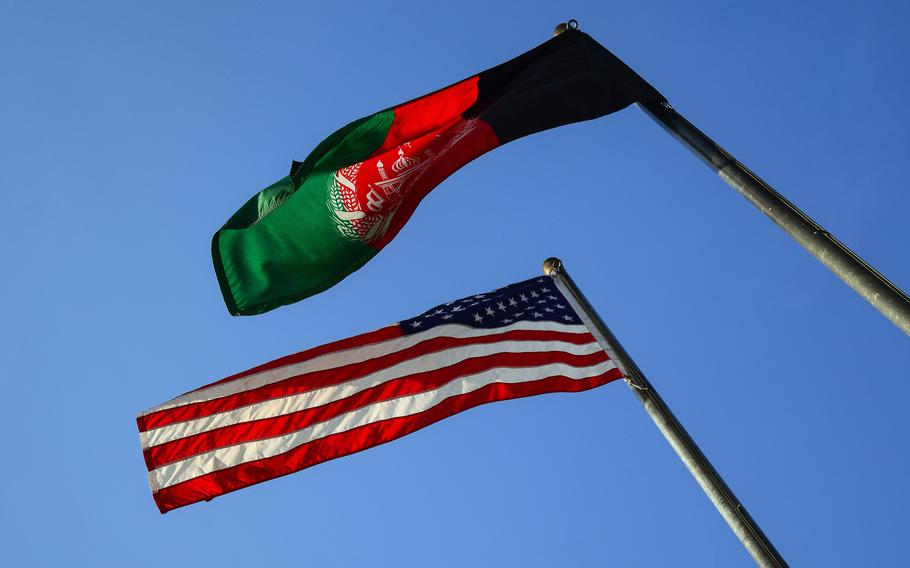 The American and Afghan flags fly over a base in Kabul, Afghanistan, in 2019. ( Ariel D. Partlow/U.S. Air Force)

FORT LEE (Tribune News Service) — The Pentagon's announcement Monday informed the area that it would be hosting a new set of neighbors in the near future — 2,500 Afghan nationals who aided the U.S. Armed forced during conflicts inside their native country.

This initial group coming to Fort Lee is the first of 20,000 people who are seeking a Visa in the country as part of the White House's "Operation Allies Refuge," seeking to give them stability in the turmoil of a U.S. military withdrawal from Afghanistan.

Many of the new arrivals worked alongside U.S. forces as translators or guides. The initial group includes 700 workers and 1,800 family members or other dependents.

But how is the Tri-Cities reacting to news of the area's newest neighbors? The answer: mostly positively and with open arms.

Hopewell resident Lisa Allala said on Facebook: "These are people that are now seen as [traitors] because they helped American soldiers do their job in a safe as possible way. Doing so put a target on their own backs. Loyalty is what they are owed. Welcome to America. May they all prosper here."

Her sentiment was echoed by many others on social media in the region.

Stanley Tappen, a resident who lives near the base, commented: "Fort Lee you run out of room feel free to buy my house, I'm right by the rear gate win win situation. It's the least you can do for these patriots."

A Colonial Heights-based private Facebook group shared The Progress-Index's initial story announcing the arrival of the 2,500 residents. Some initial comments expressed disbelief but were followed by an overwhelming number of commenters who supported the nationals coming to the country.

Josh Nichols, a member of the group, defended the Afghan nationals.

"I never went to Afghanistan, but I did spend 3 years in Iraq, one of which was spent embedded with the Iraqi Army on a MiTT. My half dozen or so interpreters were instrumental in so many ways. Without them I'd have been kidnapped or been otherwise unable to properly defend myself, not to mention unable to do my normal duties on a daily basis. I honestly feel most, if not all, of the interpreters I got to know well, are more 'American' than many Americans I see out in public. I have no problems bringing them here, housing them here, and fast tracking citizenship for them. They've earned it. And then some," Nichols commented in the group.

Some negative commenters across social media said they don't want the Afghans coming into the country. Most expressed gratitude for Afghan assistance during the conflict.

"Let us know what we can do as a community to help with their transition," commented Victorio Hernandez, "We will be standing by to lend a hand and provide support!"