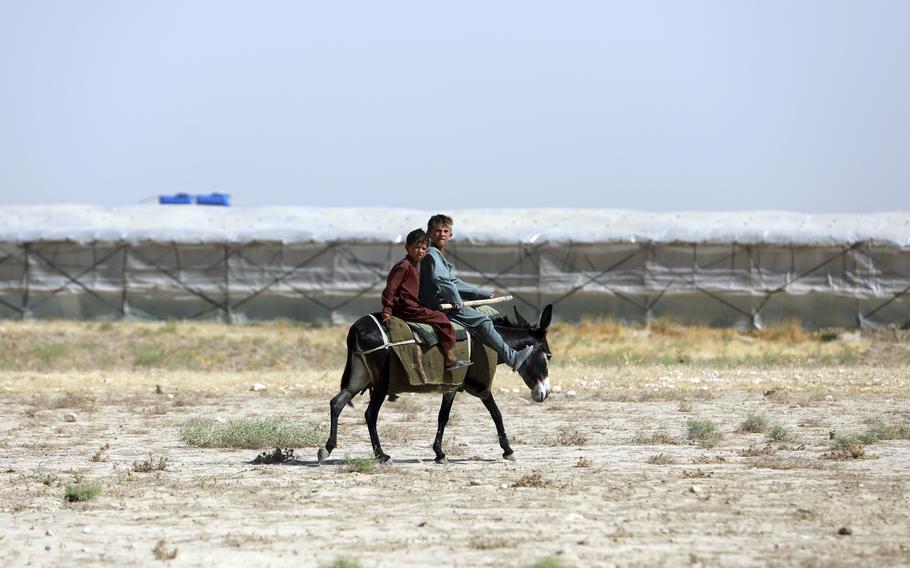 Boys travel on a donkey on the outskirts of Mazar-e-Sharif province north of Kabul, Afghanistan, Thursday, July 8, 2021. (Rahmat Gul/AP)

LONDON — Prime Minister Boris Johnson confirmed Thursday that most British troops have left Afghanistan, almost 20 years after the U.K. and other Western countries sent troops into the country to engage in what they described as a “war on terror.”

Johnson stressed that the threat posed by al-Qaida to the U.K. has substantially diminished, but he sidestepped questions about whether the hasty military exodus by the country and its NATO allies risks undoing the work of nearly two decades or leaves Afghanistan vulnerable to the Taliban, which has made rapid advances in many northern districts.

The prime minister declined to give details about the troop withdrawal, citing security reasons. But he said that “all British troops assigned to NATO’s mission in Afghanistan are now returning home,” adding that “most of our personnel have already left.”

“We must be realistic about our ability alone to influence the course of events. It will take combined efforts of many nations, including Afghanistan’s neighbors, to help the Afghan people to build their future,” Johnson said. “But the threat that brought us to Afghanistan in the first place has been greatly diminished by the valor and by the sacrifice of the armed forces of Britain and many other countries.”

He stressed that Britain remains committed to helping achieve a peace settlement in Afghanistan through diplomacy.

“We are not walking away. We are keeping our embassy in Kabul, and we will continue to work with our friends and allies, particularly our friends in Pakistan, to work towards a settlement,” Johnson said.

A total of 457 British servicemembers died in Afghanistan during the U.K.’s deployment, a much higher death rate compared to the U.K. involvement in Iraq. Britain’s last combat troops left Afghanistan in October 2014, though about 700 remained in Afghanistan as part of a NATO mission to train Afghan forces.

Britain’s Defense Ministry has said the withdrawal of the last troops would be “complete within a few months.”

The U.S. military announced Tuesday that 90% of American troops and equipment had already left the country, with the drawdown set to finish by late August. Last week, U.S. officials vacated the country’s biggest airfield, Bagram Air Base, the epicenter of the war to oust the Taliban and hunt down the al-Qaida perpetrators of the 9/11 terrorist attacks on America.

Most European troops have also quietly pulled out in recent weeks.

Defense Secretary Ben Wallace has said the U.K. had been put in a “very difficult position” to continue the mission once the U.S. announced its decision to leave.