As Western forces pack bags in Afghanistan, aid agencies brace for new round of displacement

Four decades after the first wave of Afghan refugees fled in the face of a Soviet invasion, and nearly 20 years after a U.S.-led invasion transformed life in the country, humanitarian agencies say they are bracing for another round of displacement in Afghanistan as the Taliban gains territory and Western forces prepare to withdraw in September.

This week, the top U.S. military commander in Afghanistan warned that chaos and civil war could be on the horizon. U.S. intelligence analysts fear the Afghan government could fall swiftly in the wake of the U.S. withdrawal. While President Joe Biden has sought to reassure Afghan leaders of Washington's "humanitarian commitment to the Afghan people," aid agencies say there's much to fear.

Nearby countries already hosting millions of Afghans say they are not equipped to handle a new influx if the security situation in Afghanistan continues to deteriorate and international programs to aid refugees remain underfunded.

Afghans fleeing war and violence have long sought safety in Pakistan, Turkey, Iran, Tajikistan and Uzbekistan. Many Afghans in these countries remain mired in poverty, undocumented and subject to limits on work amid constant pressure to leave.

"It is the responsibility of all international actors to continue working with Afghanistan to secure a lasting peace and to continue supporting countries hosting Afghan refugees," Indrika Ratwatte, Asia-Pacific bureau director for the United Nations High Commissioner for Refugees (UNHCR), said in a statement last month.

Unsafe and unstable conditions for Afghans in Pakistan, Iran, Turkey and other nearby countries could push more people to try to make the dangerous trek to Europe.

"The stability of Afghanistan goes beyond the region," said Ratwatte. "It's in everyone's collective self-interest."

In April, Biden announced a complete withdrawal of American troops from Afghanistan by Sept. 11, 2021, nearly two decades after the United States first invaded to oust the Taliban. The U.S.-backed Afghan government will take over full security responsibilities — but experts warn that the Taliban is poised to retake significant swaths of territory.

Since the start of the year, some 200,000 Afghans have been internally displaced, said Ratwatte, on top of an additional 380,000 in 2020. Just since May, the Taliban has taken over 80 districts. Last week, Taliban fighters took control of the main border crossing with Tajikistan as tens of Afghan soldiers fled to there for safety.

Around 1,000 Afghans a month since April have flown into Tajikistan to seek asylum, according to Ratwatte. Countless more cannot afford flights and have resorted to smuggling routes to sneak into nearby countries or try to make it to Europe, he said.

Biden has pledged to relocate tens of thousands of Afghans who worked with U.S. forces as drivers, interpreters and in other roles that have made them Taliban targets.

A resurgent Taliban, however, also threatens to roll back many of the gains Afghanistan has made, especially around women's rights and access to education, which is likely to push many more to flee, said Kemal Kirisci, a Turkey-based senior fellow with the Brookings Institution.

"Short of making sure that Kabul doesn't fall into the hands of the Taliban and that the gains made over this long period aren't rolled back, I honestly don't see what else can be done" to prevent further displacement, said Kirisci.

For decades, Pakistan and Iran have hosted a majority of the millions of Afghans on the run from war and conflict, along with neighboring Tajikistan and Uzbekistan and nearby Turkey.

Since 2002, after the fall of the Taliban, nearly 5.3 million Afghans have voluntarily returned through a UNHCR program — although rates have significantly slowed in recent years, and some who returned have left again.

Instead, by the end of 2019, Afghans were the world's third-highest forcibly displaced people. They were also among the top nationalities seeking asylum in the European Union or caught by European authorities while trying to enter.

The coronavirus and resulting restrictions on movement halted much of global migration, but experts predict it will quickly pick back up.

Pakistan is home to about 3 million Afghans, around half of whom are registered as refugees with the United Nations and the remainder who are either undocumented or in the country on other documents. Pakistan is not a signatory to the U.N. refugee convention and has urged Afghans to return home.

Iran hosts nearly 1 million registered Afghan refugees, in addition to more than 2.5 million who are undocumented or in the country on their Afghan passports. U.S. sanctions on Iran, however, have led to deteriorating economic conditions that have spurred many Afghans there to find their way to Turkey.

Afghans are now the second-largest nationality seeking asylum in Turkey, where many are undocumented. From Turkey, said Kirisci, many Afghans are enticed to try to illegally cross into Europe in search of safer opportunities.

In Tajikistan, which shares many linguistic and ethnic connections with Afghanistan, Afghans are banned from working certain jobs and living in certain areas.

A 2016 E.U.-Turkey deal halted much of the flow of refugees and migrants from Turkey to Europe following a massive flow of asylum seekers to the continent.

But Kirisci said an increase in Afghan refugees could tip the balance.

If new waves of Afghan refugees "arrive in Turkey, there is going to be a great likelihood of them trying to move on to the European Union," he said. "I predict there could be a crisis similar to the 2015 and 2016 crisis." 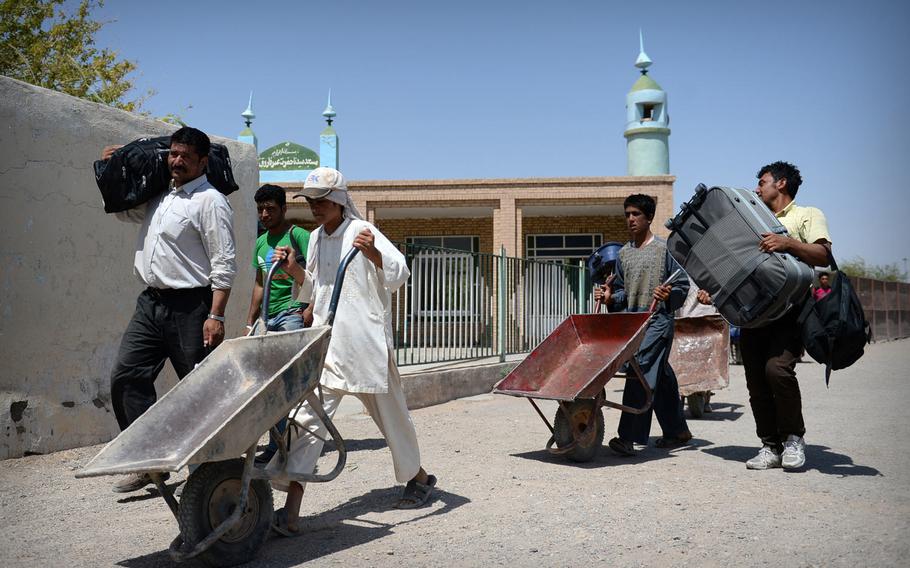 Buy Photo
Afghan refugees cross the border back into Afghanistan after being deported from Iran in July 2014. (Josh Smith/Stars and Stripes)