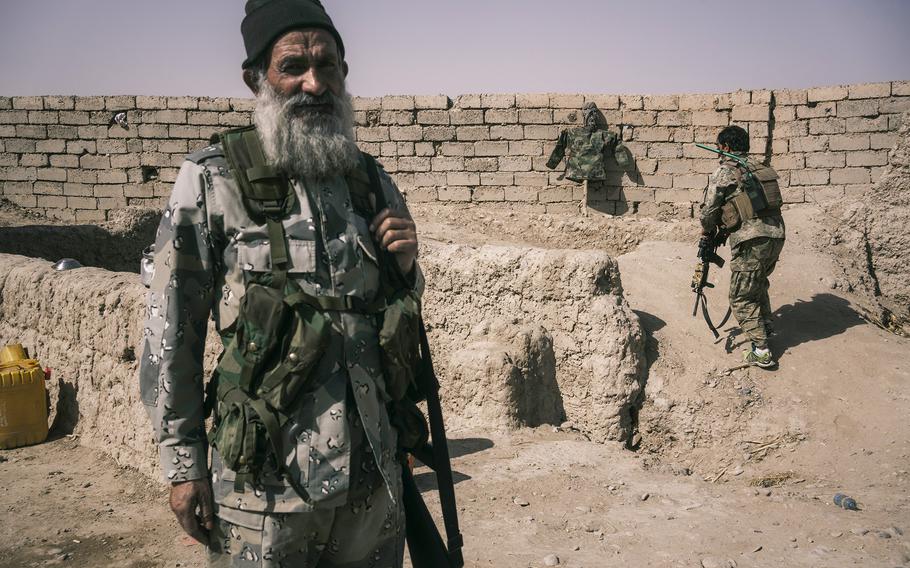 Afghan army soldiers occupy a position on the front line that is exposed to Taliban sniper fire at the Nazar outpost near Lashkar Gah on May 25, 2021. (Lorenzo Tugnoli for The Washington Post )

With U.S. troops set to depart Afghanistan after nearly 20 years, amid a surge in Taliban attacks, the fate of tens of thousands of Afghans who worked closely with the United States hangs in the balance.

President Joe Biden told reporters this week that Afghan allies who partnered with U.S. forces in Afghanistan as interpreters, drivers or in other roles would be relocated for their own safety.

"Those who helped us are not going to be left behind," he said.

That could mean evacuating tens of thousands of people, as the threat of a resurgent Taliban looms.

For those who track the history of U.S. conflict, the move to relocate allies as Washington loses appetite for a war carries echoes of the past. During the chaotic final days of the Vietnam War, as North Vietnam's Communist forces claimed victory, the United States evacuated thousands of South Vietnamese.

More recently, the United States has granted a trickle of visas to interpreters and others in Iraq who aided the U.S. military there.

But advocates for those left on the ground have criticized such efforts as plodding and insufficient in the face of urgent need. In an article for Bloomberg Opinion, retired U.S. Adm. James Stavridis pointed to the deaths of U.S. allies in Vietnam and said he did not want "that grim eventuality repeating itself."

At least 1,000 local interpreters who worked with U.S. forces in Afghanistan or Iraq have been killed, volunteer groups estimate, many while awaiting visas.

The Nixon administration unilaterally pulled troops out of Vietnam in 1973.

U.S. viewers watched on television as helicopters evacuated Americans from the embassy, whisking them away to Navy ships. But a far larger task awaited: evacuating America's South Vietnamese partners.

In total, some 7,000 people were evacuated during Operation Frequent Wind, including both Americans and South Vietnamese, making it the largest helicopter evacuation in history.

Many others made their own way out of the country, and in 1975 alone, the United States ultimately brought more than 100,000 people to Guam for processing before relocation. Some lawmakers have suggested Guam could play a similar role for Afghan evacuees.

But this was just the earliest part of what the International Rescue Committee would go on to call the "largest refugee resettlement effort in American history," with waves of Vietnamese refugees reaching the United States in the 1970s and 1980s.

Despite the large numbers of South Vietnamese who left the nation amid the Communist takeover, many were left behind. Often, they were killed or sent to "reeducation camps."

Gen. Mark Milley, chairman of the Joint Chiefs of Staff, told lawmakers recently that he did not want to "see Saigon 1975 in Afghanistan."

"The parallel between the Vietnam War and Afghan War is troubling," Jim Jones, a Vietnam combat veteran who later served on the Idaho Supreme Court, wrote for the Military Times last month. "We had a moral obligation to extract as many [allies] as possible but, instead, we abandoned them to a horrific fate."

The United States has evacuated other allies, most notably from Iraq.

In the aftermath of the Gulf War, the United States and coalition partners staged a humanitarian effort to defend the Iraqi Kurds who had stood with U.S. and international forces against the dictator Saddam Hussein.

With the implementation of a "no-fly zone" over northern Iraq, the effort helped establish an area of the country under Kurdish control, eventually leading to Iraq's autonomous Kurdistan region.

But after renewed threats from Hussein's forces in 1996, the U.S. military evacuated its local Kurdish staff in Iraq and told former employees and their families, as well as members of CIA-backed opposition parties or employees of U.S. nonprofits, that they could apply for refugee relocation.

Roughly 7,000 had made it to the United States within a year.

The United States and its allies invaded Iraq in 2003, toppling Hussein's regime, and remained there until 2011, before withdrawing and returning within three years because of the rise of the Islamic State. Over the years, many Iraqis who worked with Americans have been killed, and some increasingly fear they could be targeted by Iranian-backed militias.

The U.S. strike that killed Iranian military leader Qasem Soleimani in early 2020 has escalated the threat. "You got a large group of Iranian militias who actively hunt down people with American affiliations in Iraq," said Steve Miska, the author of "Baghdad Underground Railroad" and a retired U.S. Army colonel who worked with Iraqi translators.

However, there is a long backlog. There were an estimated 70,000 Afghans awaiting special visas that would allow them to resettle in the United States at the end of 2020. That number includes those who worked with the U.S. military and government as well as their immediate families.

In Iraq, the line is even longer, with 100,000 people left waiting. And even as the United States prepares to ramp up the evacuation of allies from Afghanistan, the Iraq program is on pause amid a visa fraud investigation.