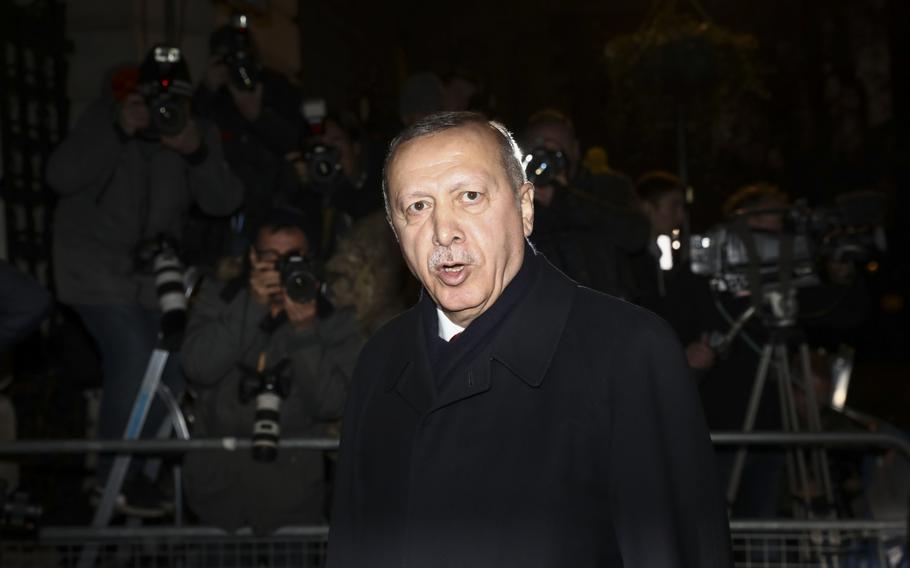 As the U.S. prepares to exit Afghanistan’s sprawling Bagram base after 20 years of war, NATO partner Turkey is willing to take the lead securing another airstrip — Kabul’s Hamid Karzai International, 40 miles to the south.

Throwing a protective ring around the landlocked nation’s airport is critical for those wanting to sustain a strategic presence in Afghanistan. That includes Western powers on the lookout for emerging terrorist threats, China with its now-stalled interest in vast mineral deposits and India, which wants Kabul as a key ally in its tussle with neighboring Pakistan.

But the proposed Turkish operation is being planned with few public details of the U.S. air support that would be rendered if the airport is targeted by an ascendant Taliban that has seized control of dozens of districts in recent weeks, and with power-sharing talks between the militant movement and President Ashraf Ghani’s government in Qatar at an impasse.

It’s a dangerous proposition for Ankara, which has provided security at the airport’s busy military section for six years as part of the NATO-led Resolute Support Mission.

Turkish President Recep Tayyip Erdogan, though, has his eye on the possible rewards. Taking on a job no one else wants would provide an opportunity to repair ties with Washington strained by years of disputes, most intensely Turkey’s purchase of a Russian missile-defense system that NATO considers a threat to its security.

“Safeguarding the airport is a way of making nice without giving too much up,” on issues that really count with the U.S., including the missiles, said Jenny White, professor at Stockholm University’s Institute for Turkish Studies.

“With its aggressive policies, Turkey has lost friends in every corner,” she said. “It needs to put a good face on for the financial markets and hopes to curry favor with the U.S. and Europe.”

Turkish officials privately acknowledge the challenges and were expected to push a Pentagon delegation visiting this week for the military, logistical and financial support they want. “All aspects of the issue are expected to be discussed,” Turkey’s Defense Ministry said in a statement.

In direct talks with the Taliban aimed at resurrecting its plan to host an Afghan peace conference, Turkey this month stressed its role would be strictly limited to guarding the airport, according to people directly familiar with the matter who couldn’t be identified discussing sensitive talks.

The Taliban response was swift: Turkish soldiers, while representatives of a “great Islamic nation,” are “occupiers” of Afghan territory and, just like the Americans, they should leave.

“Unless there is an agreement between the Taliban and Turkey to temporarily operate the Kabul airport, it is mission impossible due to colossal security risks,” said Nihat Ali Ozcan, a strategist at the Economic Policy Research Foundation in Ankara. “The question is who will prevent the Taliban from firing mortar rounds or rockets at the runway from afar?”

The airport has been struck repeatedly by bombings and rocket attacks over the years. One of the deadliest incidents was in 2018 when a suicide attack claimed by Islamic State targeted then-Vice President Abdul Rashid Dostum as he returned from Turkey. Dostum survived but nearly 80 people who had come to welcome him were killed or injured.

Under Erdogan, Ankara has embarked on an assertive foreign policy, branding itself as a growing Sunni Muslim power and wading into regional conflicts. It has urged Pakistan and Qatar to use their influence with the Taliban to get it to drop its opposition to Turkey’s airport plan, said the people, and would seek parliamentary approval to deploy soldiers in Afghanistan along with equipment, possibly including Turkish drones for surveillance.

The only certainty is that President Joe Biden is pulling out the remaining 2,500 U.S. troops ahead of a Sept. 11 deadline, the 20th anniversary of the terrorist attacks that precipitated the American invasion and the ousting of the Taliban leadership. Thousands of NATO troops who train and advise Afghan forces will follow.

Biden is scheduled to meet President Ghani and Abdullah Abdullah, chairman of Afghanistan’s High Council for National Reconciliation, in Washington on Friday.

Pentagon officials have repeatedly stressed that the U.S. will maintain “over the horizon” capabilities to strike back at the Taliban if they threaten U.S. interests and Afghanistan’s stability after American forces leave. But they’ve also emphasized that the Afghan military needs to step up its defense of the country.

In two interviews with Turkish media, Pakistan’s Foreign Minister Shah Mahmood Qureshi said the “withdrawal is taking place at a fairly rapid pace, but the peace process is moving at a snail’s pace.”

The U.S. should avoid catapulting Afghanistan into a period of “anarchy and civil war,” he said, such as the one that led to the Taliban’s rise in the 1990s — comments that will have raised eyebrows given the Pakistani military’s covert support for the movement since its inception.

Australia delivered the bluntest of messages. Citing an increasingly uncertain security environment, it has closed its Kabul embassy for now.