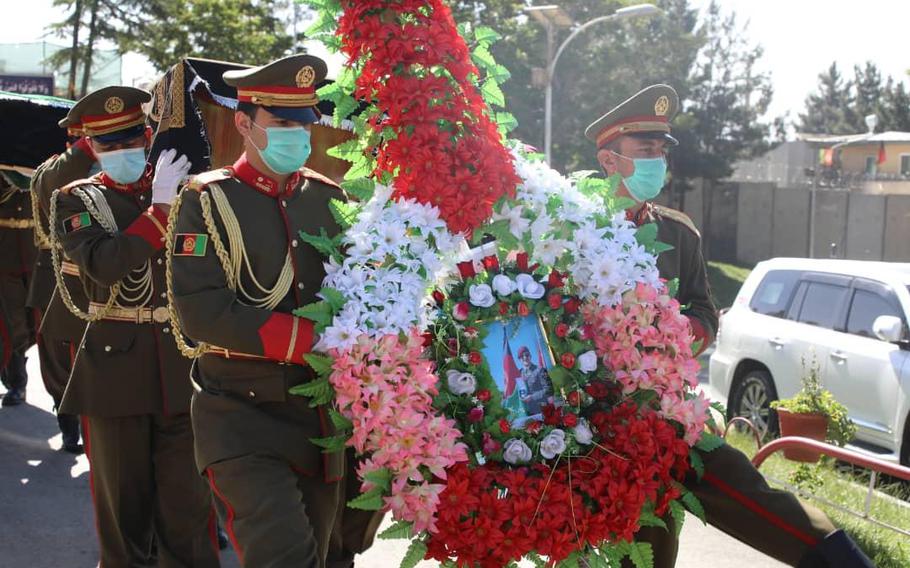 Mourners remember the life of Maj. Sohrab Azimi, an American-educated Afghan commando, in a funeral in Kabul, Afghanistan, June 19, 2021. (Afghan Ministry of Defense)

KABUL, Afghanistan — At least 21 members of Afghanistan’s special forces died fighting the Taliban last week after Afghan reinforcements failed to show up when the commandos were surrounded by the enemy and pounded by mortar fire, military and government officials said.

Most of the 170 troops who were supposed to back up the elite fighters during a battle in the northern town of Dawlat Abad stayed put out of fear that the operation had been leaked to the Taliban, an Afghan military official with knowledge of the operation said.

“The army did not come, police did not come, NDS did not come,” said the official, who asked to remain anonymous because he was not authorized to speak to the media. NDS is the acronym for the country’s intelligence agency, the National Directorate of Security.

“The other forces betrayed the commandos,” he said. 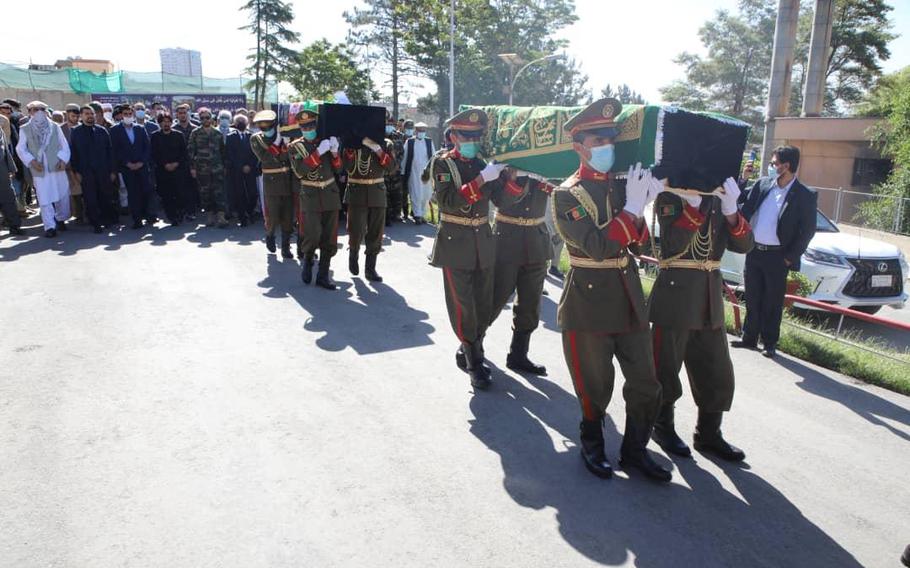 The caskets of Afghan elite soldiers killed in a battle with the Taliban are carried during a funeral in Kabul, June 19, 2021. One of the three soldiers remembered at the funeral was Maj. Sohrab Azimi, who was trained and educated by the United States. (Afghan Ministry of Defense) Mourners march in procession at the funeral in Kabul on June 19, 2021, of Maj. Sohrab Azimi and two other elite Afghan soldiers who died fighting the Taliban days earlier. (Afghan Ministry of Defense)

The failure to provide air and ground support to their own soldiers underscored fears that the Afghan military will struggle to hold off Taliban attacks when the U.S. completes its withdrawal from the country.

One of the soldiers who died was Maj. Sohrab Azimi, a decorated, U.S.-trained Afghan special forces officer who directed airstrikes on operations around the country. Azimi was posthumously promoted to brigadier general, a statement by the Afghan Defense Ministry said.

Azimi and the other troops were fighting to retake Dawlat Abad, a district center in Faryab province.

The battle plan, which was included in documents reviewed by Stars and Stripes, was to have 50 commandos recapture the town, after which troops from the army, police and intelligence agency would arrive to secure it and fend off counterattacks.

The special forces defeated a small Taliban force and captured the district center around 6 a.m. Wednesday, the military official said.

But a much larger Taliban unit surrounded Dawlat Abad soon afterward and shelled the commandos, destroying their Humvees with mortar fire, he said.

The trapped soldiers called for ground and air support, but neither materialized, the official said.

While 50 of the soldiers and police who were supposed to provide backup tried to reach the commandos, the large number of Taliban in the town forced them to retreat, he added.

U.S. Forces – Afghanistan declined to say whether they had received requests for air support or if they attempted to help the commandos.

Without backup, the soldiers were as good as dead, said two provincial council members for Faryab.

“How can you send only a unit of 50 commandos to an area which is under 100% control of the Taliban?” asked one of them, Abdul Ahad Elbek.

The military official and Elbek said they believe someone had informed the Taliban about the operation before it happened.

Afghan forces recaptured Dawlat Abad after the battle but pulled out soon afterward. As of Saturday, Dawlat Abad was back under Taliban control, Elbek said.

A funeral was held Saturday in Kabul for Azimi and two other soldiers who died in the fighting in Faryab. 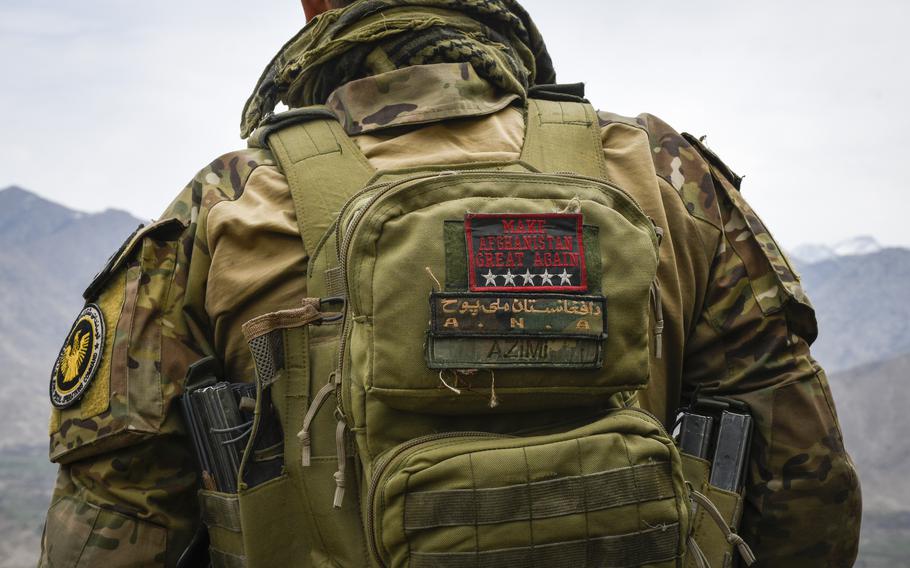 Buy Photo
Maj. Sohrab Azimi, a decorated Afghan special forces officer trained and educated by the U.S., looks over a valley in the northeastern province of Kapisa, Afghanistan on March 6, 2021. Azimi died fighting the Taliban in Faryab province on June 16, 2021. (J.P. Lawrence/Stars and Stripes)

His father, retired general Zahir Azimi, told Stars and Stripes a day earlier that unlike most of the children of Kabul’s generals and government ministers, his son had chosen to risk his life in combat to defend his country.

Images he saw of his dead son showed that he had died “fighting face-to-face with the enemy, not running,” he said.

Sorhab Azimi told Stars and Stripes in March that he believed he was deterring global terrorism by fighting in Afghanistan.

The Sunday before the attack, he sent a text message to friends, saying he was back in Kabul for some rest after battling the Taliban in Faryab for 50 days without a break. Buy Photo
Maj. Sohrab Azimi, a decorated Afghan special forces officer, looks over a valley in the northeastern province of Kapisa, Afghanistan, in March 6, 2021. Azimi was killed fighting the Taliban in Faryab province on June 16, 2021. (J.P. Lawrence/Stars and Stripes) 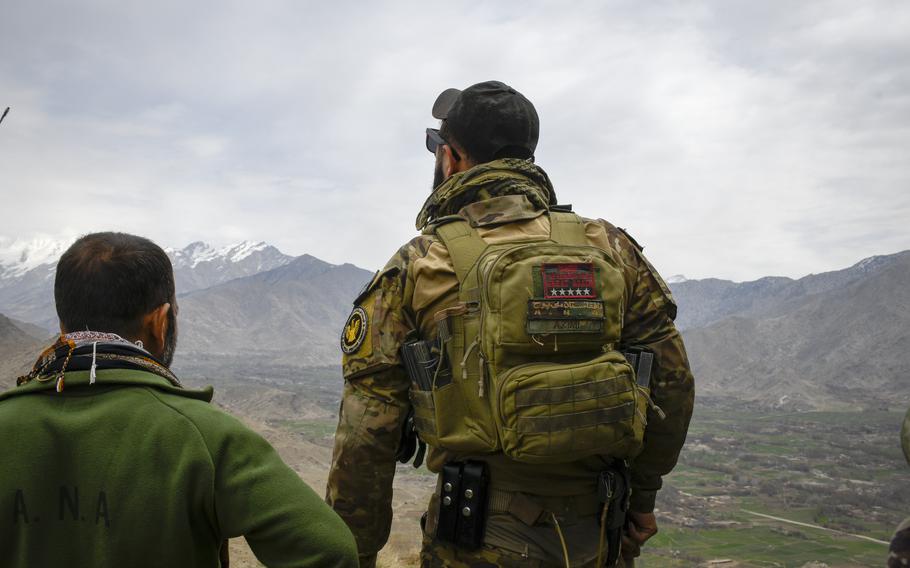 Buy Photo
Maj. Sohrab Azimi, a U.S.-trained Afghan commando, looks over a valley in Kapisa province in Afghanistan on March 6, 2021. Azimi was one of at least 21 Afghan special forces troops who were killed in an operation in Faryab province on June 16, 2021. (J.P. Lawrence/Stars and Stripes)

But three days later, he was ordered to return to the front.

“Back to Faryab,” he said in a text message before leaving for what would be his final fight.

The special forces deaths came amid reports of districts falling to the Taliban and hundreds of Afghan troops surrendering during weeks of fighting around Afghanistan. The country’s president, Ashraf Ghani, announced Saturday that he will replace his defense and interior chiefs.

Air support for Afghan troops could become a rarity once U.S.-funded contractors are gone, as foreign forces pull out of the country by a Sept. 11 deadline. It could be a matter of months before Afghanistan’s fleet is grounded due to a lack of maintenance, a report in The New York Times said Saturday.

U.S. officials are in talks to keep the Afghan air force flying, the report said.  The U.S. is also considering delaying its withdrawal from Bagram Airfield, one of two remaining U.S.-controlled bases in the country, The Washington Post reported.

But he declined to address whether the U.S. will provide combat air support to Afghan forces after the U.S. withdrawal is complete.