Doomsday Clock hits 90 seconds to midnight, its most dire prediction ever 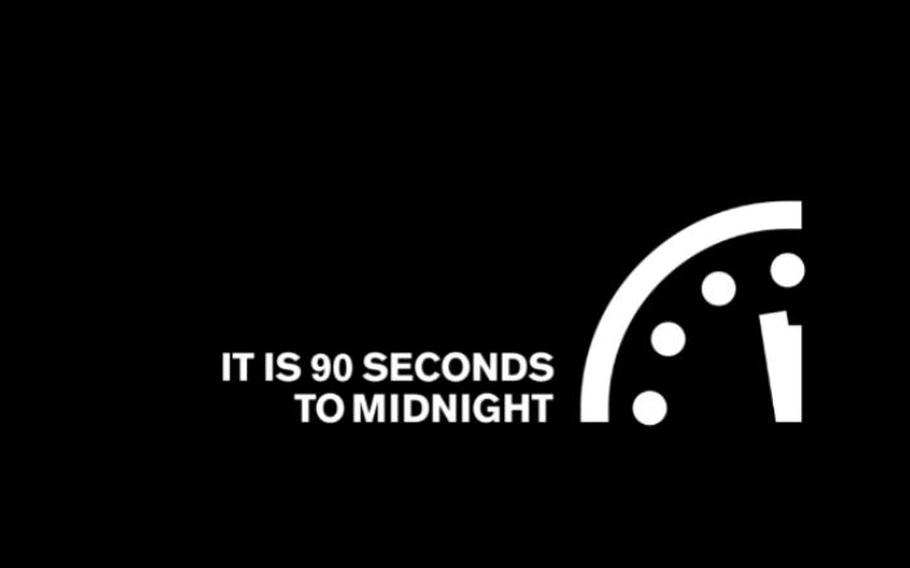 The people who run the clock say that’s largely a reflection of Russia’s war in Ukraine — including of the potential use of nuclear weapons and because the conflict is encouraging continued dependence on fossil fuels in Europe. (Doomsday Clock/Facebook)

The world is 90 seconds away from “midnight,” according to the Doomsday Clock, the closest it has ever been to the symbolic hour of apocalypse.

The people who run the clock say that’s largely a reflection of Russia’s war in Ukraine — including of the potential use of nuclear weapons and because the conflict is encouraging continued dependence on fossil fuels in Europe. For the first time, the announcement of the clock’s movement toward catastrophe was released in Russian and Ukrainian as well as English, something Rachel Bronson, CEO of the Bulletin of the Atomic Scientists, said the organization hopes brings the dire forecast “the attention it deserves.”

The time had been set at 100 seconds away from midnight since 2020. The Bulletin of the Atomic Scientists says it has been using the clock for more than seven decades to convey the level of risk from threats, from nuclear weapons to climate change.

This year’s is the first update to the clock since the war in Ukraine revived fears of a nuclear disaster in a year of fires and floods around the world. Here’s what to know about the metaphorical timepiece:

Q: What is the Doomsday Clock?

A: It’s not an actual clock — it’s a symbol designed by the Bulletin, featuring a quarter of a clock, with hands that serve as a metaphor for “how close we are to destroying our world.” The organization updates the setting of the hands each year — the clock is now at the closest point it has been to midnight since its inception in 1947.

At the time, the symbol was designed as an analogy for the threat of nuclear war, spurred by the Cold War arms race between the United States and the Soviet Union. The scientists originally behind the clock included some who had participated in the Manhattan Project, which produced the world’s first atomic bomb.

The clock setters have since considered a wider range of issues, including the impact of climate change, which was added in 2007. A physical version of the clock is at the University of Chicago.

Q: How does it actually work?

A: The Bulletin’s science and security board decides the clock’s setting after researchers and academics assess trends such as the number of nuclear weapons in the world, the rate of sea-level rise and government efforts, the organization says. It’s “not a model spitting out a number. It’s a judgment among experts about whether humanity is safer or at greater risk” compared with the previous year and with previous settings in the clock’s history, said Bronson, the Bulletin’s chief executive.

Critics have dismissed it as fearmongering, or questioned its usefulness and the methodology. In a 2015 essay, a University of Oxford researcher in global catastrophic risk cast doubt on the clock as a measurement of “actual risk,” writing that it was more a reflection of the “strong feeling of urgency” about the risks among the team who operate it.

Q: Why did the Doomsday Clock move closer to midnight?

A: The scientists who set the clock each year emphasized Tuesday that, in moving it closer to midnight, they intended to signal that humanity is less safe and at greater risk, and that global leaders need to act urgently to address nuclear proliferation, climate change and global health.

Mary Robinson, former president of Ireland and chair of the Elders, a group of former world leaders founded by Nelson Mandela, urged governments around the world to adopt Mandela’s “sense of urgency” and “spirit of humanity.” Elbegdorj Tsakhia, former president and prime minister of Mongolia and another member of the Elders, said world leaders are failing to do that.

“These existential threats laid out today should be cause for alarm,” Elbegdorj said. “Even more alarming is the continued failure of decision-makers to rise to the challenge despite urgent warnings they hear year after year.”

Q: How long had the Doomsday Clock been 100 seconds to midnight?

A: The clock was set to 100 seconds in January 2020, the first time it passed the two-minute mark since its creation. It had stayed there till Tuesday.

The Bulletin has also cited the spread of cyberattacks and disinformation in recent decisions. The clock was furthest from “midnight” in 1991, when it was wound back to 17 minutes after the Cold War was officially declared over.

During the past year, the conflict in Ukraine has led to rising tensions between Washington and Moscow and shelling near Europe’s largest nuclear power plant. “What we’ve been looking at is the unraveling of the international order ... when two countries that control the largest nuclear arsenals in the world are at odds,” Bronson said. “And what we’re trying to say [is] that we really need to find a way to contain this crisis.”

Q: What happens when the Doomsday Clock hits midnight?

A: “We don’t anticipate ever being able to set it at midnight because at that point we won’t be able to do it,” Bronson said. “We won’t have any tools left to respond.”

The countdown can get more complex with the threat of climate change. “As we’re talking about a slow and intense moving crisis,” Bronson added, “decisions we’re making now, we will feel in 30 years, and so how do we think about the clock?”

She hopes the timepiece can provide not only a warning, but also some reassurance, by reminding people that “we have moved the clock back in the past, and that we are capable of this.”

Q: Are there any signs of hope?

A: The scientists and academics behind the Doomsday Clock said there is reason to put faith in humanity’s ability to confront existential threats.

The coronavirus pandemic demonstrated that health practitioners and policymakers are “emboldened” to work together in moments of crisis, said Suzet McKinney, principal and director of life sciences for real estate company Sterling Bay.

Renewable energy technology is also poised to become the world’s largest source of energy within perhaps the next five years, said Sivan Kartha, a senior scientist at the Stockholm Environment Institute and lead author for the Intergovernmental Panel on Climate Change’s Sixth Assessment Report.

Kartha added he is encouraged by the climate activism of the world’s youngest generations, who will face the consequences of failures to constrain fossil fuel use and slow global warming.

“That’s something to definitely put some serious hope in,” Kartha said.