Western Ukraine, distant from the front lines, feels the burdens of war 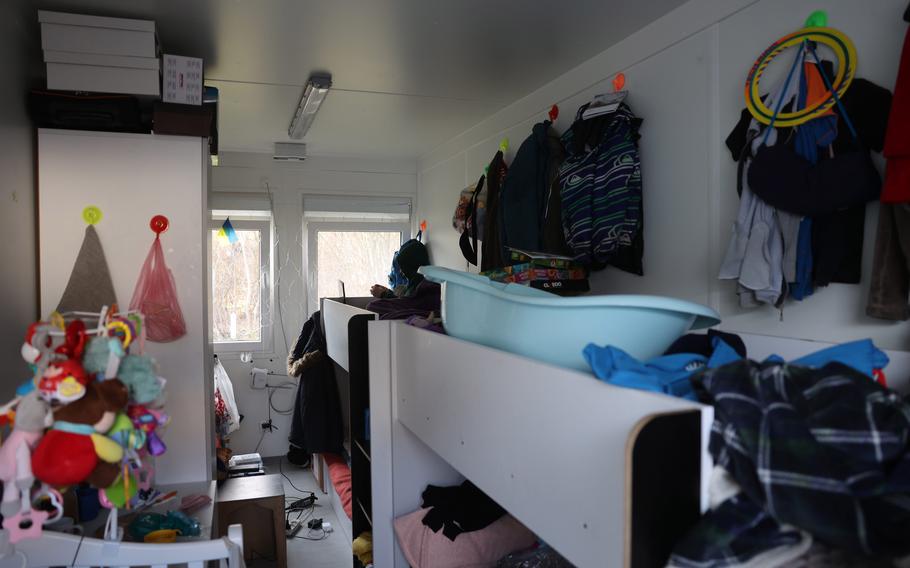 A single room in a camp of prefabricated housing for displaced Ukrainians, where Alina Pidchenko lives with her husband Serhii and their three children, on Jan. 2. (Roman Baluk/The Washington Post)

LVIV, Ukraine — Alina Pidchenko, her husband Serhii and their three children — ages 11, 9, and 3 months — now live in a single room in a camp of prefabricated housing for displaced Ukrainians on the edge of Lviv, the main city in Western Ukraine, about an hour’s drive from the border with Poland.

When the family escaped here nine months ago — from their home some 500 miles east in Kramatorsk, where Moscow’s troops were regularly shelling the civilian population — they thought they were moving to a safe haven. But the war has followed them.

Last Saturday, dozens of Russian missiles rained down across Ukraine, including in the west, where strikes severely damaged an electrical substation and a power plant in the Lviv and Ivano-Frankivsk regions, plunging hundreds of thousands of people, including the Pidchenko family, into cold and darkness. The power and heating went out for five hours, Alina said, and then again overnight as they slept.

No corner of Ukraine is untouched by the war — not even in the far west, a mostly agricultural region, dotted with farming villages and split down the middle by the Carpathian Mountains, which was long viewed as a place of refuge.

Russian airstrikes have reached into the mountains and even small towns as Moscow tries to destroy transmission lines connecting Ukraine’s power grid with its European Union neighbors. Millions of displaced people are strewn throughout the country, especially in the west. Soldiers’ funerals take place in villages hundreds of miles from the front line.

Last Saturday, in the central Ukrainian city of Dnipro, a missile strike destroyed an apartment building, killing at least 40 people. Local officials and residents in Western Ukraine say they are equally at risk.

“We’re afraid,” Alina Pidchenko said. “What happened with the building in Dnipro could happen in any city of Ukraine — it’s horrible.”

As in the rest of the country, officials in Western Ukraine have introduced regular daily blackouts lasting anywhere from four to eight hours to ration the electrical supply.

After each major missile attack, the region grows darker. A bombardment just before New Year’s Eve knocked out the lights for an extended period for some 90 percent of the city of Lviv and about 1.5 million people in the Lviv region as a whole, officials said.

Russian missiles have hit every electrical substation in the region — crucial nodes for electricity transmission, Lviv Mayor Andriy Sadovyi said, adding some were hit multiple times. “None survived — all are heavily damaged,” Sadovyi said in an interview. “This is catastrophic.”

But some missiles manage to avoid Ukraine’s air defenses. The solution lies in the West supplying more and better air defense systems, Sadovyi said — but the commitments so far, including one Patriot system from the United States, are unlikely to be enough.

Adding to the problem, the head of Lviv’s regional administration Maksym Kozytskyy said, is that the region produces little of its own energy supply. “At the moment, we are critically dependent on generation in other areas,” he said.

Even where the airstrikes have been limited, blackouts are the rule. In Mukachevo, in the Transcarpathian region on the Slovakian and Hungarian borders, once the sun sets, the city is cloaked in darkness. The Latoritsa River, which snakes its way through the town center, is a black ribbon.

In March, Ukraine connected its energy grid in western Ukraine to the European Union and began to export small amounts of electricity to its neighbors. Russia’s air campaign put an end to this, however. As a result of Russia’s attacks, Ukraine now consumes 25 percent more electricity than it produces, officials at Ukrenergo, the country’s main electricity distributor, said.

Kyiv is exploring the possibility of importing electricity from the E.U. “We would like Europe to help us with the supply of electricity - we would be grateful for that,” Kozytskyy said. But electricity in the E.U. costs double or triple Ukraine’s prices.

“These prices aren’t attractive to Ukrainian business, and for households it would be a shocking cost,” said Andriy Gerus, chairman of the energy, housing and utilities committee in Ukraine’s parliament.

Still, Moscow is well aware that E.U. energy imports are possible and has repeatedly targeted substations in the Lviv and Ivano-Frankivsk region to stop them. “The main issue is not just to make blackouts in western Ukraine — it was and is to disconnect Ukraine from the European grid,” said Mariia Tsaturian, a spokesperson for Ukrenergo.

The outages have hit local economies hard. In the Lviv region, where there have been more than 20 attacks on infrastructure, production dropped by 11 percent last year. “Businesses cannot run stably,” Kozytskyy said. “If this situation continues, we will have a downturn in the economy next year as well.” Other western regions reported similar declines.

But there are also bright spots. Thousands of businesses have relocated to the west for security reasons, boosting local tax revenue. Some 400 companies have moved to the Transcarpathia region alone, including a watermelon farm from Kherson in the south, said Roman Moldavchuk, a regional spokesman.

Four days after the Pidchenko family left their home in Kramatorsk in April, Russian missiles struck the city’s train station, killing 60 and wounding more than 100.

Three months ago, they moved into the prefabricated room in the Mariapolis displaced persons camp in Lviv, a community of about 300 people in small one-room dwellings, named after the eastern Ukrainian city of Mariupol, which Russian forces destroyed and occupied.

The family’s room is crammed with two bunk beds, a crib, children’s toys and possessions hanging from the walls.

Even with the slightly warmer weather, blackouts are a strain. During the most recent attack, the temperature was about 40 degrees during the day, but dipped below freezing overnight.

The temperature in their room was about 60 degrees. “To keep warm, we closed the door and didn’t let anyone come in or go out,” Alina Pidchenko said.

Some 250,000 displaced people are registered in the Lviv region, and another 150,000 may be living there unregistered, Kozytskyy said. And about 500 live in the county of Novy Yarichiv in the Lviv region — about an hour’s drive to the east of the city of Lviv, said the head of the local administration, Petro Sokolovsky.

Power outages are a regular occurrence, with the longest, in late November, having lasted about 30 hours. Many villages have installed large generators so that schools and other critical facilities can function.

But the biggest reminder of the war is the number of local residents fighting in the east. “About 600 of our men,” Sokolovsky said, out of a community of about 18,500. Many are dying.

On a recent day, the town of Novy Yarichiv, population 3,000, buried Yury Loyko, 30, who was killed on Dec. 29 by artillery shelling near Bakhmut, where some of the war’s fiercest fighting is taking place.

When the war broke out in February, he was working abroad, but he returned home to enlist, said Katya Kremin, a member of the local administration who knew Loyko.

The funeral was held in the town’s main church. Afterward, a line of cars and about 100 mourners moved slowly toward the cemetery on a hill about a mile away for the graveside ceremony.

“Every day they bring more dead back from Bakhmut,” said Oksana Servylo, 49, a school director in the neighboring village of Neslukhiv. “Young men are dying — very young men.”

“That’s the hardest thing for me — so many of my acquaintances are dying,” she said.

The Washington Post’s Roman Baluk in Lviv and Serhiy Morgunov in Kyiv contributed to this report.