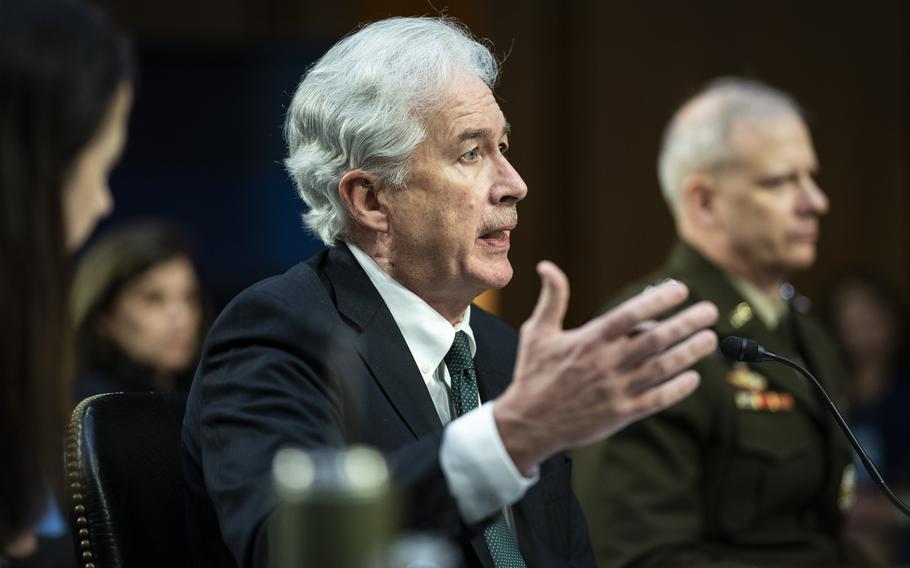 CIA Director William Burns traveled in secret to Ukraine's capital at the end of last week to brief President Volodymyr Zelenskyy on his expectations for what Russia is planning militarily in the coming weeks and months, said a U.S. official and other people familiar with the visit.

Burns' travel comes at a critical juncture in the 11-month war. Russian forces are mounting a massive assault near the eastern city of Bakhmut that is causing many casualties on both sides and forcing Ukraine to weigh its resources there as it prepares a major counteroffensive elsewhere in the country.

Top of mind for Zelenskyy and his senior intelligence officials during the meeting was how long Ukraine could expect U.S. and Western assistance to continue following Republicans' takeover of the House and a drop-off in support of Ukraine aid among parts of the U.S. electorate, said people familiar with the meeting. All spoke on the condition of anonymity to discuss the private high-level engagement.

Burns emphasized the urgency of the moment on the battlefield and acknowledged that at some point assistance would be harder to come by, the people said.

Zelenskyy and his aides came away from last week's meeting with the impression that the Biden administration's support for Kyiv remains strong and the $45 billion in emergency funding for Ukraine passed by Congress in December would last at least through July or August, those familiar with the discussion said. Kyiv is less certain about the prospects of Congress passing another multibillion-dollar supplemental assistance package as it did last spring, they said.

While hawkish Republicans in Congress continue to favor arming Ukraine, other conservatives have said they want to slash U.S. spending, in particular, the billions of dollars going to the war effort.

"Director Burns traveled to Kyiv where he met with Ukrainian intelligence counterparts as well as President Zelenskyy and reinforced our continued support for Ukraine in its defense against Russian aggression," a U.S. official said.

Burns is a respected figure among Zelenskyy's inner circle because of his accurate warning in January 2022 that Russian forces would seek to capture Ukraine's Antonov Airport in the opening stages of the Feb. 24 invasion. His message, delivered in person, was based on a U.S. intelligence assessment and is credited with helping Ukraine prepare to defend the airport and deny Russia a foothold needed to capture Kyiv.

Burns's skeptical view of Russia's willingness to negotiate also has endeared him to Zelenskyy's aides, who have bristled at suggestions Ukraine should consider talking to the Russians to end the conflict.

"Most conflicts end in negotiations, but that requires a seriousness on the part of the Russians in this instance that I don't think we see," Burns told PBS last month. "At least, it's not our assessment that the Russians are serious at this point about a real negotiation."

A CIA spokesperson declined to characterize what Burns relayed to Zelenskyy on Russia's military planning. Any insights he might offer would be highly valued in Kyiv.

At the moment, Ukrainian and Russian forces are locked in an intense war of attrition in eastern Ukraine around Bakhmut. The city has relatively little strategic value but it has taken on symbolic importance for both sides, in particular, Russia, which hasn't captured a major Ukrainian city since last summer.

Military analysts expect that an uptick in fighting this spring could determine the war's trajectory.

The United States and Western countries are rushing armored vehicles, artillery and missiles to Ukraine in an effort to bolster its military's firepower, hopeful the additional equipment will enable Zelensky's army to break through Russian-controlled areas such as Zaporizhzhia in an offensive expected to begin in the coming months.

Russia, meanwhile, is looking to launch its own offensive in the spring, stoking expectations that it will draft more troops following last September's mobilization of 300,000 men. Russian Defense Minister Sergei Shoigu unveiled a proposal in December to increase the country's military personnel to 1.5 million by 2026, up from 1.1 million now.

Moscow, which has recruited convicted felons in the war effort, has shown a willingness to endure heavy casualties. Last year, many of the recruits were highly inexperienced, given only two weeks of training before being sent to the front lines. But in recent months, Russia has improved its training, according to Western intelligence officials.

Burns, a former ambassador to Russia and senior State Department official, is one of the U.S. government's foremost experts on Russia. He has thought extensively about the place Ukraine takes in the Russian psyche.

During the George W. Bush administration, when the topic of NATO membership for Ukraine was discussed, Burns underscored the depth of Russian opposition to the idea in a memo to Condoleezza Rice, then secretary of state.

"Ukrainian entry into NATO is the brightest of all redlines for the Russian elite (not just [Vladimir] Putin)," he wrote. "I have yet to find anyone who views Ukraine in NATO as anything other than a direct challenge to Russian interests."

More recently, Burns has linked the Russian president's decision to invade Ukraine as a key step in his goal of returning Moscow to its former glory.

"He is convinced that his destiny as Russia's leader is to restore Russia as a great power," he told an audience at a security forum in Aspen in July. "He believes the key to doing that is to re-create a sphere of influence in Russia's neighborhood and he does not believe you can do that without controlling Ukraine and its choices. And so that's what produced, I think, this horrible war."

Burns also visited Ukraine in November. The trips offer the spy chief an opportunity to build trust with his intelligence counterparts and form a better understanding of the conflict, said people familiar with his travels.

Burns' latest trip came ahead of a busy week of engagements on Ukraine.

On Tuesday, Gen. Mark Milley, chairman of the U.S. Joint Chiefs of Staff, met with his Ukrainian counterpart in Poland for their first face-to-face interaction since the start of the war.

"There are times where we shouldn't hesitate," Zelenskyy told an audience in Davos, Switzerland, via video feed.

That same day, NATO defense ministers began a two-day meeting in Brussels, where the topic of Leopard tanks divided allies, with Poland threatening to send 14 tanks regardless of whether Germany approves. Technically, Germany's approval is required because it is the manufacturer of the Leopard 2.

"Either we will obtain this consent, or we will do the right thing ourselves," Polish Prime Minister Mateusz Morawiecki told a local broadcaster.