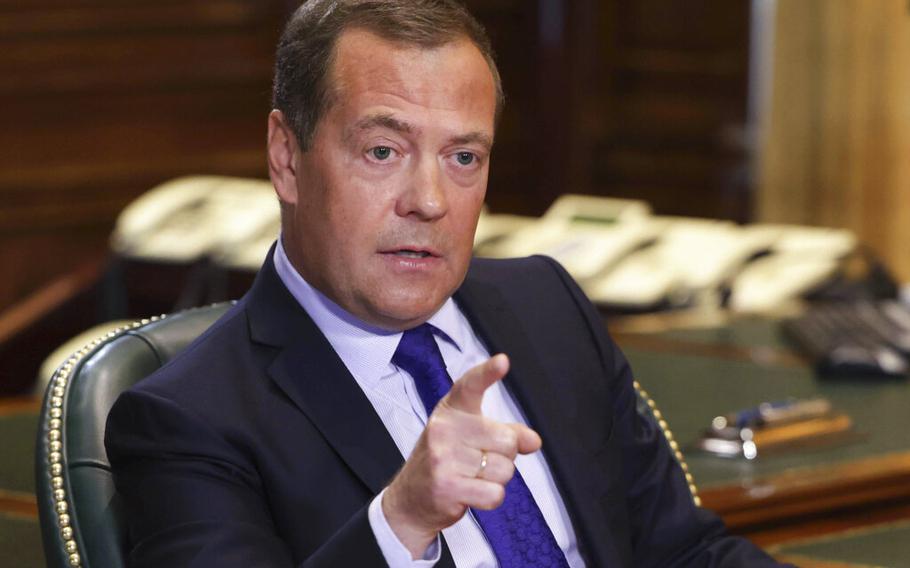 Medvedev's remarks were in response to a joint statement Friday by President Joe Biden and Kishida, in which the leaders said that "any use of a nuclear weapon by Russia in Ukraine would be an act of hostility against humanity and unjustifiable in any way."

Russian military leaders have discussed the potential use of a tactical nuclear weapon should their invasion of Ukraine face more setbacks.

Medvedev, who was president from 2008 to 2012 and is deputy chairman of Russia's Security Council, said in a Telegram post that the statement by Kishida and Biden amounted to "paranoia." He added that Kishida was a "servant" to the United States.

The only way for Kishida to atone for "such a shame" would be to perform a "hara-kiri" in front of a meeting of his cabinet, Medvedev said, using a Japanese term for an ancient ritualistic disembowelment.

Tass, Russia's state news agency, avoided repeating Medvedev's comments, writing only that he "described a method" for Kishida to repent.

As president, Medvedev was viewed optimistically in the West as a potential partner in forging improved relations. But in 2011, he went along with a switch that returned Putin to the presidency, and in early 2020, Medvedev resigned as prime minister to make way for constitutional changes that allowed Putin to serve further terms and tighten his grip on power.

Since Russia's full-scale invasion of Ukraine in February, Medvedev has sought relevance as an attack dog, using his Telegram account to issue bombastic and hyperbolic threats against the West, including that Russia would potentially use nuclear weapons, as well as insults against public figures he perceives as enemies. He has also called for Ukraine's "total capitulation."

Japan's Ministry of Foreign Affairs did not immediately respond to a request for comment about Medvedev's remarks.

The joint statement, issued while Kishida visited Washington last week to meet with Biden, addressed countering Russia and China, as Kishida repeated his concerns over the weekend that East Asia could face a fate similar to that of Ukraine amid Beijing's simmering ambitions in the region.

They said in their statement that China's recent actions have been "inconsistent with the rules-based international order."

In response to the statement, Wang Wenbin, a spokesman for China's Foreign Ministry, said the phrasing "smacks heavily of a zero-sum Cold War mentality and contains groundless smears and attacks on China." He alleged that the United States and Japan were "finding pretexts for military buildup and willful use of force."

Kishida, speaking through an interpreter at a news conference before the meeting with Biden, said the two countries are "currently facing the most challenging and complex security environment in recent history."