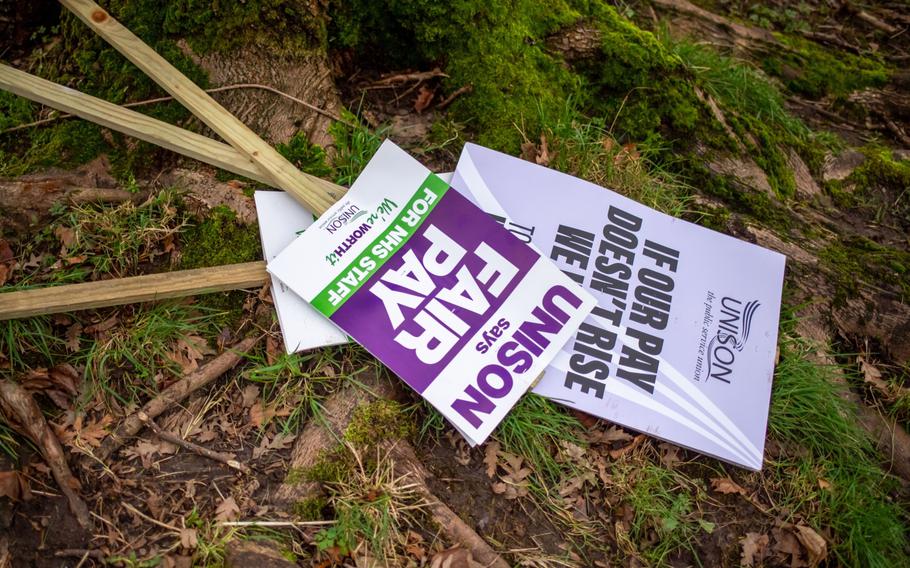 Placards sit on the ground during a strike action by ambulance workers near Central Ambulance Station in Manchester, England, on Wednesday, Jan. 11. Members of two unions, Unison and the GMB, are walking out as part of an ongoing row over real-terms pay cuts suffered by staff in the National Health Service. (Anthony Devlin/Bloomberg)

Workers for 124 government departments and agencies will walk out on Feb. 1, impacting a range of public services including driving tests, passport applications and welfare payments, the Public and Commercial Services union said in a statement.

It will be the biggest civil service strike in years and signals a “significant escalation” of industrial action, the union said. PCS General Secretary Mark Serwotka said he was meeting the government on Thursday to demand better pay for his members.

Sunak’s administration is already grappling to contain widespread industrial action across sectors including public transport, the National Health Service and the Border Force, as unions protest against real-terms cuts in pay. The government has so far failed to stem the workforce unrest, despite a series of meetings between ministers and unions on Monday.

The date chosen by the PCS — Feb. 1 — coincides with the “protect the right to strike” day called on Tuesday by the Trade Unions Congress. That’s designed to protest against the government’s proposed minimum service levels legislation, which seeks to limit strike action in key industries.

Some 14 health care unions representing more than 1 million workers on Wednesday said they won’t engage in talks over pay for the next fiscal year until the government discusses this year’s pay settlement — something Sunak’s administration has said it won’t do.

Ambulance workers held their second strike day of the winter on Wednesday, as the NHS struggles to deal with surging demand and massive backlogs. In the Commons, Sunak described that walkout as “terrifying” because it left people not knowing if they can get emergency treatment.

Meanwhile the bosses of three rail unions told a House of Commons panel they aren’t close to resolving their disputes with employers, despite months of strikes that have hampered commuters and disrupted travel over the Christmas and New Year’s period.

The National Health Service has reached breaking point this winter, with excess deaths in England and Wales jumping 20% above average at the end of 2022, according to figures on Tuesday from the Office for National Statistics. And even before the strikes, the ambulance service was failing to meet targets, with many patients waiting several hours for an ambulance.

On Wednesday, physiotherapy staff in England said they will strike on Jan. 26, expanding the dispute across the NHS. Nurses also plan two walkouts next week after staging their biggest ever strike in December, while ambulance workers plan to strike again on Jan. 23.

Pat Cullen, general secretary of the Royal College of Nursing, told Bloomberg Radio on Wednesday that the strikes would not be averted unless ministers start discussing a new deal for pay in the current year.

Providing a glimmer of hope, Health Secretary Steve Barclay finally agreed to discuss pay at Monday’s meeting, according to Unison’s head of health Sara Gorton. Speaking from a picket line in central London on Wednesday, she said unions had proposed a meeting with Chancellor of the Exchequer Jeremy Hunt to negotiate extra funding for a raise. Barclay “said he would take it back to Cabinet,” she added.

The government wants “to have constructive dialogue with the unions,” Sunak told the Commons in his first weekly question session of the year.

In a bid to dispel the perception that he can’t understand the NHS’s problems because he uses private health care, Sunak told the Commons that he is registered with an NHS doctor, though he also acknowledged using private health care in the past. Sunak’s press secretary later told reporters the premier no longer has private health insurance. In recent days, he’d declined to clarify his family’s health care arrangements.