No conclusive evidence Russia is behind Nord Stream attack 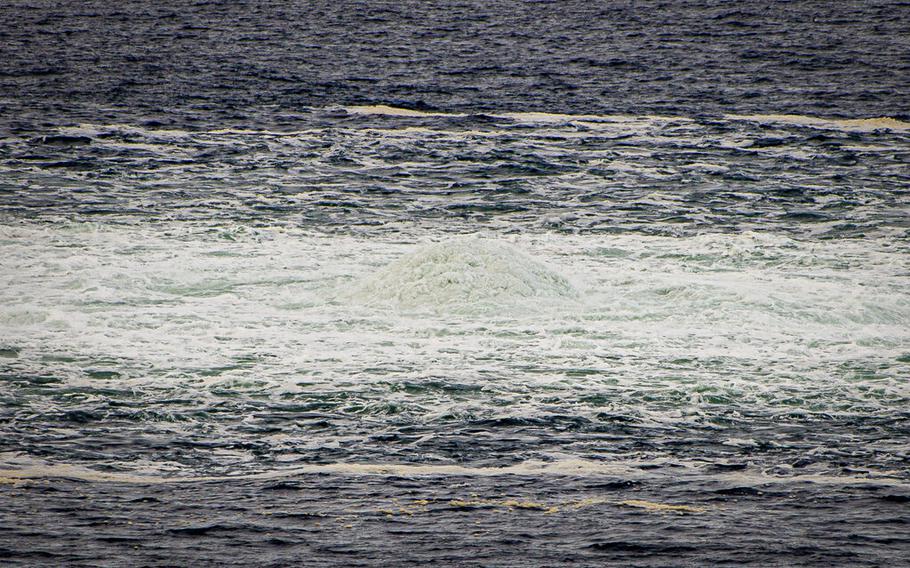 The water above a gas leak in the Baltic Sea churns and bubbles on Sept. 29, 2022. Following the suspected sabotage of the Nord Stream 1 and 2 pipelines that carry Russian natural gas to Europe, there were two leaks off Sweden, including a large one above North Stream 1, and a smaller one above North Stream 2. (Rune Dyrholm/Armed Forces of Denmark)

After explosions in late September severely damaged undersea pipelines built to carry natural gas from Russia to Europe, world leaders quickly blamed Moscow for a brazen and dangerous act of sabotage. With winter approaching, it appeared the Kremlin intended to strangle the flow of energy to millions across the continent, an act of "blackmail," some leaders said, designed to threaten countries into withdrawing their financial and military support for Ukraine.

But now, after months of investigation, numerous officials privately say that Russia may not be to blame after all for the attack on the Nord Stream pipelines.

"There is no evidence at this point that Russia was behind the sabotage," said one European official, echoing the assessment of 23 diplomatic and intelligence officials in nine countries interviewed in recent weeks.

Some went so far as to say they didn't think Russia was responsible. Others who still consider Russia a prime suspect said positively attributing the attack - to any country - may be impossible.

In the months after the explosions, which resulted in what was probably one of the largest-ever single releases of methane gas, investigators have combed through debris and analyzed explosives residue recovered from the bed of the Baltic Sea. Seismologists have pinpointed the timing of three explosions on Sept. 26, which caused four leaks on the Nord Stream 1 and 2 pipelines.

No one doubts that the damage was deliberate. An official with the German government, which is conducting its own investigation, said explosives appear to have been placed on the outside of the structures.

But even those with inside knowledge of the forensic details don't conclusively tie Russia to the attack, officials said, speaking on the condition of anonymity to share information about the progress of the investigation, some of which is based on classified intelligence.

"Forensics on an investigation like this are going to be exceedingly difficult," said a senior U.S. State Department official.

The United States routinely intercepts the communications of Russian officials and military forces, a clandestine intelligence effort that helped accurately forecast Moscow's February invasion of Ukraine. But so far, analysts have not heard or read statements from the Russian side taking credit or suggesting that they're trying to cover up their involvement, officials said.

Attributing the attack has been challenging from the start. The first explosion occurred in the middle of the night to the southeast of the Danish island of Bornholm. Scientists detected two additional explosions more than 12 hours later to the northeast of the island.

Given the relatively shallow depth of the damaged pipelines - approximately 80 yards at the site of one explosion - a number of different actors could theoretically have pulled off the attack, possibly with the use of submersible drones or with the aid of surface ships, officials said. The list of suspects isn't limited only to countries that possess manned submarines or deep-sea demolitions expertise.

The leaks occurred in the exclusive economic zones of Sweden and Denmark. European nations have been attempting to map which ships were in the region in the days before the explosions, in the hope of winnowing the field of suspects.

"We know that this amount of explosives has to be a state-level actor," Finnish Foreign Minister Pekka Haavisto said in an interview this month. "It's not just a single fisherman who decides to put the bomb there. It's very professional."

Regardless of the perpetrator, Haavisto said that for Finland, which isn't a Nord Stream client, "The lesson learned is that it shows how vulnerable our energy network, our undersea cables, internet . . . are for all kinds of terrorists."

Russia remains a key suspect, however, partly because of its recent history of bombing civilian infrastructure in Ukraine and propensity for unconventional warfare. It's not such a leap to think that the Kremlin would attack Nord Stream, perhaps to undermine NATO resolve and peel off allies that depend on Russian energy sources, officials said.

But a handful of officials expressed regret that so many world leaders pointed the finger at Moscow without considering other countries, as well as extremist groups, that might have the capability and the motive to conduct the attack.

"The governments that waited to comment before drawing conclusions played this right," said one European official.

Condemnation of Moscow was swift and widespread. On Sept. 30, four days after the explosions, U.S. Energy Secretary Jennifer Granholm told the BBC it "seems" Russia was to blame. "It is highly unlikely that these incidents are coincidence," she said.

German Economy Minister Robert Habeck also implied that Russia, which has consistently denied responsibility, was responsible for the explosions. "Russia saying 'It wasn't us' is like saying 'I'm not the thief,'" Habeck told reporters in early October.

An adviser to Ukrainian President Volodymyr Zelensky called the ruptures "a terrorist attack planned by Russia and an act of aggression toward [the European Union]."

"No one on the European side of the ocean is thinking this is anything other than Russian sabotage," a senior European environmental official told The Washington Post in September.

But as the investigation drags on, skeptics point out that Moscow had little to gain from damaging pipelines that fed Western Europe natural gas from Russia and generated billions of dollars in annual revenue. The Nord Stream projects had stirred controversy and debate for years because they yoked Germany and other European countries to Russian energy sources.

"The rationale that it was Russia [that attacked the pipelines] never made sense to me," said one Western European official.

Nearly a month before the rupture, the Russian energy giant Gazprom stopped flows on Nord Stream 1, hours after the Group of Seven industrialized nations announced a forthcoming price cap on Russian oil, a move intended to put a dent in the Kremlin's treasury. During Putin's long stretch in office, the Kremlin has used energy as an instrument of political and economic leverage, employing the threat of cutoffs to bully countries into going along with its goals, officials said. It didn't make sense that Russia would abandon that leverage.

Germany had halted final authorization of Nord Stream 2 just days before Russian forces invaded Ukraine. But the pipeline was intact and had already been pumped full with 300 million cubic meters of natural gas to ready it for operations.

European and U.S. officials who continue to believe that Russia is the most likely culprit say it had at least one plausible motive: Attacking Nord Stream 1 and 2, which weren't generating any revenue to fill Russian coffers, demonstrated that pipelines, cables and other undersea infrastructure were vulnerable and that the countries that supported Ukraine risked paying a terrible price.

Haavisto noted that Finland has taken steps to strengthen infrastructure security since the explosions. Germany and Norway have asked NATO to coordinate efforts to protect critical infrastructure such as communication lines in the North Sea and gas infrastructure.

"But it's at the same time true that we cannot control all the pipelines, all the cables, all the time, 24/7," Haavisto said. "You have to be prepared. If something happens you have to think, where are the alternatives?"

The war prompted European countries to build up stockpiles of alternative energy, making them less dependent on Russian sources. But the Nord Stream attack has left many governments uneasy about the lengths to which Russia or other actors might go.

Swedish Foreign Minister Tobias Billstrom said his government was waiting for the country's independent prosecutor's office to complete its investigation into the explosions before reaching a conclusion. Sweden, along with Denmark, increased its naval patrols right after the attack.

"We have spoken about [the explosions] as part of the view that the security situation in the northern part of Europe has deteriorated following Russia's aggression on Ukraine, with all the implications that it has," Billstrom said in an interview this month.

The prospect that the explosions may never be definitively attributed is unsettling for nations like Norway, which has 9,000 kilometers (5,500 miles) of undersea gas pipelines to Europe.

A Norwegian official said Norway is attempting to strengthen security around its own pipelines and broader critical infrastructure. It is investing in surveillance; working with Britain, France and Germany to intensify naval patrols; and trying to find ways to keep oil and gas flowing in the event of another attack.

Norway is also investigating the appearance of unidentified aerial drones around its oil and gas facilities around the time of the Nord Stream attacks.

"It's not a good thing," the official said, of the possibility that the Nord Stream explosions may remain unsolved. "Whoever did it may get away with it."

The Washington Post's Souad Mekhennet and Meg Kelly contributed to this report.