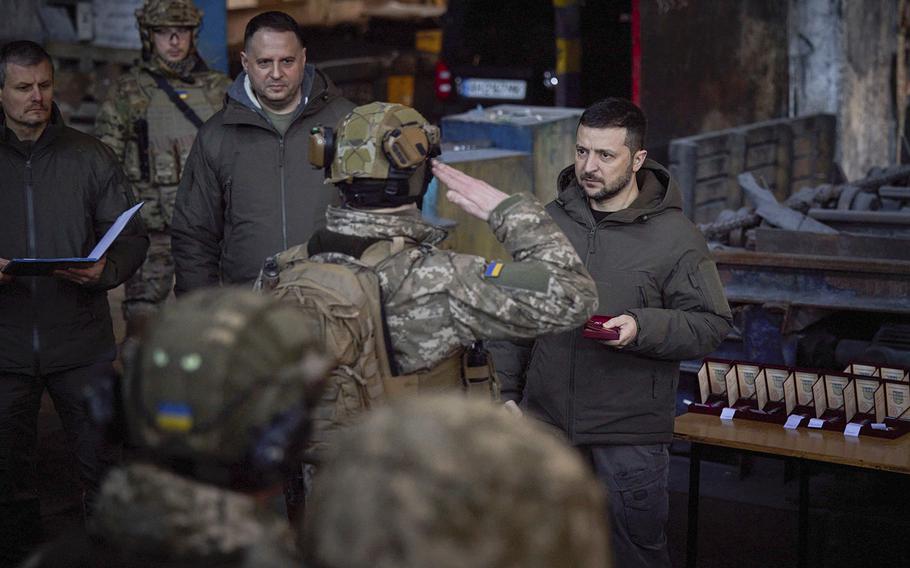 KHARKIV, Ukraine — Ukrainian President Volodymyr Zelenskyy on Tuesday made an unexpected visit to troops defending Bakhmut, currently the site of some of the bloodiest fighting in the war, as his forces try to hold off a desperate Russian assault on the city in the eastern Donetsk region.

The president’s trip, which was confirmed by Zelenskyy spokesman Sergii Nykyforov on his Facebook page, highlighted the carnage in Bakhmut, where Russian forces, including mercenaries, have been pushing for months to claim a battlefield victory after a string of defeats and retreats in the south and east of Ukraine.

It was not immediately clear where in Bakhmut the president had visited, or how close he had ventured to front-line positions. Amid heavy fighting in recent days, some military analysts said that the Russians were making incremental advances and had warned that Ukrainian troops were at risk of being encircled.

“The President visited the front positions of one of the mechanized brigades, whose personnel confronts the enemy on the approaches to the city,” the Facebook post said. “The Head of State heard the commander’s report on the operational situation, material and technical support and suggestions for further action. While in the area of combat, Zelenskyy thanked the Ukrainian soldiers for the courage, resilience and strength they demonstrate by repelling enemy attacks.”

A video released by a state-run media outlet showed Zelenskyy, wearing an army green winter jacket, standing by a table with 17 medals on display, then heartily shaking hands with soldiers as he handed out each award. Zelenskyy also posted about the visit on his official Telegram channel.

Ukrainian officials have sought to draw a contrast between Zelenskyy’s willingness to visit his troops on front-line positions or in recently liberated cities, such as Kherson, and Russian President Vladimir Putin’s apparent lack of trips to the front lines, where critics say Russia has deployed thousands of conscripts, many without proper equipment or training.

Military analysts have questioned why Putin seems willing to pay such an enormous price to take Bakhmut, which lacks obvious strategic importance.

Much of Russia’s fighting in Bakhmut has fallen to the Wagner Group, a Russian mercenary company. In his nightly address on Monday, Zelenskyy called Bakhmut the “hottest spot” on the front.

The Ukrainians have for weeks defied predictions that Bakhmut was on the precipice of abandonment to Russian control. Russian forces have attempted to encircle the city, leading to bloody fighting for incremental gains in the south and east and in some of the suburban outskirts outside the city, according to military analysts.

Ukrainian forces said they had also repelled an additional attempt by Wagner fighters in the northeast section of the city, the Institute for the Study of War, a Washington-based think tank, said Monday.

Russian military bloggers reacted to Zelenskyy’s reported visit by claiming it reflected an attempt to shore up Ukrainian support for the broader war ahead of its loss of the city.

Fighting has continued at a slower pace along a roughly 620-mile front in eastern Ukraine.

The Institute for the Study of War also reported Russia had intensified ground attacks since Sunday in several areas along the front, including near the regional capital of Donetsk and the city of Kreminna farther north in the Luhansk region. Speculation has mounted that Ukraine may try to launch a southward offensive through the Zaporizhzhia region, aiming to cut off the Russian-controlled “land bridge” between mainland Russia and Crimea, which was invaded and illegally annexed in 2014.

In his address on Monday, Zelenskyy said that the fight for Bakhmut is “breaking” the Russian forces. Ukraine’s military has previously estimated that as many as 100 Russian troops are being killed each day in Bakhmut.

“Since May, the occupiers have been trying to break our Bakhmut, but time goes on,” Zelenskyy said. “And Bakhmut is already breaking not only the Russian army but also Russian mercenaries who came to replace the lost soldiers of the occupiers.”