Kremlin says no peace for Ukraine by end of year 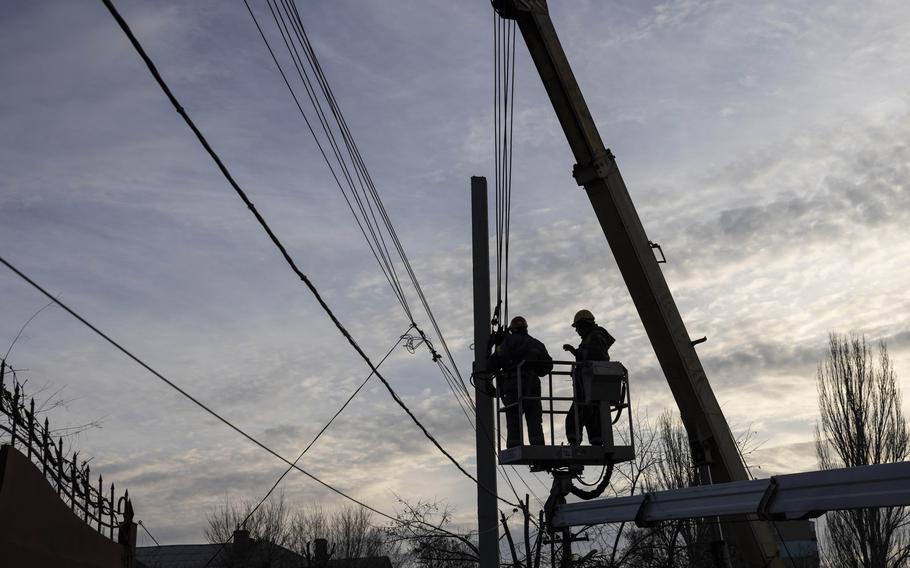 The withdrawal of Russian troops from Ukraine by the end of the year is "out of the question," Kremlin spokesman Dmitry Peskov said on Tuesday, adding that any peace deal with Kyiv was "impossible."

During a briefing with reporters, Peskov said that Kyiv needed to consider the "new realities" that had arisen since Russia's invasion of Ukraine, including Moscow's illegal annexation of four regions in eastern and southern Ukraine.

"Without taking these realities into account, any progress is impossible," Peskov said.

Peskov issued his call for a reality check in Kyiv even as Moscow still insists on referring to its nearly 10-month-old war as a "special military operation" and as Russian forces do not fully control any of the four Ukrainian regions — Luhansk, Donetsk, Kherson and Zaporizhzhia — that President Vladimir Putin claims to have seized.

As the end of the year approaches, the holidays during wartime are starting to look fittingly gloomy for many Russians, who have been asked by authorities to hold "modest" celebrations out of respect for soldiers fighting on the front.

The Kremlin also announced Monday that for the first time in a decade, Putin will not hold his marathon end-of-year news conference.

The move breaks with an annual tradition that started in the early years of Putin's presidency, and the cancellation, which had been widely expected, was the latest indication that Russia's strongman leader is becoming increasingly remote.

The event is much anticipated by the Russian press corps and is known for stretching over several hours. In recent years, it has become a strange, often sycophantic spectacle with a smattering of more rigorous queries thrown in. It is one of the rare occasions journalists from outside the Kremlin pool, including foreign reporters, can ask Putin direct questions.

The lengthy session typically gives the Kremlin a chance to portray Putin as transparent, accountable and more accessible than his Western counterparts. In fact, attendance is carefully controlled and Putin has overseen increasingly harsh repression of independent Russian media.

Although Peskov did not give reasons for the cancellation, the announcement follows battlefield losses for Russia in Ukraine and rising domestic tensions after a military mobilization drive was launched in September and led hundreds of thousands of fighting-age men to flee the country.

Meanwhile, dozens of countries on Tuesday pledged more than $1 billion in additional aid to Ukraine at a conference in Paris, offering short-term support for Ukraine's energy network and other civilian infrastructure, as the country faces a difficult winter.

The conference, which brought together representatives from 24 international organizations and 46 countries, followed two months of sustained Russian missile and drone attacks that have decimated Ukraine's critical infrastructure, disrupting electricity, water and heating as winter sets in.

More than $440 million of the total aid pledged is expected to be directed to Ukraine's energy network.

French officials said the total amount would likely rise, as millions of pledged dollars were still being allocated. In a video address earlier on Tuesday, Zelensky urged the international community to help repair his country's energy systems, and he called for at least $850 million in assistance.

European Commission President Ursula von der Leyen, who attended Tuesday's conference, pledged practical support. The European Union's 27 countries, she said, were "working to increase the amount of electricity we can trade between Ukraine, Moldova and the rest of Europe."

Von der Leyen added: "We need to keep the Ukrainian grid functioning, despite the Russian bombs."

U.S. Deputy Secretary of Energy David Turk, who represented the Biden administration at the Paris conference, called it "a success," highlighting the presence of countries such as India and Indonesia.

"The hope would be that countries, many countries across the world, not just in Europe, really step up and help the Ukrainian people," Turk said in an interview. "And I think we made some progress on that front at this meeting."

Turk said part of the broader U.S. contribution that was discussed in Paris was a shipment of power equipment that was already on its way to Ukraine with a handover expected in Poland, as part of the Biden administration's efforts to help rebuild Ukraine's battered grid. Further shipments are expected soon, and some of the sent items could be deployed immediately by the Ukrainians, Turk said.

The pledges made on Tuesday are contributions "that can be mobilized immediately, between now and the winter months," French Foreign Minister Catherine Colonna said at a news conference.

The participating countries, mostly from the West, also included a number of Asian nations, which French President Emmanuel Macron said provided "tangible proof that Ukraine is not alone."

Macron has faced criticism for his efforts at diplomatic outreach to Putin, which have yielded little and failed to prevent Russia's invasion in February. Most recently, Macron was criticized for saying that at the end of the war, Russia should be given security guarantees.

Speaking in Paris on Tuesday, Macron reiterated prior assurances that he and other Western nations would not pressure Ukraine into any peace deal or surrender of territory. "It is up to Ukraine, a victim of this aggression, to decide on the conditions for a just and lasting peace," Macron said.