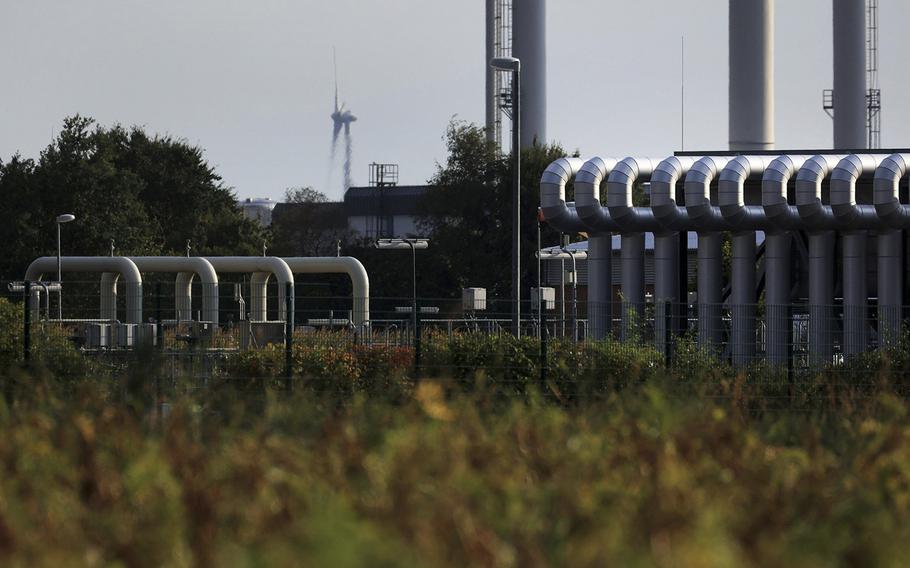 The natural gas storage facility operated by Astora GmbH & Co, one of the largest in Western Europe and formerly controlled by Gazprom Germania, in Rehden, Germany, on Tuesday, Aug. 23, 2022. (Krisztian Bocsi/Bloomberg)

Europe got hit by roughly $1 trillion from surging energy costs in the fallout of Russia’s war in Ukraine, and the deepest crisis in decades is only getting started.

After this winter, the region will have to refill gas reserves with little to no deliveries from Russia, intensifying competition for tankers of the fuel. Even with more facilities to import liquefied natural gas coming online, the market is expected to remain tight until 2026, when additional production capacity from the U.S. to Qatar becomes available. That means no respite from high prices.

While governments were able to help companies and consumers absorb much of the blow with more than $700 billion in aid, according to the Brussels-based think tank Bruegel, a state of emergency could last for years. With interest rates rising and economies likely already in recession, the support that cushioned the blow for millions of households and businesses is looking increasingly unaffordable.

“Once you add everything up — bailouts, subsidies — it is a ridiculously large amount of money,” said Martin Devenish, a director at consultancy S-RM. “It’s going to be a lot harder for governments to manage this crisis next year.”

Government fiscal capacity is already stretched. About half of European Union member states have debt exceeding the bloc’s limit of 60% of gross domestic product.

The roughly $1 trillion, calculated by Bloomberg from market data, is a broad tally of more expensive energy for consumers and companies — some but not all of which was offset with aid packages. Bruegel has a similar estimate looking at demand and an increase in prices, which was published in a report this month by the International Monetary Fund.

A rush to fill storage last summer, despite near-record prices, has eased the supply squeeze for now, but freezing weather is giving Europe’s energy system its first real test this winter. Last week, Germany’s network regulator warned that not enough gas is being saved and two of five indicators, including consumption levels, have become critical.

With supply tight, businesses and consumers have been asked to reduce usage. The E.U. managed to curb gas demand by 50 billion cubic meters this year, but the region still faces a potential gap of 27 billion cubic meters in 2023, according to the International Energy Agency. That assumes Russian supplies drop to zero and Chinese LNG imports return to 2021 levels.

“Getting gas is an absolute necessity and we will likely see widespread European hoarding,” said Bjarne Schieldrop, chief commodities analyst at Swedish bank SEB AB, predicting a “seller’s market” for at least the next 12 months . “The race is on to fill E.U. natural gas inventories” before next winter.

The main source of pipeline gas from Russia to Western Europe was Nord Stream, which was damaged in an act of sabotage in September. The region is still receiving a small amount of Russian supplies through Ukraine, but heavy shelling of energy infrastructure by the Kremlin puts the route at risk. Without this gas line, refilling storage will be challenging.

To head off a shortage, the European Commission has set minimum targets for inventories. By Feb. 1, reservoirs should be at least 45% full to avoid depletion by the end of the heating season. If the winter is mild, the goal is to leave storage levels at 55% by then.

LNG imports into Europe are at record levels and new floating terminals are opening in Germany to receive the fuel. Government-backed buying has helped Europe attract cargoes away from China, but colder weather in Asia and a potentially strong economic recovery after Beijing eased Covid restrictions could make that more difficult.

Chinese gas imports are likely to be 7% higher in 2023 than this year, according to China National Offshore Oil Corp.’s Energy Economics Institute. The state-owned company has started securing LNG supplies for next year, putting it in direct competition with Europe for spare shipments. China’s historic drop in demand this year was equivalent to about 5% of global supply.

China isn’t Europe’s only problem. Other Asian countries are moving to procure more gas. Japan, the world’s top LNG importer this year, is even considering setting up a strategic reserve, with the government also looking to subsidize purchases.

European gas futures have averaged about €135 a megawatt-hour this year after peaking at €345 in July. If prices go back up to €210, import costs could reach 5% of GDP, according to Jamie Rush, chief European economist at Bloomberg Economics. That could tip the shallow recession being forecast into a deep downturn, and governments will likely have to scale back programs in response.

“The nature of the support will change from an urgent, all-encompassing approach to more targeted measures,” said Piet Christiansen, chief strategist at Danske Bank A/S. “The numbers will be smaller — but it will still be there through this transition.”

For the likes of Germany, which rely on affordable energy to make products from cars to chemicals, high costs mean losing competitiveness to the U.S. and China. That puts pressure on Chancellor Olaf Scholz’s administration to maintain support for the economy.

“Given the potentially enormous political and social repercussions of the energy price explosion and the shock to the backbone of the German economy, it is important for the German government to step in,” said Isabella Weber, an economist at the University of Massachusetts Amherst, who’s known as the inventor of Germany’s gas price break.

The challenge is finding the balance between keeping factories running and homes heated in the near term while not choking off the incentives to invest in renewable power — widely seen as the most sustainable way out of the energy squeeze.

“The biggest task out of the crisis is to make the energy transition happen,” said Veronika Grimm, an economic adviser to the German government. “We have to massively expand renewables.”