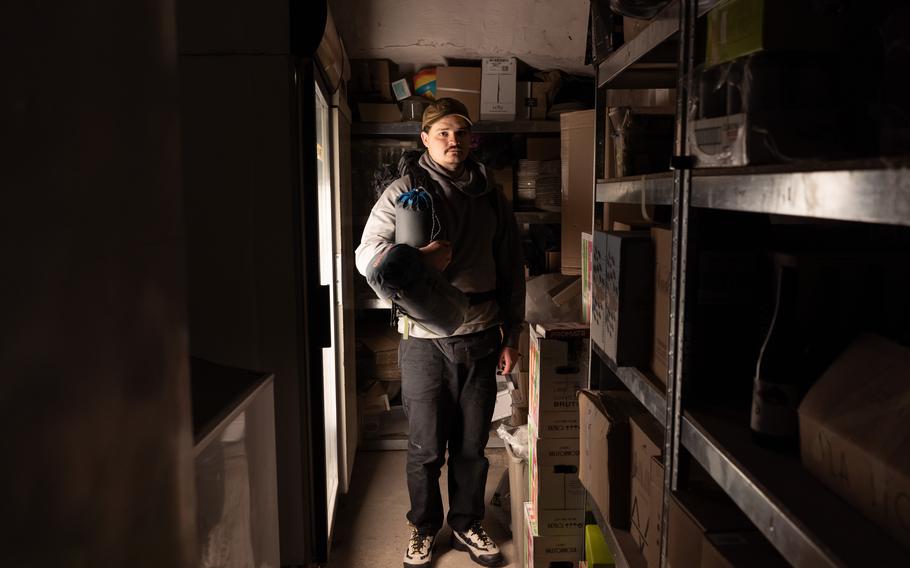 Cafe-bar owner Pavlo Huk hopes to accommodate staff and customers in the building’s basement in case of a nuclear strike. (Anastasia Vlasova/For The Washington Post)

KYIV, Ukraine — If Kyiv is struck by a nuclear bomb, Serhiy Dmytruk’s biggest fear is that he will survive the blast but die anyway from hunger, thirst or cold. So he has assembled what he calls his “nuclear backpack,” crammed with enough provisions and survival paraphernalia to sustain him for a week.

Pavlo Huk, who has compiled a similar pack, is kitting out the basements of his home and his workplace, and has rented a house in the countryside, planning to equip it with a generator, food and fuel. His worry is that friends and relatives who have shrugged off the threat will die because they have not taken similar precautions.

Natalia Sulima fears only that she will be separated from her 5-year-old son Misha, and she has been drilling him on the importance of following adults to a shelter whenever sirens sound. She won’t let him out without his own version of a nuclear backpack, a school bag containing a Transformers toy, snacks, and his favorite book: “The Boy Who Lives With Dragons.”

“I can’t believe we have to do this. In the 21st century,” Sulima said.

To varying degrees, residents of Kyiv are contemplating the once unthinkable possibility that their city could be targeted by a nuclear bomb. Ominous references by Russian President Vladimir Putin that he is prepared to use “all necessary means” to win in Ukraine and frequent chatter on Russian TV talk shows advocating the use of nuclear weapons have given grounds for the concerns. Natalia Sulima has prepared a survival backpack for her son, with snacks, toys, and his favorite book. (Anastasia Vlasova/For The Washington Post)

Military experts assess the risk of a nuclear strike as small, and Pentagon officials have said they see no evidence Russia is making preparations to carry one out. The threat may have receded further after Putin told Russian journalists on Wednesday that Russia had not “gone mad” on the issue of nuclear weapons and was aware of the serious implications of their use.

“We have these means, they are in a more advanced and modern form than those of any other nuclear country, this is obvious,” Putin said, without ruling out that Russia would use a nuclear device. “But we are not going to brandish these weapons like a razor, running around the world.”

However, for many residents of Kyiv, the capital of the country Russia set out to conquer, the risks are sufficient to warrant at least some contingency plans. Most Ukrainians were unconvinced that Russia would invade, despite frequent warnings from the United States, Dmytruk said, and were stunned when the war broke out.

“Now everyone believes there won’t be a nuclear war,” he said. “But if Russia wants to do it, Russia will do it.” He added: “It’s good to be prepared.”

Kyiv already has a network of nuclear-ready shelters in the form of its subway system, which was constructed by the Soviets during the Cold War to double as nuclear bunkers — including the world’s deepest station, Arsenalna, 346 feet below ground.

The province is preparing an additional 425 shelters to serve those living outside the city, equipping them with food, water and radio equipment, said Kyiv’s regional governor, Oleksiy Kuleba, 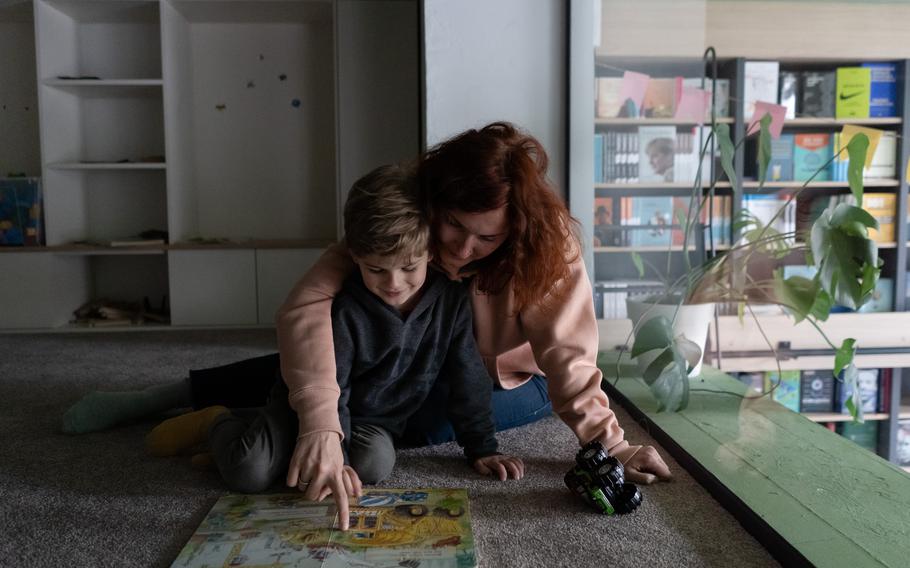 Natalia Sulima with her son Misha in Kyiv. (Anastasia Vlasova/For The Washington Post)

But the shelters won’t have room for everyone, Kuleba acknowledged, and they will close their doors five minutes before any anticipated blast to protect those inside from the radiation fallout.

For everyone else, the government has issued detailed advice on steps to be taken to survive:

If caught on the street, “under no circumstances” should you look at the explosion, which could cause blindness. Lie on the ground, face down, with your feet in the direction of the explosion. Cover all of the exposed parts of your body; wait for the blast wave to pass; take note of which way the wind is blowing. Then, move in a direction perpendicular to the direction of the wind to find some form of indoor shelter, preferably an inside room.

Before entering the room, remove your outer clothes and deposit them in a plastic bag. Once inside, seal doors and any windows with duct tape. Bring a radio and tune in for advice on when it is safe to come out, because mobile networks are unlikely to work.

The advice is complicated, and even if followed, the odds of survival are not high, said Yuliya Balashevka, who heads the Emergency Preparedness and Radiation Monitoring Department of the State Scientific and Technical Center for Nuclear and Radiation Safety in Kyiv.

And without knowing the size of the nuclear device that might be used or the location where it might hit, it is hard to know what preparations to make, Balashevka said.

Russia’s smallest tactical nuclear device dropped on the center of Kyiv would leave large swaths of the city unaffected. A larger device would have a far more devastating impact. 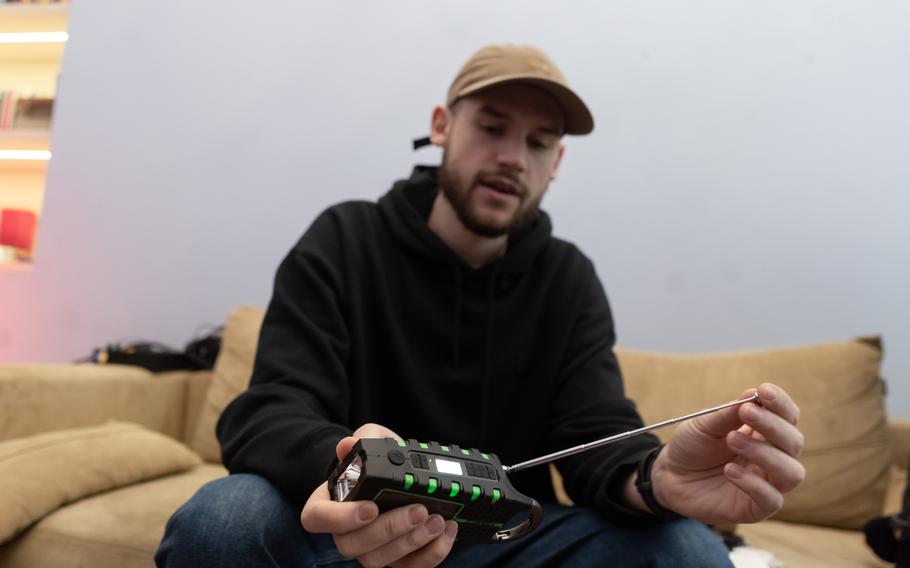 Either way, there is hope, Balashevka said. Even with a bigger bomb, there would be a gap of between 5 and 15 minutes between the shock wave and the fallout, allowing time for survivors of the initial blast to take cover. “You’re not hopeless. You’re not facing immediate death,” she said.

That is what Dmytruk is counting on with the preparations he has made. He assumes he will have up to an hour to get home, grab his backpack and sprint to the nearest subway station over half a mile away.

He has packed enough dried food and water to last a week, along with thermal underwear, a gas cooker, a sleeping bag, iodine pills, an elaborate device that includes a flashlight, an FM radio, and a windup charger. There’s also a compass to help figure out the wind direction and a two-way radio to stay in touch with similarly prepared friends.

Not all Kyiv citizens are taking the threat so seriously.

Sulima and her husband are hoping they will have time to escape to a house in the countryside they recently rented. They keep a stash of survival gear in the trunk of their car, and plan to bring it into their apartment if there isn’t time to flee. “I feel I’ve done everything I can to be prepared,” she said.