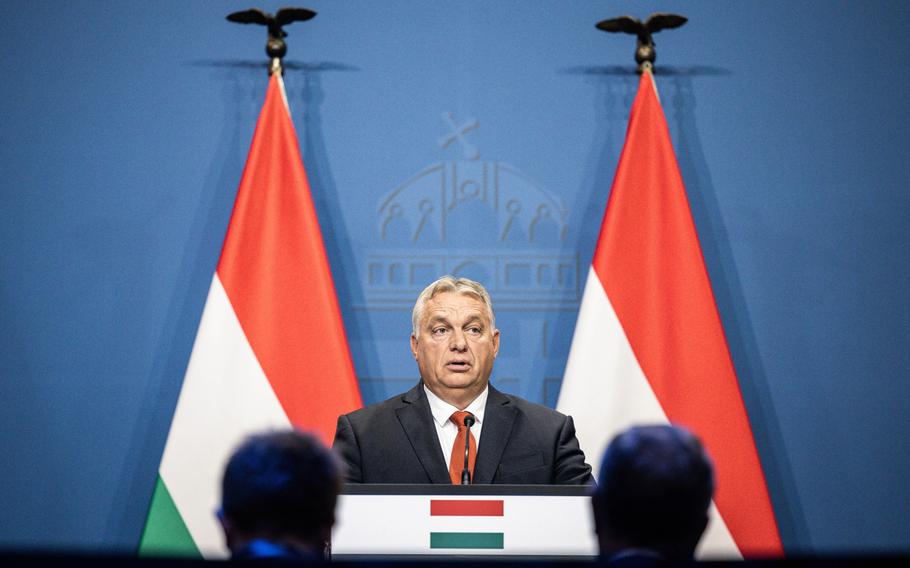 The European Union's standoff with Hungary deepened as a dispute over the fate of $14 billion of funding for Budapest scuppered attempts to push through crucial aid for Ukraine and a global minimum corporate tax.

Hungarian Finance Minister Mihaly Varga said at a meeting with EU counterparts in Brussels on Tuesday that his country would veto the €18 billion ($18.9 billion) support package for Kyiv.

Ministers dropped the adoption of Hungary's €5.8 billion COVID-recovery plan from their agenda in response. Budapest stands to lose €4.1 billion of that pot for good if it isn't approved by the end of the year. EU ministers may reconvene as soon as next week, according to a diplomat.

"Hungary is responsible for us not being able to show our financial solidarity with Ukraine," German Finance Minister Christian Lindner told reporters. "It is a war where our European values and interests are being defended. Ukraine must not lose this war and therefore needs our financial support."

In addition to his opposition to Ukraine aid and the global tax, Hungarian Prime Minister Viktor Orban has dragged his feet over NATO's enlargement to include Finland and Sweden, triggering criticism that he's attempting to blackmail peers in exchange for EU funds, a charge he's denied.

The EU is attempting to bring an end to suspected widespread graft in Hungary and the erosion of the rule of law under more than a decade of uninterrupted rule by Orban without letting the five-term Hungarian premier hijack the bloc's agenda.

The European Commission said last week that member states should freeze €7.5 billion of regular budget funds until Hungary enacts a set of reforms. It also suggested conditionally approving the COVID-recovery plan but delaying disbursements until further rule-of-law targets are met.

The recommendation was a blow to Orban after he undertook to meet a range of EU demands to reduce graft, passing more than a dozen pieces of legislation in the past two months.

In a potential way out, member states on Tuesday pushed back a final decision on the funding freeze and called for the EU's executive arm to provide an updated assessment on Hungarian reforms related to the rule of law in the coming days.

"There have been developments in Hungarian politics since the commission presented its report, so it makes sense to review these new developments," Lindner said. He cautioned that these shouldn't keep being examined "until the right result is found" but rather to see if "something has changed substantially."

A commission official declined to comment while the meeting of EU finance ministers was ongoing.

EU ambassadors are due to discuss the new assessment by Dec. 12, an EU diplomat said. If there's agreement among member states, it could be signed off formally by a previously planned gathering of foreign ministers or any other council of ministers who happen to be meeting. If there's no consensus, the bloc could call another extraordinary meeting of finance ministers, the diplomat said.

Countries led by Germany and including France said they needed more time to assess Hungary's COVID-recovery plan and its progress on meeting rule-of-law demands, according to people familiar with the matter.

All sides are now working against the clock, with Ukraine badly in need of the EU funding as it tries to keep its economy going while it defends itself against invading Russian forces. Lindner said remaining member states excluding Hungary must decide as quickly as possible on how to use already agreed money.

The commission and national experts said they will look at options to release some funds to Kyiv in January after the bloc was forced to postpone the release of €3 billion promised last May over internal disagreements about how to design the funding. The commission may need to rely on national guarantees again to provide the loans, an EU official said, an option that proved problematic over the past months.

For Hungary, too, time is of the essence as it's the only country of the 27 EU member states whose COVID-recovery plan is yet to be signed off, while the final deadline for a decision on its €7.5 billion of funds is Dec. 19.