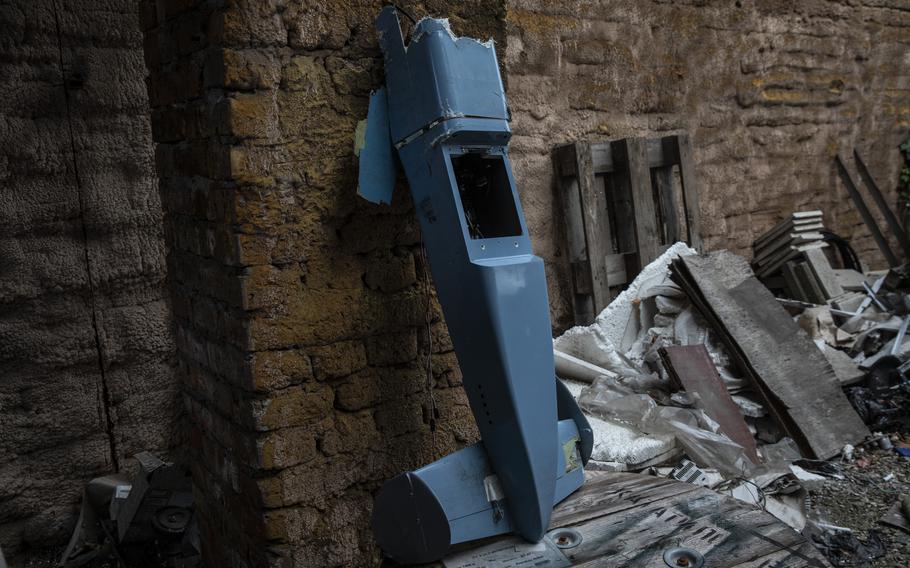 Fragments of two Shahed drones at a secret workshop in the Mykolaiv region. The wreckage included pieces that appeared to have been manufactured in the United States, Asia and Europe, despite sanctions limiting Iran's access to such technology. (Heidi Levine/The Washington Post)

MYKOLAIV, Ukraine — The pickup truck bounced along a rutted dirt track until it came to a stop on a sandy knoll. It was almost midnight. A half-moon revealed waves lapping at a small beach as four Ukrainian soldiers — drone hunters — stepped out of the truck and waited for the sound.

Boom. A powerful explosion echoed over the city of Mykolaiv — signaling another Russian air attack was underway. Then came another rumble and sirens blared.

“To battle,” said the unit commander, aiming a thermal vision sensor into the early November sky as another soldier climbed behind a heavy, truck-mounted machine gun.

While Russia has retreated on the ground, it has continued to strike Ukraine with Iranian-made Shahed drones, terrifying civilians and repeatedly knocking out water, power and heat as winter sets in.

The unit on the beach was one of dozens now tasked with detecting and destroying the self-detonating unmanned aerial vehicles Russia is using in its bombing campaign.

Mykolaiv, which until recently was just 20 miles from the front, was one of the first cities targeted with Shaheds, and the city quickly cobbled together mobile anti-drone units drawing personnel from the police, army, territorial defense units and national guard.

Russia initially deployed the Shaheds at all hours, the drone hunters said. But the noisy, slow-moving machines were easily shot down in daylight, so they now fly mostly between midnight and dawn.

Anti-drone units rotate night shifts across the city, moving between firing points - each carefully chosen to minimize the chance of accidentally injuring a civilian. When they spot a Shahed, multiple teams often fire at the drone at once.

“It’s a beautiful picture when in the middle of the night, a thousand rounds light up the sky,” said Bogdan Yarema, 26, a member of Ukraine’s Special Forces helping coordinate Mykolaiv’s anti-drone efforts.

“It’s like something out of Star Wars,” both “awesome” and dangerous, said Yarema, who was an event art director before Russia’s invasion. “That’s why we shoot only where we know there are no civilians in the sector because you can kill more civilians with your guns than the drones would.” 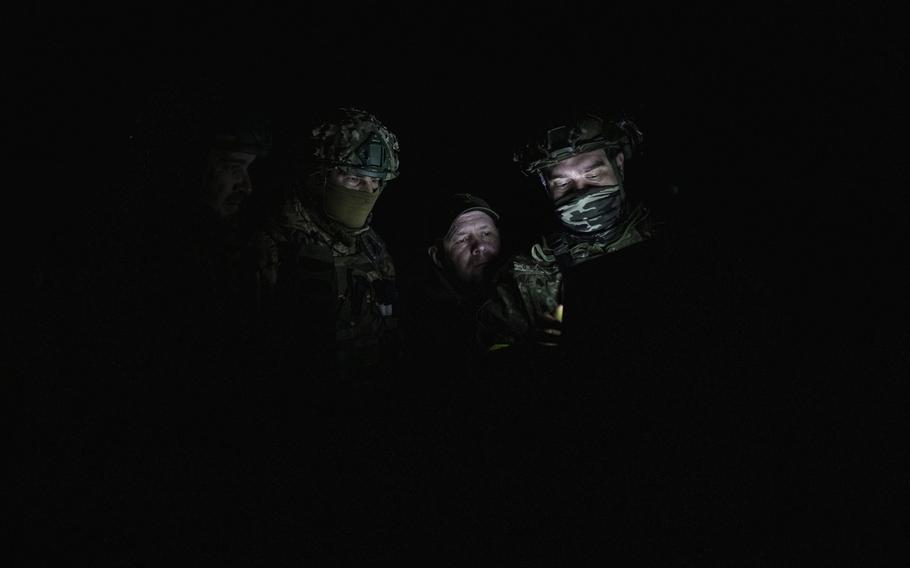 Andriy Tsybin, 24, a police sergeant, said most anti-drone units had roughly a half-dozen members. Some also have heavy weaponry. Tsybin’s team, for instance, was armed with a 50-caliber machine gun salvaged from a destroyed Russian tank. The gun was now perched in the back of a donated convertible, complete with a custom paint job showing a skull.

One unit member normally uses a gunlike thermal sensor to spot the Shahed, before switching on a laser beam to illuminate it so others can shoot it down.

Like their equipment, the drone hunters are an assorted bunch. Some, like Tsybin, were working as police officers or soldiers before Russia’s invasion. Others quickly signed up, including a pig farmer who uses his grandfather’s World War II flare gun to illuminate the drones.

K, who led the anti-drone unit positioned on the beach and spoke on the condition that The Washington Post use only his first initial for fear of being targeted by Russia, had been a television journalist until 2017, when he started a military equipment company.

Now, his life revolves around drones — operating them for the Ukrainian military and destroying those of the enemy. “My wife said she thought she married a journalist,” he said with a laugh. “Then I turned into a businessman and now some kind of fighter.”

At a meeting Monday, Ukraine’s senior military and political leaders discussed efforts to repair infrastructure systems and protect them from further Russian airstrikes. The Kremlin, meanwhile, denied reports that it might abandon the Zaporizhzhia nuclear power plant.

When Russia first started using Shaheds, the Ukrainians were not sure how to destroy them. Some soldiers used shoulder-launched missiles. The Air Force even scrambled fighter jets.

But risking multimillion-dollar planes on $20,000 drones was “completely wasteful,” said Paul Lushenko, a U.S. Army lieutenant colonel and doctoral student at Cornell University who studies drone warfare. The old-school approach of shooting them down with machine guns was a better solution, at least until more advanced Western air defense systems that have begun to arrive in Ukraine are fully operational, he said.

Most of the Shaheds soaring over Mykolaiv are launched from Crimea, according to Yarema and others working to shoot them down.

The drones typically approach from the Black Sea, before coming up the Southern Buh river. While some are aimed at military targets or infrastructure in Mykolaiv, others are headed to cities as far as Kyiv, 300 miles north, or Lviv, 500 miles away in western Ukraine.

Sometimes, a single Shahed will suddenly appear on the city’s radar systems. Other times, Russia will send half a dozen at once. Occasionally, Russia also fires missiles that can inflict their own damage and mask the approach of a drone.

“They are trying to figure out where we have radar and where we don’t,” Yarema said.

The drones are powered by small engines like on a motorcycle, and make a similar noise. When Mykolaiv residents hear them, they make reports via the Telegram app.

The drone hunters use tablets showing the location of approaching Shaheds. Alerts give them roughly 10 minutes to get into position.

Once a drone is illuminated, the barrages that follow can be so intense it is often hard to know which unit destroyed a drone. “Of course, there is competitiveness,” said K, noting his team had shot down three Shaheds as of early November. “But ultimately the Ukrainian state killed it. The result is the most important.”

After a drone is destroyed, the units hunt down the pieces for public safety and intelligence reasons.

In a secret workshop, K showed fragments of two Shaheds, including parts that appeared to be made in the United States, Asia and Europe, despite sanctions limiting Iran’s access to such technology.

“They are sidestepping sanctions,” K said.

The drone attacks have quieted in the past two weeks as Russia’s supply of Shaheds has run out, according to a British Defense Intelligence update on Wednesday. But Iran reportedly plans to send more to Moscow, and there is an agreement to begin manufacturing drones on Russian soil, according to new intelligence seen by U.S. and other Western security agencies.

Repeated drone and missile attacks on Ukrainian cities have spurred the United States and its allies to start supplying Ukraine with more advanced air defense systems. But until they are deployed across Ukraine, the protection of many cities, including Mykolaiv, will largely hinge on the drone hunters.

The drone hunters are especially wary of where a damaged drone might fall.

In Kyiv, some Shaheds were shot down but then landed on apartment buildings, killing civilians. Dmytro Pletenchuk, a press officer for the Mykolaiv regional military administration, said no one in Mykolaiv had been killed or injured from anti-drone operations.

Ukraine is now a testing ground for a new type of terror that is inexpensive and easy to transfer across borders, Yarema said, adding that it was only a matter of time until other countries faced similar threats. “We are working on how to fight these drones, but we need more stuff,” Yarema said. “Then we can share our experiences, because the next batch of drones Iran might use against someone else.”