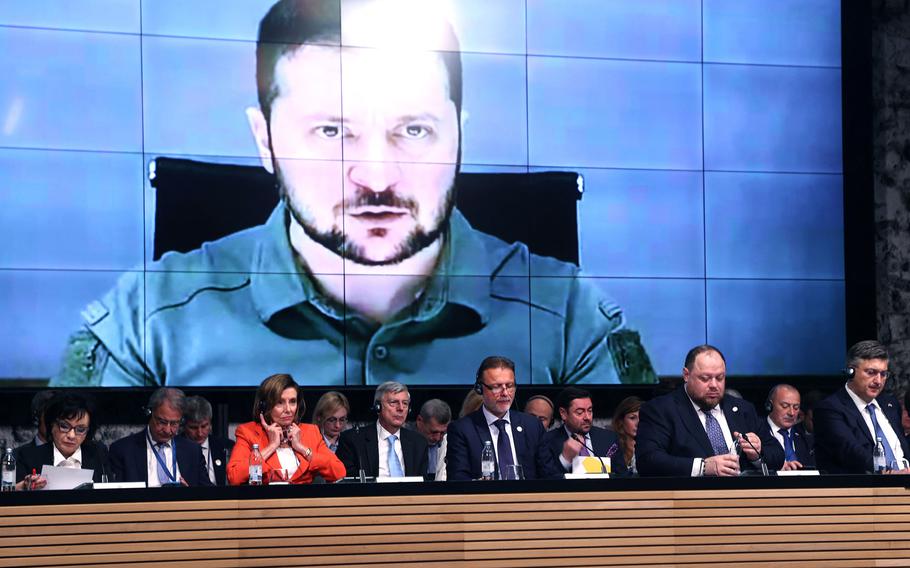 Ukraine President Volodymyr Zelenskyy appears on screens as he speaks via a video link at the opening session of the International Crimea Platform Parliamentary summit, organized by Ukraine and Croatia, in Zagreb, on Oct. 25, 2022. (Damir Sencar, pool, AFP via Getty Images/TNS)

ODESA, Ukraine (Tribune News Service) — Beneath a chill, low-lying fog, the Black Sea has gone winter-gray. The craggy coast of Crimea, illegally seized from Ukraine by Russia nearly nine years ago, lies far from this southern stretch of seashore — yet, to many here, the strategic peninsula suddenly seems tantalizingly close.

Ukraine’s recapture this month of Kherson, a provincial capital to the north of Crimea, has revived longtime hopes of somehow regaining control of the Massachusetts-sized peninsula, which the government in Kyiv — and most of the world — still considers part of Ukraine.

Long-range weaponry that Ukraine does not possess would be crucial to such an effort, and Moscow has tried to make clear that attacks on its forces in Crimea, including the key warm-water port of Sevastopol, amount to crossing an explosive tripwire. Even so, the fate of the peninsula, home to 2.4 million people, is increasingly part of the wartime discourse.

Even prior to Russia’s full-scale invasion of Ukraine, which is about to enter a 10th grinding month, Crimea — a coveted prize for centuries, changing hands again and again — has been a lodestar for both sides in this war.

Russian President Vladimir Putin often harks back to the peninsula’s imperial history, painting it as an integral part of Russkiy mir — the Russian world. That construct, supposedly based on shared Slavic culture, is in turn presented by the Kremlin as an overarching pretext for trying to subdue all Ukraine, a onetime Soviet republic that has been a sovereign nation for more than three decades.

As the war drags on, Ukrainians have scant patience for Russian nostalgia over symbols of empire.

They shrugged when Moscow-backed officials in then-occupied Kherson made off with the bones of the 18th century princely Russian general Grigory Potemkin — revered by Russians for his role in annexing Crimea from Ottoman Turks in 1783. In Odesa, a statue of Potemkin’s lover, Empress Catherine II, is boarded over and set for removal.

In a sense, Crimea is at the heart of the current conflict. Many here argue that a less-than-resolute world reaction to Russia’s seizure of the peninsula in 2014 helped set the stage for Putin’s invasion this year. Western nations, including the United States, imposed sanctions and denounced Crimea’s annexation at the time but ruled out a military response.

Now, Ukraine President Volodymyr Zelenskyy has added the return of Crimea to his list of war goals, along with driving Russian forces back to pre-February positions and regaining control of the other four mainland provinces sham-annexed by Putin in late September.

The Russian leader has already shown his fury over challenges to Moscow’s dominion over Crimea, particularly last month’s spectacular attack on the Kerch Bridge to the Russian mainland, a 12-mile span that Putin personally inaugurated in 2018.

Ukraine has not formally claimed responsibility for the massive Oct. 8 explosion that damaged the bridge’s roadway and rail line, but days later, Russian forces embarked on a campaign to destroy Ukraine’s civilian power infrastructure, employing language that hinted at payback. The biggest missile barrages of the war have lately targeted Kyiv and other cities, plunging millions into cold and darkness.

With some 40% of the nation’s electric grid knocked offline, Ukrainian authorities have begun helping people in recently liberated parts of the country’s south — where retreating Russian troops wrecked energy facilities — depart voluntarily to avoid further straining the faltering power supply. Last month, the municipal government in Kyiv raised the drastic possibility of evacuating the capital if the city’s electrical capability were to break down completely.

Ukraine notched a series of important victories on the autumn battlefield — Kherson’s recapture, and prior to that, the rout of Russian forces from a huge swath of Kharkiv province, in the northeast — and some senior Ukrainian political security figures are publicly bullish on the idea that Kyiv can militarily win back Crimea. So are some Western experts, including Ben Hodges, former commander of U.S. forces in Europe, while other analysts are more measured in their views.

Ukraine is already using newly recaptured areas in the south as a staging ground to harry Russian troops. Oleksiy Hromov, deputy chief of the army’s main operational directorate, said during a briefing last week that Ukrainian forces were “doing everything possible to strike at the enemy with the maximum range of our weapons” — which now includes areas close to the peninsula.

While Crimea itself lies out of range of Ukrainian rockets and artillery, essential Russian supply routes — the “land bridge” established when Moscow’s forces seized the southern cities of Mariupol and Melitopol earlier in the war — are newly vulnerable. The peninsula’s canal-borne water supply is also threatened.

Russian military installations on the peninsula have come under occasional stealth attacks in the course of the war, carried out either by drone or by suspected Ukrainian saboteurs. In September, Ukraine claimed responsibility for a strike a month earlier on a Russian air base that destroyed at least nine aircraft and sent plumes of thick black smoke into the air, in full view of Russian vacationers who favor Crimean beaches — or did, at least.

Other serious setbacks for Russia have taken place in the waters off Crimea. Back in April, in one of the war’s most eye-catching military feats, Ukraine sank the flagship of Russia’s Black Sea fleet, the Moskva, with shore-to-ship missiles. And Russian forces in late June were forced to abandon Snake Island, a dot of territory 22 miles off Ukraine’s Black Sea coast, after coming under repeated Ukrainian attacks.

Putin-watchers say that the heightened, bordering-on-mystical language the Russian leader uses to characterize Moscow’s attachment to Crimea fuels rage — and calls for vengeance — whenever Russia suffers a setback there.

Samuel Ramani, an associate fellow at Britain’s Royal United Services Institute, wrote on Twitter over the weekend that potential peril to Crimea “is alarming even the most hardline voices” inside Russia. He cited warnings by an influential lawmaker, Andrei Gurulyov, who declared that Moscow must guard against a perfidious joint Ukrainian-NATO attack on the peninsula.

Zelenskyy’s government, meanwhile, reminds citizens in ways large and small that Ukraine has never stopped considering Crimea its own.

Virtually every day, a mobile app used by millions lights up with warnings of Russian missile strikes in various parts of the country. When the alert is nationwide, the peninsula is deemed “the only part of Ukraine” not under threat.

Ukraine’s intelligence chief Kyrylo Budanov, who grew up in Crimea, told the news outlet Ukrainska Pravda last month that the peninsula’s recapture could come as early as next year.

“We are going to come back there quite soon,” he said. “Yes, with weapons.”