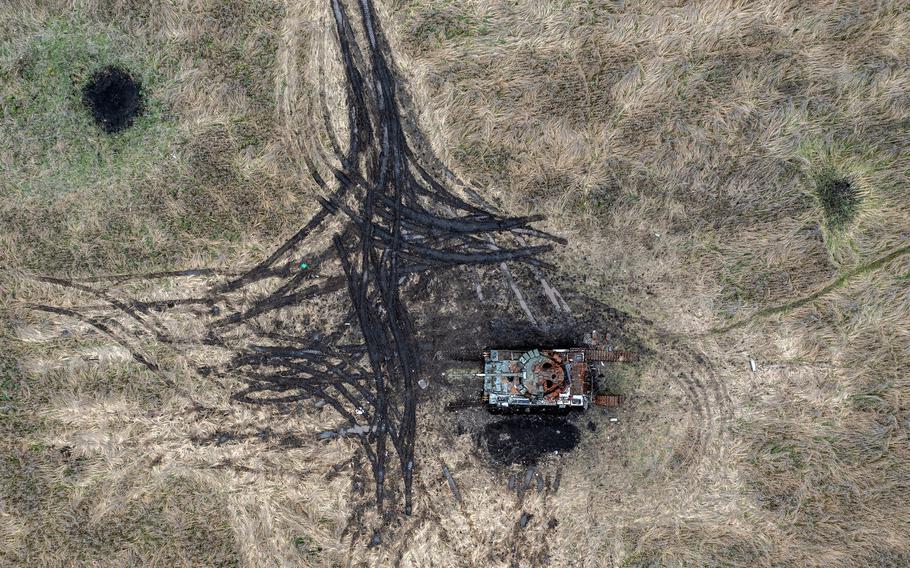 Artillery and mortar craters pierce the ground next to a destroyed Russian tank, on Oct. 23, 2022, in Kam’yanka, Kharkiv oblast, Ukraine. Ukraine’s president Volodymyr Zelenskyy has accused Russia of launching a massive attack on his country’s energy grid causing around 1.5 million households to be left without electricity. (Carl Court, Getty Images/TNS)

(Tribune News Service) — Ukraine’s allies are increasingly concerned that desperation in the Kremlin over an unrelenting string of battlefield failures may lead Russia to escalate its war, possibly using a massive attack on a target like a dam or even a weapon of mass destruction.

For the moment, there’s no sign Moscow is actually making preparations for such a strike, even as it ratchets up the rhetoric, according to officials from North Atlantic Treaty Organization countries who spoke on condition of anonymity to discuss sensitive intelligence. U.S. and European defense ministers rejected allegations from Russian counterpart Sergei Shoigu in a rare round robin of phone calls Sunday alleging Kyiv is preparing to use a “dirty bomb.”

Instead, the view among Ukraine’s allies is that the Kremlin is trying to scare them with the talk of such “unthinkable” weapons — along with strikes on the country’s civilian power grid — into reducing their supplies of weapons and other support for Kyiv. So far, the intimidation campaign hasn’t worked.

As Vladimir Putin’s war enters its ninth month with his troops steadily losing ground — land the Russian president last month claimed to annex as Russian territory and vowed to defend with all available means — the Kremlin has few options for turning things around quickly. The 300,000 reservists Putin called up will need weeks or months to train and inventories of the missiles Russia has lately been using to target Ukraine’s civilian infrastructure are running short, western officials said.

“It is Russia trying to dissuade the West from further helping Ukraine but it really is a sign of desperation,” said Samantha de Bendern, an associate fellow at the Royal Institute of International Affairs, pointing to Russia’s losses on the battlefield along with its dwindling supply of weapons.

“They can't produce weapons fast enough to keep up with what the west is giving Ukraine, so this is a message to the West: stop messing in Ukraine otherwise things will get really bad.”

The U.K., U.S. and France have dismissed Shoigu’s claims that Kyiv plans to use a “dirty bomb,” which could combine conventional explosives and radioactive material on its own territory, as “a pretext for escalation” and vowed a harsh response.

Privately, Kyiv’s allies are war-gaming how they might react, though officials have been tight-lipped about the possibilities they’re considering for fear of appearing to lock themselves into particular actions. They are also planning on how to keep up weapons supplies, humanitarian relief and gathering evidence of war crimes in the event of a massive attack.

While Russia’s public threats it might use tactical nuclear weapons have raised fears, officials from NATO states said they haven’t seen any of the telltale preparations that would normally precede that. Western officials said after the Shoigu calls they still believed the likelihood of any use of nuclear weapons was limited. Russia has regularly made unfounded allegations about Ukraine’s alleged plans for escalation.

The Kremlin still has a range of options for escalation short of nuclear arms that it’s likely to turn to first, one of the people said. Among those may be an attack on the Kakhovka hydroelectric dam, which would cause massive flooding downstream and potentially threaten cooling-water supplies for Ukraine’s nuclear power plant in Zaporizhzhia.

To date, the threats from Russia since Ukrainian forces began retaking large swathes of territory in August haven’t undermined support for Kyiv among its allies. But Ukraine still isn’t getting all the kinds of weapons it is asking for, with countries reluctant to deliver long-range missiles, as well as modern tanks, for fear of triggering more escalation.

Unable to turn back Ukraine’s advances on the front lines, Russia has targeted critical infrastructure in Ukraine in recent weeks in efforts to terrorize civilians and encourage a wave of refugees to Europe that might weaken support from allies, Ukrainian and European officials said.

Kyiv’s troops haven’t been able to replicate the early sweeping successes of the campaign, although they continue to advance. Some of that seeming slowness has been deliberate. Ukraine’s forces are moving cautiously near Kherson in the south, seeking to avoid a battle that destroys the city like the one that left Mariupol in ruins, Western officials said.

The onset of winter is also likely to complicate fighting in some areas, limiting visibility and mobility. Still, the advanced weapons, along with cold-weather gear, supplied by the U.S. and Europe may give Ukraine’s forces an advantage in the cold against Russia’s less-well-equipped army.

One official said he was confident Ukrainian forces could eventually take back Kherson and, if weapons continue to flow, make significant advances on all fronts by spring, though possibly at a high cost of casualties.

Heavy rains may also bring even more challenges over the winter months, but the Ukrainian side will slowly try to press ahead as they are now, Kyrylo Budanov, the head of Ukrainian military intelligence, said in an interview with Ukrainska Pravda.

With assistance from Marc Champion.