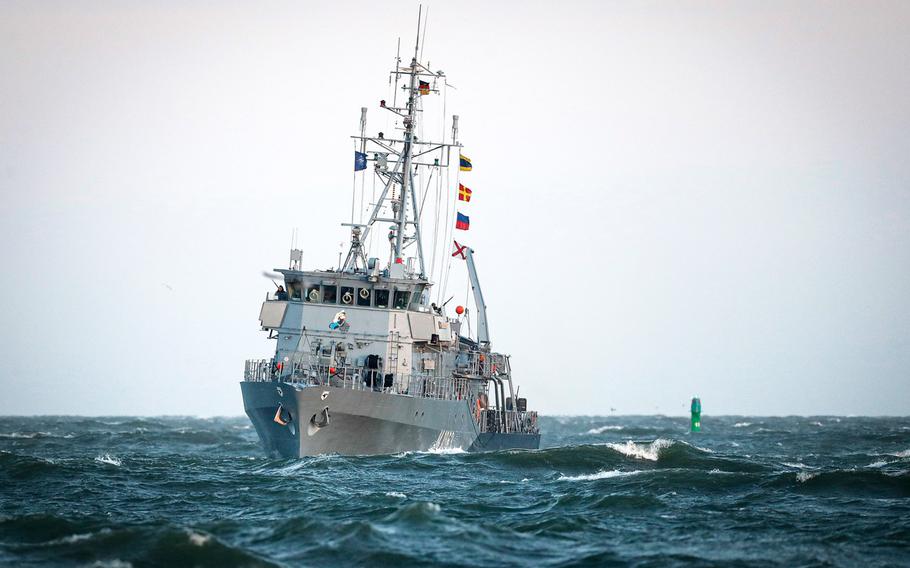 The minehunter Bad Bevensen, shown here in January, set sail for the German port of Lubmin on Oct. 24, 2022. The crew will search the Baltic seabed near the logistics port for old mines and war materiel before construction starts on a new liquefied natural gas terminal. (Nico Theska/German navy)

The construction project in Lubmin has gained urgency amid the Kremlin’s war against Ukraine and the fallout from underwater explosions that damaged the Nord Stream 1 and Nord Stream 2 pipelines. Germany scrapped plans for the latter as a result of Russia’s unprovoked invasion of Ukraine in February.

Extreme volatility has sent energy prices in Germany and other European countries that host a U.S. military presence to stratospheric heights, and many service members are dreading the heating bills that await them this winter as a result.

Construction of the LNG terminal in Lubmin represents a breakneck-paced effort to find new methods of supplying energy as the country seeks to shed its longtime dependence on Russian gas.

Some Western countries have called the recent pipeline attack an act of Russian sabotage. Moscow continues to deny any responsibility for the explosions.

Before the Lubmin LNG facilities are completed, mine countermeasures teams from the German navy will search the sea floor near the logistics harbor for old war materiel and unexploded World War II ordnance.

Using on-board sonar technology and cable-guided underwater drones, they will destroy mines with explosive charges. Combat divers can also clear old mines and bombs in difficult places, such as harbors or shallow waters, the German navy said in a statement Monday.

“Many thousands of tons of old ammunition” are still lying on the Baltic Sea floor in German waters, according to estimates by the ammunition expert group North and Baltic Sea of the German government.

Although officials did not specify size of the area to be searched, the mission is scheduled to take four days to complete, according to the statement.

Wartime munitions that are lying on the seabed and are covered by mud and debris can be hard to detect and remain underwater for decades, posing a danger to people and the environment.

The additional check for underwater dangers is to enable expansion and upgrades that will allow the industrial port to receive LNG deliveries from larger ships.

A floating storage facility off the coast will accept tankers that cannot reach Lubmin port because of their size and draft, the German navy said in a statement Monday.

Because of the relatively flat sea floor in the harbor, smaller ships will then transfer the liquid natural gas to a floating regasification platform, which in turn connects to Germany’s extensive onshore natural gas network.

According to the terminal operator Deutsche ReGas, the first ship deliveries should arrive at the terminal in December. Company plans estimate the facility could feed up to 4.5 billion cubic meters of natural gas into country each year.

Germany, which relies on natural gas for more than a quarter of its energy needs, is connected to LNG terminals in neighboring countries but does not currently have its own port to receive deliveries of the liquid gas directly.