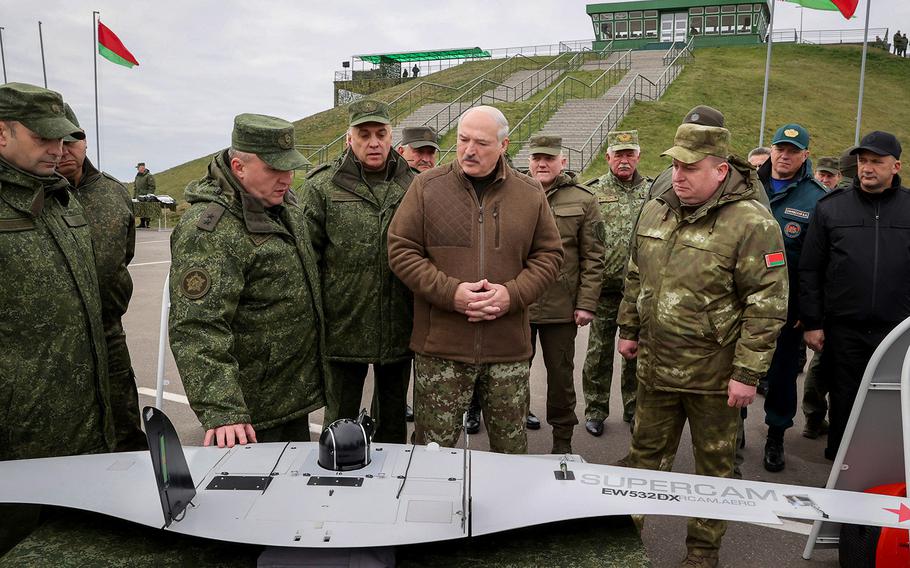 The president of Belarus insists he won't join Vladimir Putin's war in Ukraine even as thousands of Russian troops are pouring back into his country. It's a risk Ukraine can't ignore.

As many as 9,000 Russian servicemen and almost 170 battle tanks, 200 armored personnel carriers, artillery and aircraft are arriving in Belarus as part of a "joint force" that Putin and Belarusian President Alexander Lukashenko agreed to deploy in the nation bordering Ukraine to the north. They're due to carry out live fire and missile drills in eastern and central Belarus.

Lukashenko allowed Putin to use Belarus as a launchpad for his failed attempt to seize Ukraine's capital, Kyiv, at the start of his invasion in February. Analysts say their aim now may be to distract Ukrainian forces advancing in the country's east and south to retake territory that Putin claims to have annexed.

"We don't kill anyone, we don't send our troops anywhere," Lukashenko told a meeting with his military officials this month, claiming Belarus's support to Russia's war in Ukraine is limited to protecting and supplying its forces and treating the wounded.

With Putin's backing, Lukashenko crushed widespread protests following disputed 2020 elections that extended his then 26-year rule. He risks stirring fresh tensions if Belarusian forces enter Ukraine because neither the military nor the public wants to join Russia's war, according to exiled opposition leader Sviatlana Tsikhanouskaya.

"If for some reason there will be an order to invade, our soldiers will defect," Tsikhanouskaya said in an interview in Brussels. "They will change sides, they will hide, they will flee Belarus, but they won't fight."

While any move to join the war could weaken Lukashenko's ability to suppress dissent at home, there's no reason to believe the military would stage a coup against him, according to an Oct. 18 assessment by Latvia's intelligence service.

Russia and Belarus have a long history of military cooperation as part of a "Union State" agreement. Russia used massive joint exercises in Belarus in the weeks before Putin's invasion to amass forces on Ukraine's borders while repeatedly denying it planned to attack.

Eight months into his war, a Ukrainian counteroffensive has pushed Putin's forces out of the northeastern Kharkiv region and is pressing them to retreat around the southern city of Kherson. Ukraine is also advancing in Russian-occupied eastern territories of Donetsk and Luhansk.

Even after pulling its forces back from around Kyiv, Russia has continued to attack Ukraine with missiles and drones fired from Belarus, according to the Ukrainian military.

Russia amassed between 15,000 and 30,000 troops in Belarus before its assault on Kyiv and would need even more this time, according to Belarusian Hajun, a team of analysts monitoring military activities in Belarus using open-source data and thousands of witness accounts from across the country.

While such an operation would be "insanity," it can't be ruled out completely, said Anton Motolko, the group's founder. Still, it's more likely Russia is sending newly mobilized reservists to Belarus for training, which also forces Ukraine to tie up military resources on the border that could be deployed to other combat operations.

The U.S. is "keeping an eye on" developments in Belarus, though it sees no indications to "change our perspectives on the battlefield," a senior Pentagon official told reporters at a briefing Monday.

The joint fighting group assembled in Belarus is unlikely to be combat capable, according to a U.K. intelligence assessment seen by Bloomberg.

Belarusian independent media and opposition Telegram channels recently brimmed with reports of reservists being called to military recruitment offices, stirring fears of a secret mobilization. The Defense Ministry denied any such plans in a statement Wednesday, saying people were being summoned for "data checks" ordered by Lukashenko.

Ukraine is monitoring the more than 620 miles of its frontier with Belarus and any intervention by Russian troops or a joint force will face fierce resistance, Mykhailo Podolyak, an adviser to President Volodymyr Zelenskiy, said Wednesday.

"We see no immediate signs of an offensive being prepared," he said.