Iran’s drones are cheap, plentiful and helping Russia in Ukraine 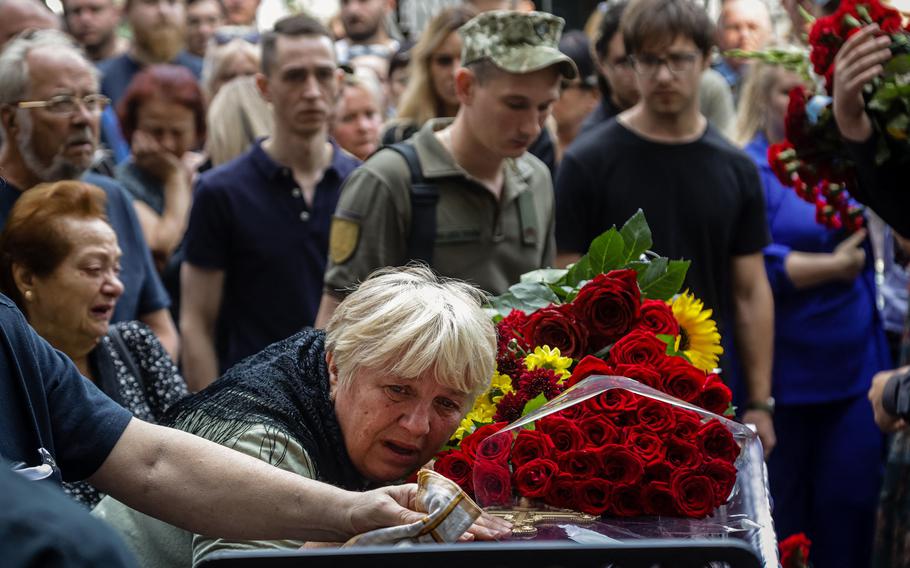 Family members mourn during a funeral, in the Black Sea port city of Odessa, in southern Ukraine on Sept. 2, 2022. (Oleksandr Gimanov/AFP/Getty Images/TNS)

(Tribune News Service) — After months of being hammered on Ukraine’s battlefields by U.S. kamikaze drones and longer range rocket systems, Russia is striking back with a new capability if its own, attacking the southern port city of Odesa almost daily with winged missiles from Iran.

That’s leading some Ukrainians to begin to flee Odesa again for the first time since before the summer. Russia has hit the port and the military’s Southern Command, both in the center of the city of 1 million, plus an ammunition depot and other targets outside the city.

The threat has hurt already struggling local businesses and created issues at the port, where crews and dockers feel unsafe loading ships with the Iranian Shahed-136 drones flying overhead, Mayor Gennadiy Trukhanov told Bloomberg in an interview. Russia is allowing ships in and out of Ukraine’s Black Sea ports under a limited grain export deal that, Trukhanov calculates, has seen 228 ships pass through Odesa to date.

Yet there’s another reason Ukrainian President Volodymyr Zelenskyy ejected Iran’s ambassador and in a meeting this week with his top commanders focused on the new threat: The drones are inexpensive, hard to shoot down and hitting logistics and command and control centers behind Ukrainian lines.

“These drones are quite slow, but they also carry a powerful charge, so a hit from them is equivalent from a hit from a missile,” said Serhiy Bratchuk, a spokesman for the Odesa region military administration. Even if it takes several drones in a group to achieve that, they are so much cheaper it doesn’t matter.

It can have a psychological impact on the population,” Bratchuk said, interviewed outside Odesa’s regional administration. “It’s an act of terrorism. They are just trying to find something new in their tactics.”

The use of the Iranian drones is drawing comparisons among some pro-Russian military bloggers to the HIMARS rocket systems the U.S. supplied to Ukraine. The HIMARS did much to disrupt Russia’s ability to bring artillery munitions to the front, changing the course of the war.

The new weapons also have been used at the front, with some Russian military bloggers publishing images of Ukrainian armored personnel carriers and artillery pieces they said were destroyed by the Shaheds, a scenario supported in a report by the Wall Street Journal.

On Tuesday, the Ukrainian Armed Forces Facebook page said a further three Shahed drones had been shot down in Odesa’s neighboring Mykolayiv region, bringing the number destroyed to date to 20.

“Just to cover Odessa,” said Legitimate, a pro-Russia military blogger with 718,000 subscribers, “you need air defense for billions of dollars, and hundreds of millions more for maintenance. There is no such money.”

There’s excitement on pro-Russia sites, too, that the drones could be used in swarms to destroy Ukrainian anti-aircraft batteries and give Russia the air superiority it has lacked throughout the war.

Those hopes are unlikely to be realized, according to Western military analysts. Yet for now the Iranian munitions present a new threat to Odesa, Trukhanov said.

“We will now find a way to combat the drones effectively,” Trukhanov said on Tuesday, shortly after another air raid siren forced him to interrupt an interview and move to the city’s hall’s bomb shelter — a basement movie theater.

The Ukrainian Air Force later identified the threat as having come from a Russian SU-25 jet, which it said was shot down. In the afternoon three drones, as yet unidentified, were also destroyed, the air force said. That information could not be independently verified.

Trukhanov pointed to the possibility of buying anti-drone systems from Israel, which has been dealing with Iranian loitering munitions for decades. Ukraine’s defense forces and technicians were also on the case, he said.

Russia took delivery of 1,000 drones from Iran at the end of August, according to the U.S. A Ukrainian defense official showed Bloomberg an image of drone fragments with the Shahed’s Russian Geran-2 marking, found after one of the strikes.

The Shahed-136 can be used in numbers, forcing Ukraine to defend against them with anti-aircraft missiles that can cost hundreds of thousands of dollars each. That doesn’t make the Shahed a super weapon that can change the war’s outcome, according to Justin Bronk, Senior Research Fellow for Airpower and Military Technology at the Royal United Services Institute, a London-based think tank.

In a twitter thread on the weapons, Bronk described the Shahed-136 as from a family of slow, low flying, propeller driven missiles that have been around since the 1980s and, in the Iranian case, have been upgraded primarily by the inclusion of commercial GPS systems available on Alibaba.

They should be vulnerable to electronic jamming and old fashioned anti-aircraft cannons, such as the mobile Gepard system, according to Bronk. Germany has given Ukraine at least 26 Gepards, with more budgeted. Israel has a near perfect record in shooting down even more sophisticated Iranian drones.

The difficulty, in a country larger than France, comes in deciding where to place limited stocks of air defenses. The Shahed can fly hundreds of kilometers (Iran claims in excess of 2,000 km. or 1,243 miles) and loiter for hours before locking onto a target. “Western partners should increase deliveries of short-and-medium-range air defenses to help,” Bronk wrote.

Trukhanov echoed that request and thanked Ukraine’s partners for the air defenses they already sent. For Odesa, though, the new threat has ended a months-long period of relative calm that saw roughly half of the 200,000 people at the start of the war return, he said.

Like his city, Trukhanov has since February shed a pro-Russia reputation. The Ukrainian flag has been painted onto the walls of most houses. An iconic statue of the Russian empress Catherine the Great has been splashed with red paint and wrapped in Ukrainian colors.

“Yes, I can say they make us nervous here,” Trukhanov said of the Shahed drones, “because although they aren’t fast they fly lower and it’s difficult for air defenses to spot them.” Once over the city, even if shot down before hitting their target, “the shrapnel can hit civilians.”

Ukraine is using HIMARS only to defend itself and not to attack another country, Trukhanov said. There have been no reports, he added, of HIMARS missing their targets and hitting civilians.