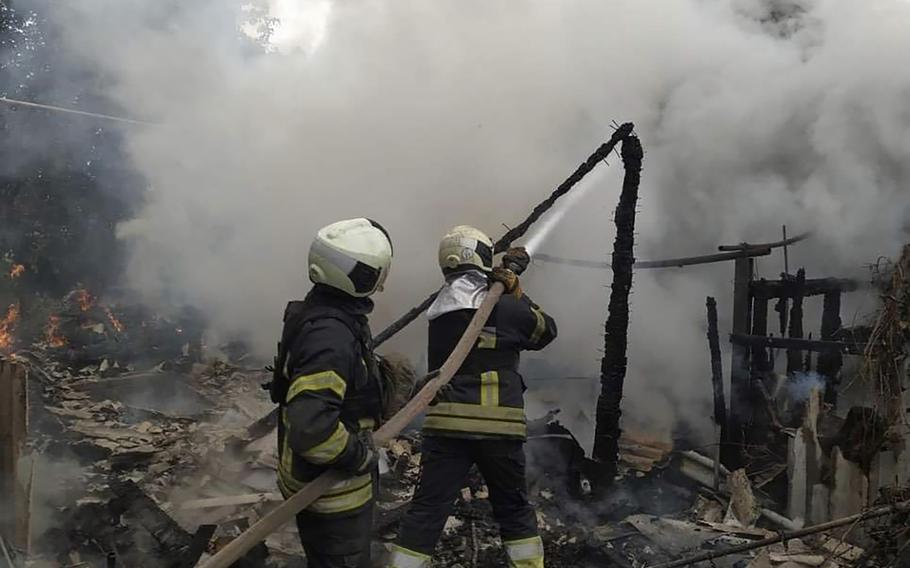 KYIV, Ukraine — Pro-Russian officials in the two self-declared separatist “republics” in eastern Ukraine pleaded Monday for urgent votes calling on Moscow to immediately annex the territories, a sign of apparent panic that the Kremlin’s war in Ukraine is failing.

The appeals from authorities in the Luhansk and Donetsk people’s republics came as Ukrainian forces continued to extend their gains of recent days, having already pushed Russian troops out of most of the northeast Kharkiv region.

Access to the front line by journalists is restricted. But there were reports that Ukrainian troops had pushed into the city of Lysychansk in the Luhansk region, and also of fighting around the city of Slovyansk in the Donetsk region — indications that Russia was at imminent risk of losing territory it had previously controlled in the eastern Donbas region.

In a statement published on the website of the Luhansk People’s Republic’s “public chamber,” the deputy head of the chamber, Lina Vokalova, called for a public referendum to approve annexation and said the vote would “fulfill our dream of returning home — to the Russian Federation.”

A similar message came from the pro-Kremlin puppet authorities in Donetsk.

“It is time to erase the nonexistent border between our countries, as it has long been erased in our hearts, and to conduct a referendum on the question of the DPR becoming part of Russia,” the Donetsk public chamber head Aleksander Kofman said.

Before launching his full-scale invasion of Ukraine in February, Russian President Vladimir Putin had formally recognized the independence of the two areas.

Russian officials have also discussed staging referendums in Ukrainian territories they have seized during the war, but many of those plans have been cast into uncertainty by Kyiv’s recent military gains.

In Moscow, some pro-war propagandists who have been pushing for Russia to hit back harder in Ukraine cheered the calls for annexation.

“Today a referendum, tomorrow — recognition as part of the Russian Federation,” wrote Margarita Simonyan, chief editor of the RT television network. “The day after tomorrow — strikes on the territory of Russia become a full-fledged war between Ukraine and NATO with Russia, untying Russia’s hands in all respects.”

Energoatom, Ukraine’s national nuclear power company, said that a “powerful explosion” occurred about 300 yards from the reactors of the South Ukraine Nuclear Power Plant, near the city of Yuzhnoukrainsk, just after midnight on Monday, sending shock waves that damaged buildings and shattered more than 100 windows.

Details of the rocket strike, which Energoatom reported on its Telegram channel, could not be independently verified. But Ukrainian President Volodymyr Zelensky posted a short video of what appeared to be footage of the strike taken from a closed-circuit camera, along with photos of the damage.

“Russia endangers the whole world,” Zelensky wrote in his Telegram post. “We have to stop it before it’s too late.”

Fears that Russia’s war in Ukraine could cause a nuclear catastrophe had focused so far on the country’s largest atomic energy station, in Zaporizhzhia, where all six reactors have now been shut down. Repeated shelling and fires had disconnected the Zaporizhzhia plant from the national electricity grid, requiring emergency measures to prevent essential cooling procedures from being interrupted.

Before the war, Ukraine had four working nuclear power plants, which accounted for nearly half of the country’s electricity production.

A team of inspectors from the International Atomic Energy Agency visited the Zaporizhzhia plant this month, and the agency’s director general, Rafael Mariano Grossi, has called for the establishment of a “nuclear safety and security protection zone” around the facility, which is in territory occupied by Russian forces.

On Saturday, Grossi reported that the Zaporizhzhia plant had been reconnected to the national electrical grid but that three of four power lines were still cut. “The general situation for the plant located in the middle of a war zone remains precarious,” he said.

The South Ukraine Nuclear Power Plant is away from the front-line fighting, about 250 miles west of the Zaporizhzhia plant, and so faces somewhat less risk. The rocket strike appeared to be part of a barrage of attacks on civilian infrastructure that Russia unleashed following its messy retreat from the Kharkiv region.

The Kremlin’s top spokesman, Dmitry Peskov, pushed back Monday against new allegations of war crimes by Russian troops, which emerged in recent days in Izyum and other Ukrainian cities liberated in Kharkiv. Ukrainian officials have been documenting evidence of potential atrocities, including killings, sexual assaults and torture.

“This is the same scenario as in Bucha,” Peskov said in his daily conference call, referring to the Kyiv suburb where atrocities were discovered in April after Russian forces were repelled. “This a lie,” Peskov continued, adding that Russia would “defend the truth in this whole story.”

The grisly discovery in Izyum of a burial site of 445 unmarked graves, and a mass grave containing the bodies of 17 Ukrainian soldiers, have set off renewed calls for Russian troops, military commanders and officials to be prosecuted for war crimes.

Russia’s chaotic retreat from Kharkiv has revealed deep weaknesses in its armed forces, with analysts and experts saying that it would be difficult if not impossible for Russia to recapture the liberated territories without a full-scale military mobilization and national draft.

Putin has come under increasing pressure over the war, including a stunning public reprimand delivered last week by Indian Prime Minister Narendra Modi at a meeting of the Shanghai Cooperation Organization in Uzbekistan. At the same summit, Putin acknowledged questions and concerns about the war from Chinese President Xi Jinping.

At home, Putin is being squeezed by right-wing hawks who are demanding that he hit back harder at Ukraine and declare a national draft, and from the left by critics of the war, who seem increasingly willing to brave the risk of arrest and prosecution for speaking out.

In a surprising development, Alla Pugacheva, 73, a Russian pop icon who rose to fame in Soviet times and is particularly beloved by older people, publicly voiced her opposition to the war on Sunday.

In a post on Instagram, where she has 3.4 million followers, Pugacheva asserted that Russians were dying needlessly for “illusory aims.”