How the St. Javelin meme raised a million dollars for Ukraine

Saint Javelin doesn’t grace the stained-glass windows of any church. Her halo is a shade of yellow closer to that of sunflowers and wheat than the golden orb on a traditionally canonized saint. Instead of an infant, she tenderly cradles a Javelin — an American-made, handheld antitank missile.

The Mary knockoff might not be a church-sanctioned saint, but in just a few months, she’s developed a following with devotion that rivals that of any high-holiday worshiper. More impressively, she’s raised over 1 million dollars for the Ukrainian resistance against the Russian invasion.

The business is the brainchild of Christian Borys, a former journalist based in Canada, who spent years covering conflict in Ukraine and beyond. A portion of the profits is used to support Ukraine. Borys helped create the image as it’s known now — one that’s now on countless laptops, T-shirts, flags, murals, and even tattoos around the world. His growing team has expanded the roster of weapon-toting saints, selling branded stickers, accessories, and apparel primarily online. On the company’s website, he’s boiled down the mission into a single sentence: “We are in business to re-build Ukraine.”

He’s not an artist, but more a specific kind of storyteller keen on hooking people into an issue by catching their attention with something absurd, funny, or shocking. The campaign has been so effective it earned Borys a spot on Russia’s official blacklist.

“It just shows the significance of what you can do with something that’s, in reality, so silly,” Borys said in a phone interview in July. “And then the Russians got so pissed that they banned us.”

Still ticking upward, the funds raised by the Saint Javelin campaign have gone toward everything from mental health charities to armor purchases for Ukrainian forces to the country’s drone program through United24, an initiative headed by Ukrainian President Volodymyr Zelenskyy.

The blueprint for Saint Javelin came from artist Chris Shaw’s line-towing series of Madonnas in 2012. Shaw painted images of Mary holding items like a 40-ounce bottle malt liquor, a suicide vest, and a rifle. Online, the image evolved into a meme and the rifle was replaced by a javelin. It was that version Borys came across in early 2022 and used as the jumping off point for his campaign. In February, Saint Javelin went viral, and in April, Shaw released his own version of her.

“Perhaps it was a futile attempt to reclaim my art from the internet somehow,” Shaw wrote on his personal website on April 3. “Or maybe it was just that the first viral alteration was a bit sloppy in places.”

Shaw’s painting is on loan to the National WWI Museum and Memorial in Kansas City, Mo. In its description of the piece, the museum notes Saint Javelin’s place in a long history of images of Mary used in times of war. “Use of Christian saint and Virgin Mary imagery to inspire action and foster hope in war dates back centuries,” they write.

Pseudo-prayers and earnest messages of thanks to Saint Javelin are easy to find online, but despite the cult following, the campaign isn’t without its critics. When a Saint Javelin mural was completed in Ukraine’s capital in May by Kyiv-based art group, Kailas-V, the saint’s halo was mysteriously erased. The group reportedly blamed the city’s mayor, Vitali Klitschko.

“Saint Javelin the Scandalous,” Borys quipped on Twitter in response to the criticism in May.

The question of whether the image is blasphemous is a centuries-old one, according to Nora M. Heimann, an associate Professor of Art History at Catholic University.

“You’re stepping into a slipstream as long as the Marian imagery has been in existence: is it even okay to portray Mary?” Heimann asked. “I mean, these are centuries old sources of discourse,” she said.

Because the style of Saint Javelin is clearly drawn upon Byzantine and Orthodox portrayals of Mary, Heimann said it makes sense that some might find it offensive or blasphemous. Borys maintains the decision to use the image of Mary wasn’t one borne out of blasphemy or disrespect.

“Obviously it’s a joke image, right?” Borys said. “It’s a meme. It’s the way that people speak on the internet.”

What started off as a highly-niche online joke on weapons group chats has become a global brand. Borys has a brick-and-mortar office and storefront in Toronto, rents a co-working space in Lviv, and has manufacturers across Ukraine. Saint Javelin is now his full-time job. He’s hoping to continue to grow the movement, and garner more support for the resistance.

“A million bucks is just a drop in the bucket when it comes to fighting a war,” he said.

The Washington Post’s Joshua Carroll contributed to this report. 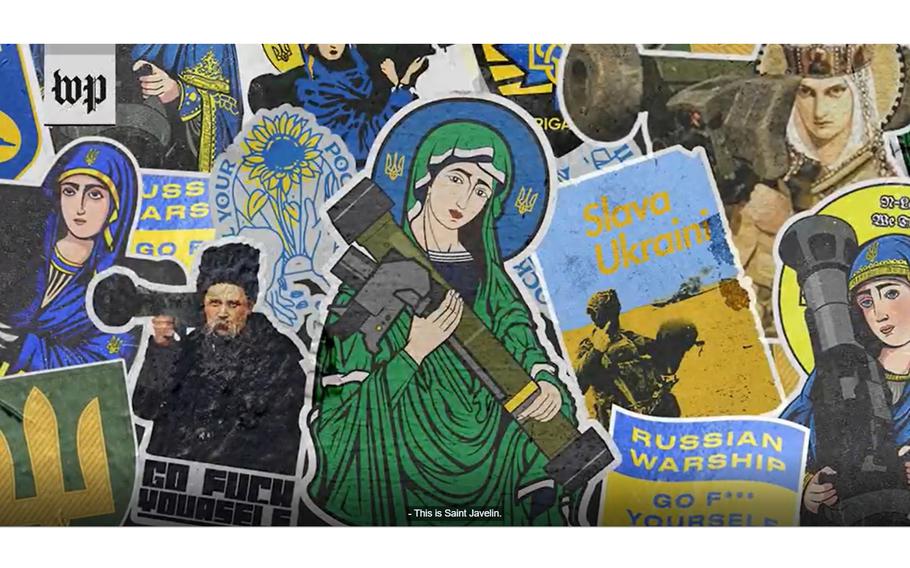