More than 26,000 homes in the northern Dutch province of Groningen have been severely damaged by earthquakes triggered by drilling for natural gas. Ger Warink stands in a doorway of his house in Loppersum. He has been living across the street while his home is repaired. (Sanne Derks/The Washington Post)

GRONINGEN, Netherlands — Earthquakes in this velvety green patch of the Dutch countryside cracked homes, made businesses uninhabitable, even broke up marriages. After billions of euros’ worth of damage, and protests that included local farmers rolling into The Hague on tractors, the Dutch government finally agreed to phase out the natural gas drilling that had triggered more than 1,000 temblors since the 1980s.

But now, as Russia cuts gas flows and energy prices remain high, Europe is resting a covetous eye on this corner of the Netherlands — where 12th-century churches, rustic farmhouses and storybook villages sit atop the continent’s mother lode, a gas field harboring the equivalent of three years of Russian imports.

The United States and Germany in particular have raised a fraught question: Could the Dutch keep drilling in Groningen for Europe’s greater good?

“It should be forbidden to ask us this question,” said Jan Wigboldus, chairman of the local activist group Groninger Gasberaad. “But they do.”

And so this enclave of nearly a half-million people, with 26,000 severely damaged homes, is emerging as a stark test of how far governments are willing to go, and how much people are willing to put up with, in the interest of supporting Ukraine and isolating Russia. 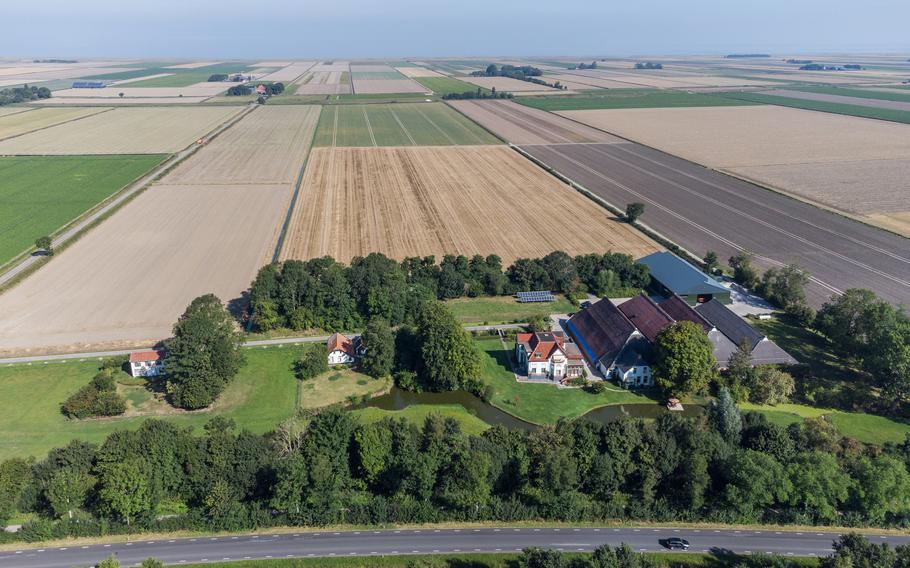 Groningen is a rural province, and farmers have been among the vocal protesters of gas drilling. (Sanne Derks/The Washington Post) 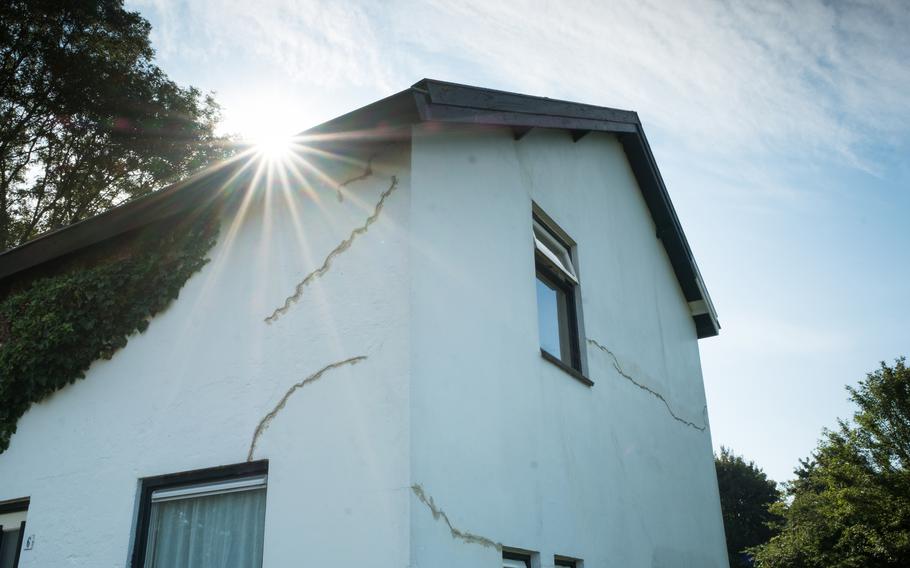 More than 26,000 homes in the northern Dutch province of Groningen have been severely damaged by earthquakes triggered by drilling for natural gas. (Sanne Derks/The Washington Post)

European leaders accuse the Kremlin of weaponizing energy exports in retaliation for the money and weapons the European Union has provided to Ukraine and the sanctions it has imposed on Russia. Russia’s threats to shut off the gas to Europe entirely this winter, and the E.U.’s desire to limit Kremlin leverage, have European governments scrambling — and rethinking the once unthinkable.

The use of coal, a fossil fuel disparaged in green Europe for its high carbon emissions, is surging. Talk of fracking is resurfacing in countries including Germany and Britain that had banned the earth-slamming, ground-contaminating extraction of shale gas. Germany — the continent’s largest economy by far — is also weighing a controversial extension of the life of its nuclear power plants.

“Everything is on the table now,” said Olga Khakova, a European energy expert with the Atlantic Council. “Ideas that seemed extreme or insane in the past are now being considered.”

Nowhere in Europe would the sacrifice be greater than here in Groningen, a province on the North Sea.

On a recent afternoon in the quake-battered hamlet of Woltersum, Laurens Mengerink, a 64-year-old electrical engineer, effortlessly plucked loose a red brick from an outside wall of his dangerously warped home.

Further tremors could critically weaken his house — and ruin his neighbor’s newly completed restorations. Yet Mengerink is among those who support renewed drilling.

“I think we need to reopen the gas tap,” he said.

“We need the gas because of the war in Ukraine, because of Russia,” he said. “We need our own solutions, our own energy, not theirs.” Laurens Mengerink looks at the damage at his house. The bricks, laid in 1905, have been loosened by the tremors. (Sanne Derks/The Washington Post) Cracks caused by the earthquakes streak across the basement of Annette Sins's home in Loppersum. (Sanne Derks/The Washington Post)

Other residents strongly dissent — some of them openly questioning the European sanctions against Russia.

“Restarting the gas would kills us,” said Ate Kuipers, a dairy farmer whose business has sustained nearly $800,000 worth of quake damage. Asked if the gas shortages were worth it to punish Russian aggression, Kuipers paused, then said: “I don’t think so. It’s not realistic. We need the gas from Russia. We need the oil from Russia. We can’t handle everything here with just renewables. . . . And [Europe] can’t have Groningen.”

Dutch officials have sought a middle ground, backtracking on plans to shut down wells this year, while maintaining that drilling will only ramp up in the event of worst-case shortages that cause hospitals, schools and homes to go dark.

Extraction from the sprawling field that once harbored more than 2,700 billion cubic meters (bcm) of gas started in the 1960s. Since the late 1980s, residents have complained of rumblings in the earth that spooked cattle, startled pets and caused what often began as hairline cracks on walls. They say they were told by the Dutch government and the commercial partnership of companies that extracts the gas that there was little to fear from drilling.

At least as far back as the 1990s, official reports documented a relationship between temblors and extraction from the soft, boggy earth of Groningen — which is breached by faults that shudder when withdrawn gas causes the ground to contract like a squeezed sponge.

“But the common opinion at the time was that the impact and maximum magnitudes were relatively low,” said Tom van der Lee, head of a parliamentary committee that is now probing the official response to decades of quakes. “It wasn’t taken very seriously.”

That changed 10 years ago, after a 3.6-magnitude quake that felt stronger because of its shallowness in the soft earth. Another relatively strong quake rattled the province in 2018 — the year Groningen farmers, their stables and homes cracking, rolled into The Hague on tractors in protest. That same year, the national government agreed to a phased shutdown.

The main street in Loppersum — a village of 2,500 — is now a grim tableau of the quake years, including small tremors that continue today despite much-reduced extraction. The Lopster Kroon cafe, where locals once nursed mugs of Dutch beer, was forced to close, its brick building marred by cracks that made it unsafe. The bike shop and butcher shut, too, along with a bevy of other businesses, some temporarily, others for good. The Peter and Paul Church — built in 1217 — is covered in massive scaffolding. Some residents have been relocated to clusters of temporary housing.

Many locals are still waiting for the Dutch government — in charge of who gets damage and reinforcement aid, and how much — to definitively agree to claims, a process that for most residents has dragged on for years.

The struggle has taken its toll. Studies by the University of Groningen found that at least 10,000 adults in the region exhibit stress-related health problems due to quake damage.

Ger Warink, a 60-year-old guitar store owner on Loppersum’s main street, said he suffered a heart arrhythmia last year while dealing with an official over restoration plans for his damaged showroom and home. He’s been forced to temporarily move his wares and living quarters to a sturdier structure across the street.

He said he doesn’t want more gas extraction, but believes a restart is inevitable given Europe’s energy crisis. Part of him, he said, would understand.

“Who am I to say it’s not okay to extract the gas because people are dying in Ukraine and the price of gas is exploding,” he said. “It’s horrible. It’s really horrible.”

There are calls for the Dutch to step up.

“Groningen . . . has the potential to weaken Russia’s energy grip over Europe,” Alice Stollmeyer, executive director of The Hague-based Defend Democracy think tank, and Lukas Trakimavicius, an expert at the NATO Energy Security Center of Excellence, co-wrote in an op-ed last month.

“The Dutch could come to the rescue,” they wrote.

Just how much Groningen could ease Europe’s energy crisis is another question. At the peak of extraction, Groningen supplied Europe with roughly 10 percent of its gas. Nearly 450 bcm remains underground, enough to power the E.U. for an entire year, according Jilles van den Beukel, energy analyst with the Hague Center for Strategic Studies, a Dutch think tank.

He estimates the maximum ramp-up technically possible at Groningen is 40 bcm per year — or about a quarter of the gas the E.U. purchased from Russia last year. But Dutch officials call those levels seismically dangerous. Beukel said a ramp-up to 10 or 20 bcm was politically “more realistic,” predicting such a move could lower the benchmark price in Europe by 10 to 20 percent.

“You could say that as Groningen has reduced production in recent years [for its phase-down], Europe’s dependence on Russian gas has grown, as has Putin’s leverage and ability to use gas as weapon,” he said. “I get the feeling the Dutch government is reluctant to increase Groningen production, because they see it as a political nightmare. But as a citizen, I say, they should do it.”

In January, as fears of a Russian invasion built, German suppliers stoked the ire of Dutch officials by seeking to buy more Groningen gas. That same month, U.S. officials sought to discuss energy options with Dutch officials, including what role Groningen could play in easing the region’s gas crisis.

In responses to The Washington Post, U.S. and German officials denied any “pressure” on the Netherlands to restart production, portraying conversations as exploratory.

In recent months, the German government has asked the Netherlands to explore more gas extraction in Groningen, said Hans Vijlbrief, the Netherlands’ state secretary for the extractive industries.

“They indeed mentioned Groningen,” he said. “But basically, we explained to them what I’m saying now. Yes, you can ask for solidarity. But it’s dangerous” to extract gas there.

Vijlbrief said there were technical limitations to how much gas could be sent to Germany, but standing agreements could still compel a ramp-up in production in the event of an “emergency”: “If in Germany people are freezing to death because of a lack of gas, and the Germans have taken all other measures like shutting down industry, and we can solve that by transporting gas from Groningen.” But he called such an event “unlikely.” If a Groningen ramp-up did happen, he said, it would be limited and temporary — with the aim of still sealing wells by 2024.

If emergency drilling did restart, residents in favor say it should be done with new technologies that can stabilize the earth and limit the potential scope of future quakes — and with revenue diverted to aiding the damaged community.

But more extraction is a non-starter for residents like Annette Sins, a 65-year-old nurse whose Loppersum house is cracked from quakes. She is deeply sympathetic to Ukraine’s plight — and has joined weekly community meetings to gather donations and aid. But she is also certain that more gas extraction here will not help Ukraine, or European consumers. The Dutch government — which gets the lion’s share of gas profits — as well as the partnership between Shell and ExxonMobil that does the drilling, she said, would surely reap any rewards.

“We are still having earthquakes, and they cannot predict what will happen if they take more out,” she said. “ ‘Oh, it might mean a little bit of damage,’ they say. But there’s still a chance of a big earthquake, and then our houses will collapse.”

The Washington Post’s Michael Birnbaum in Washington contributed to this report.