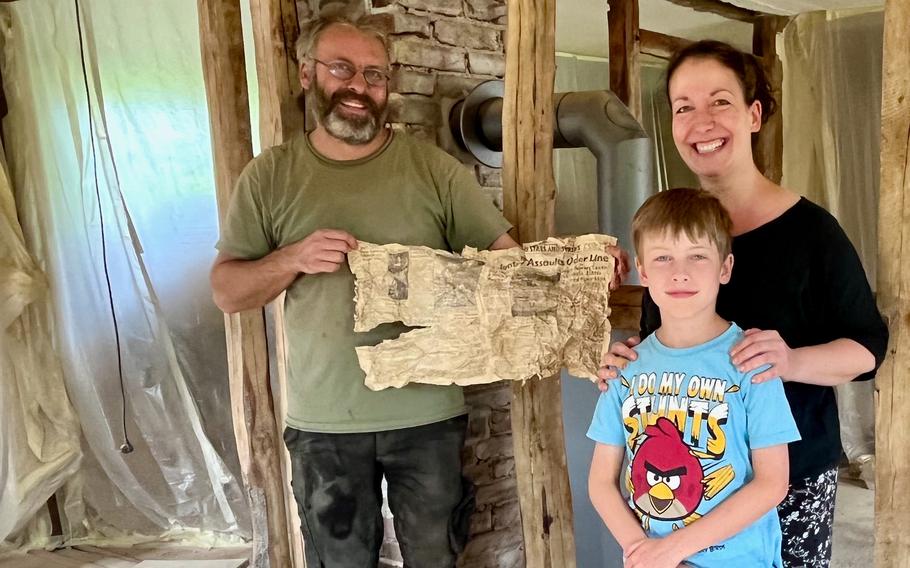 Niko and Franziska Foerster, with their oldest son Karl, and the Stars and Stripes newspaper they found in the wall of their home recently in Rohren, Germany. (Elke Bourgeret/Aachener Zeitung)

KAISERSLAUTERN, Germany — A centuries-old farmhouse nestled along the German border with Belgium turned up several surprises during a major renovation, including a piece of American World War II history.

By August, Franziska and Niko Foerster had nearly gutted another room in their newly purchased 18th century, half-timbered house in the town of Rohren to install modern plumbing and heating. While peering between the old wooden beams, they noticed a crumpled ball of tan newspaper covered in debris.

Shaking off the dust, Niko gently smoothed out the paper’s frayed edges and revealed an edition of Stars and Stripes, dated Saturday, February 3, 1945.

“We saw it was an American paper and were absolutely astonished,” Franziska Foerster said. “It was so unusual and unexpected.”

The bold banner headline tells of Russian infantry assaults on the Oder river, east of Berlin. Other parts of the front page show images of a “Buzz-Bomb” rocket test by the Army Air Forces, updates on Canadian soldiers going AWOL and currency exchange rates in France.

A small language section shared a few phrases, such as "Where are the weapons hidden?” and “I want my hair cut,” in French and German to allow GIs rudimentary communication in the occupied areas.

“The notes even include aspects of our local dialect, which I think is quite funny,” Franziska Foerster said.

The Foersters said surviving images show the town was nearly leveled by the end of WWII.

The edition found by the Foersters was printed in Liege, Belgium, about an hour’s drive from Rohren, which is in Germany’s Eifel region. A copy of Stars and Stripes, dated Feb. 3, 1945, was found in the wall of an old farmhouse in Rohren, Germany. The paper was printed in Liege, Belgium, about an hour drive from the house. (Elke Bourgeret/Aachener Zeitung)

It’s unclear how the military newspaper ended up in the old house, however.

While Rohren was traditionally a sleepy hamlet, the days in the frigid fall and winter of 1944 and 1945 were turbulent.

A final German offensive in December 1944 attempted to recapture the occupied area from the Americans. The heavy fighting left its mark on the Foersters’ home.

“We’ve found grenade fragments during all phases of construction, embedded in all kinds of beams of the house,” Franziska Foerster said. “So we knew that this must’ve been quite scary during the war here.”

The few remaining residents ignored an evacuation order and stayed behind in forest camps, seeking shelter in makeshift huts in the hills surrounding the town, according to the Monschauer Country historical society.

Whoever carried the paper into town was likely to have been a member of the 1st Army’s 9th Infantry Division, which breached the Monschau region in 1944.

Stars and Stripes journalist Russell Jones, who was attached to the unit, reported the capture of Rohren on Feb. 1, 1945, just before the edition found by the Foerster family was published.

There are few witnesses left, Foerster said, except a neighbor who was born in the house but remembers little from his early childhood days.

For Franziska Foerster, the newspaper tells a bit more of the story.

“You feel that the house has a history,” she said. “The atmosphere is part of why we bought it. But when you learn more about what it looked like here during the war, it takes on a different meaning.”

Franziska Foerster said she fixed the fragile pages between two acrylic glass sheets to keep the brittle paper from falling apart. It now hangs near its original location.

“This find is really fascinating,” she said. “It makes the town’s history almost graspable. It truly belongs to the house.”

Stars and Stripes archivist Kat Giordano contributed to this report. 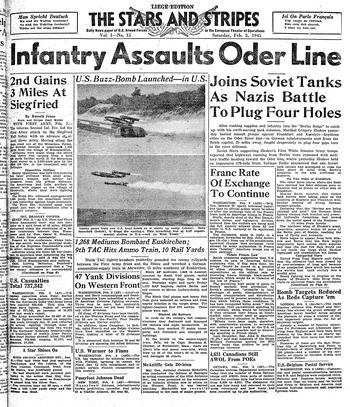 An archival scan of the Stars and Stripes front page for Saturday, Feb. 3, 1945, printed in Liege, Belgium. A copy of the newspaper was found recently during renovation work on a centuries-old farmhouse in Rohren, Germany. (Stars and Stripes)