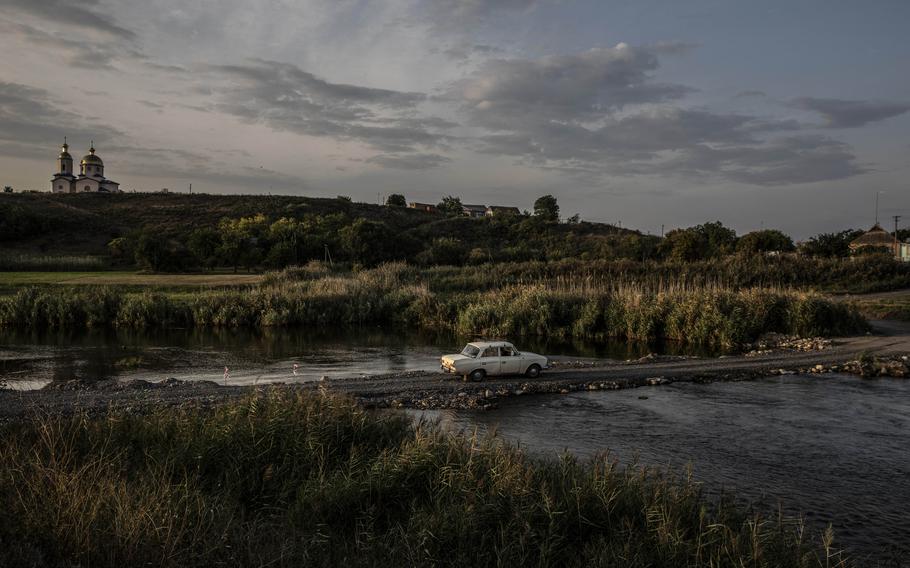 A car leaves the Russian-occupied Kherson region of Ukraine by way of a makeshift bridge. (Heidi Levine/for The Washington Post)

KHERSON OBLAST, Ukraine — Ukraine’s military has kept Ukrainians and the world guessing about the counteroffensive it claims to have launched in this Russian-occupied territory, but Oleksander Skovorodka already feels a shift.

The 32-year-old resident of Kamyane, a village surrounded by Russian forces, said the pitch of artillery volleys from both directions has ramped up. He and his neighbors have watched Ukrainian attack helicopters buzz the treetops on their way south. On Wednesday evening, Ukraine military vehicles plied the dirt lane in the oblast’s northwest corner where he and his wife, Taisia, were driving on their way to buy food.

“We can hear more fighting, more shelling,” he said. “The Russians are just over there.”

The lane is one of the routes that lets them avoid areas controlled by the Russian invaders, who now occupy nearly all of this 11,000-square-mile strategically vital region, including its capital, the Black Sea port city of Kherson.

The lane skirts forests and pastures and leads to a makeshift bridge of gravel and pipes across the Inhulets River, which divides Kherson from Ukrainian-controlled regions to the north and west. In recent days, Kherson residents have used the crossing to flee the fighting, most of them heading to the nearby city of Kryvyi Rih.

“They cross every day,” said Oleksander Pokusayev, who lives in the adjacent village of Shestirnya, just inside free Ukraine. He had ridden his Soviet-era Voskhod motorcycle to the Kherson side of the bridge, where he frequently fishes. “I saw two minibuses full of people earlier today,” he said.

With the only official crossing more than 100 miles to the north in Zaporizhzhia — an abandoned village where access is controlled by opposing armies at either end of a tense no man’s land — evacuees increasingly must find other options. Some are swimming the Inhulets, which is what Pokusayev’s sister-in-law did when she fled Russian occupiers in the village of Borozenske.

“She had to walk through forests for two days. She swam across and Ukrainian soldiers helped her to safety,” he said. “Her husband is still in the occupied side.”

As he was talking, a Ukrainian patrol came along, stopping to check on the safety of four Washington Post journalists. Because of the offensive, and increasing maneuvers by both sides, the Ukrainian soldiers said the Kherson side of the river was increasingly unsafe.

“It’s very risky here now,” said one soldier, who asked not to be identified by name or unit. “The Russians are very close, and their weapons are not very precise. Their rockets can go anywhere.” 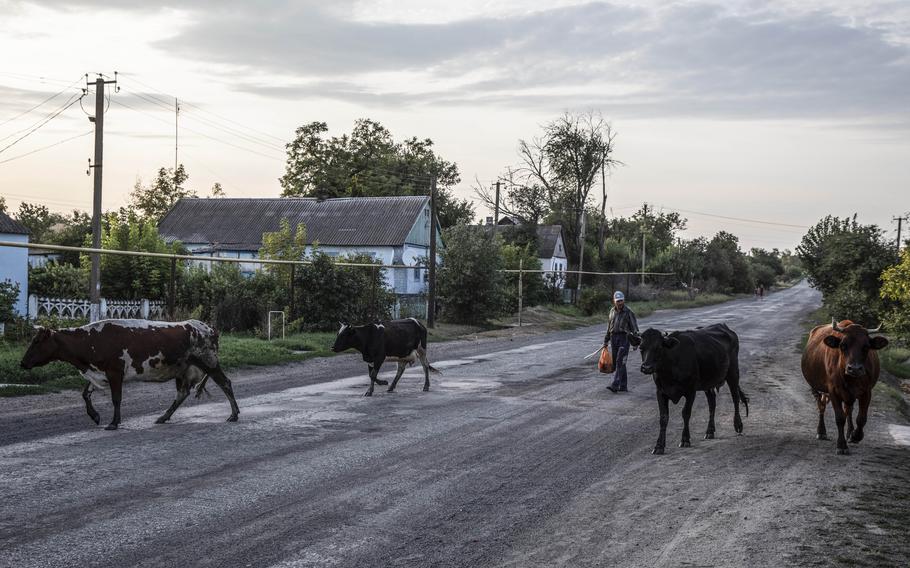 A farmer and his cattle head home in Ukraine. (Heidi Levine/for The Washington Post)

Kherson was the first strategically important city captured by Russia at the start of the invasion in late February, and the broader Kherson region helps form Russian President Vladimir Putin’s coveted “land bridge” to Crimea, which Russian invaded and annexed in 2014.

Residents of the area have seen control of villages in Kherson swing back and forth. After Russians seized many of the communities in the early weeks of the invasion, Ukrainian forces pushed across the Inhulets in May, liberating several of them. Ukrainian troops used Pokusayev’s village as a base for more than a month of shelling in advance of that push.

Now, residents hope the new offensive will push the Russians out of artillery range. So far, however, the shelling has only worsened.

“They still hit a lot of houses; they try to hit the church,” he said, pointing at the gold dome visible across the river. “My house has been shot twice.”

For months, Western intelligence and military analysts have said Ukraine was preparing a major campaign to retake Kherson and the surrounding territory. The regional capital, a gateway between the Dnieper River and the Black Sea, is a major economic hub.

Ukraine hopes that retaking the region from the Russians — who were reportedly planning to stage a referendum in advance of annexing it as part of Russia — will swing momentum its way in what has become a stalemated war.

It is unclear whether the operation launched Monday is the predicted large-scale campaign.

Information from inside Kherson has been scarce. Military officials have barred reporters from accessing front-line areas across the country through at least Monday, a level of restrictions unprecedented in the six months since the start of the Russian onslaught. They have asked Ukrainians to be patient and warned that operational security means information about the campaign will be slow to emerge.

“It’s going to take as long as needed and nobody is going to rush it because people expect something dramatic and exciting,” said Andriy Zagorodnyuk, a former Ukrainian defense minister who now runs the Center for Defense Strategies, a military think tank in Kyiv. “They’re going to be doing it safely, whatever time it takes,” Zagorodnyuk said. Men look for mussels as a car leaves the Kherson region on Aug. 31. (Heidi Levine/for The Washington Post)

Ukrainian officials said “tough battles” were raging within the oblast and that their forces had destroyed numerous weapons depots and command posts. At the beginning of the campaign, Ukraine said it demolished major bridges across the Dnieper, cutting Russian supply routes.

Russia has acknowledged that a major campaign is underway but said that it has already had a heavy toll in Ukrainian lives, tanks and equipment. Wounded soldiers have reportedly begun to arrive in Mykolaiv, a coastal city just outside the oblast’s western border.

A Pentagon official Monday verified an “uptick” in fighting inside Kherson, including artillery and rocket attacks, but could not confirm that a major counteroffensive was underway.

The information vacuum has left Kherson residents in and out of the territory scrambling to find out more. In Kryvyi Rih, where the city government has set up 89 shelters to house more than 35,000 evacuees from Kherson, people who fled the fighting scroll through Telegram channels and chat groups to find out what is happening at home.

Svetlana Kulybanych, 60, and her family are living in a Kryvyi Rih orphanage that has been converted into a shelter. She regularly phones one of the few friends who has remained in their home city of Nova Kakhovka, 25 miles from the city of Kherson.

Something big is definitely happening, the friend reported Wednesday.

“She said the Ukrainians are shelling in the city and they have destroyed a lot of depots and places where the Russians stored their equipment,” Kulybanych said. “Now the Russians are hiding between the buildings.”

If this is Ukraine’s big push to expel the Russians, Kulybanych prays that the troops prevail soon. She and her husband, who is recovering from a heart attack he suffered on the day of the invasion, want to go home.

“We want to start rebuilding while are still young and strong enough to do it,” she said.