Ukraine lures Russian missiles with decoys of US rocket system 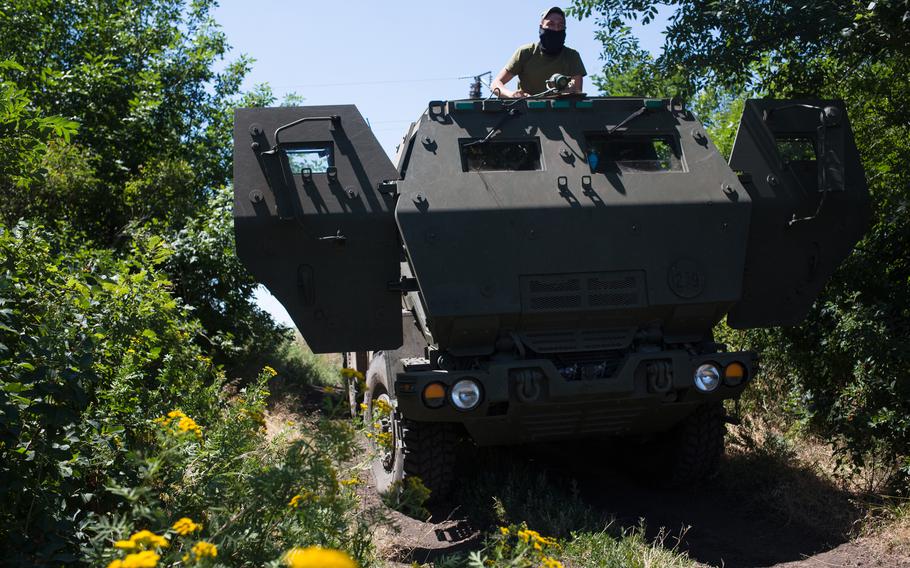 A Ukrainian serviceman is seen with a HIMARS in July. (Anastasia Vlasova/The Washington Post)

KYIV, Ukraine — Ukraine may be outgunned but in the latest sign it is not yet outfoxed, a fleet of decoys resembling advanced U.S. rocket systems has tricked Russian forces into wasting expensive long-range cruise missiles on dummy targets, according to interviews with senior U.S. and Ukrainian officials and photographs of the replicas reviewed by The Washington Post.

The Ukrainian decoys are made out of wood but can be indistinguishable from an artillery battery through the lens of Russian drones, which transmit their locations to naval cruise missile carriers in the Black Sea.

After a few weeks in the field, the decoys drew at least 10 Kalibr cruise missiles, an initial success that led Ukraine to expand the production of the replicas for broader use, said the senior Ukrainian official, who like others spoke on the condition of anonymity to discuss sensitive military matters.

The use of rocket system decoys, which has not been reported previously, is one of many asymmetrical tactics Ukraine’s armed forces have adopted to fight back against a bigger and better-equipped invading enemy. In recent weeks, Kyiv’s operatives have blown up rail and electricity lines in occupied Russian territory, detonated explosives inside Russian arms depots and assassinated suspected collaborators.

“They’ve claimed to have hit more HIMARS than we have even sent,” one U.S. diplomat observed.

The lengths at which Ukraine has gone to protect Western-supplied rocket systems underscore their importance on the battlefield.

The systems are credited with blunting Russia’s advance in the east and south by giving Ukraine the ability to strike from 50 miles away, laying waste to hundreds of high-valued Russian targets, including supply lines, arms depots and logistic and support hubs, U.S. defense officials say.

“We are aware of these latest claims by Minister Shoigu, and they are again patently false,” said Todd Breasseale, the Pentagon’s acting spokesman. “What is happening, however, is that the Ukrainians are employing with devastating accuracy and effectiveness each of the fully accounted for precision missile systems.”

The Pentagon says it has provided 16 HIMARS to Ukraine since the start of the war. U.S. allies have provided M270 rocket systems that have a similar functionality. It was not possible to independently verify how many are still operational or how many, if any, were destroyed.

The Russian habit of embellishing battlefield performance is hardly new, but experts say the decoys probably account for a dramatic disconnect.

“If the Russians think they hit a HIMARS, they will claim they hit a HIMARS,” said George Barros, a military researcher at the Institute for the Study of War, a Washington think tank. “Russian forces very well may be overstating their battle damage assessments after hitting HIMAR decoys.”

Using decoys for deception has a long history for militaries in the East and West.

The Russians call the tactics of disguise and trickery “maskirovka,” which has involved the procurement of inflatable MiG-31 fighter jets and mock S-300 missile systems among other tools. Slobodan Milosevic’s Yugoslav forces used mock tanks and dummy targets against NATO forces during the Kosovo conflict. Allied powers during World War II used decoy equipment and fake signals intelligence to try to misdirect German forces ahead of the Allied invasion of Normandy.

For Ukraine, the battlefield advantages of decoys are twofold, military analysts said.

In a protracted artillery war, finding ways to degrade and deplete Russia’s larger arsenal of rockets and missiles is critical for Ukraine’s smaller army.

U.S. defense officials say Russia’s stockpile of precision-guided missiles has been running low, and U.S. export controls on microchips are making it “a lot harder” for Russia to replenish those munitions, Colin Kahl, undersecretary of defense for policy, said earlier this month.

“A Kalibr missile launched at a fake HIMARS target in a field is a missile that can’t be used against a Ukrainian city,” said Rob Lee, a military analyst at the Foreign Policy Research Institute.

Another advantage of decoys is they could force Russians to take precautions and move their ammunition depots and command and control nodes farther from the front lines — beyond the anticipated range of the HIMARS.

“Such a reorganization would degrade the Russians’ ability to mass artillery fires — a tactic they’ve relied on to make gains in eastern Ukraine,” Barros said.

The challenges that lay ahead for Ukraine’s military remain daunting. Russian President Vladimir Putin signed a decree last week to increase the size of Russia’s armed forces to 2.04 million from 1.9 million, in a move analysts said indicated a determination to keep fighting.

U.S. officials estimate Russia has lost up to 80,000 troops, but Ukrainian forces have acknowledged losing 100 to 200 troops per day as the country braces for one of its coldest winters in decades.

In describing the country’s replicas, the Ukrainian official said his military had no choice but to resort to unconventional tactics in fending off a bigger adversary. “A small Soviet army cannot beat a big Soviet army,” the official said. “We need to fight asymmetrically.”