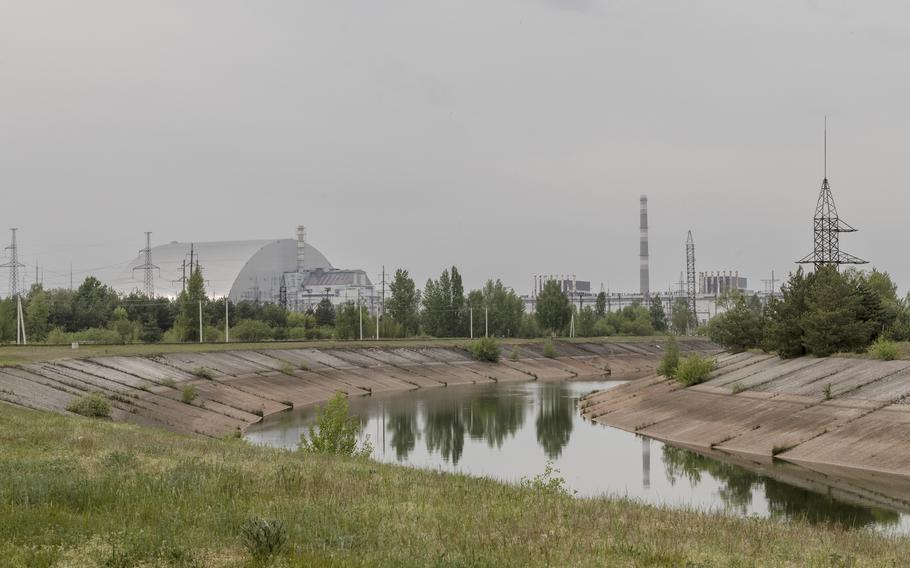 The Chernobyl nuclear power plant, which was under Russian occupation shortly after the start of the invasion of Ukraine, on May 20, 2022. (Kasia Strek, Panos Pictures/For the Washington Post)

CHERNOBYL, Ukraine — At home in Kyiv, Yaroslav Yemelianenko was glued to a secret live stream of the gate to Chernobyl, the site of the world’s worst nuclear disaster. In disbelief, he watched as Russian tanks rolled by the yellow information booth advertising his company, Chernobyl Tour, and drove south toward the capital.

It was hours into the first day of the war, Feb. 24. Publicly, Ukraine’s leaders said Russian troops had not yet crossed there.

“It was confusing, and it was scary,” she said. “It was different from what the authorities were saying.”

Chernobyl Tour had a small, battery-operated camera perched by the checkpoint into the zone that Yemelianenko and Aslamova could remotely access. It was there to monitor their booth. But the day of the invasion, they said, it provided early information about Russia’s movement of troops through Belarus and past Chernobyl as Moscow began its attempt to take Kyiv.

“The first thing that the Russians did when they passed the checkpoint of Chernobyl was taking off the Ukraine flag and shutting off all the cameras,” Aslamova said.

But they missed the little camera at the booth, which kept rolling. So the tour operators started to count the number and type of military vehicles. One hundred. Five hundred. It kept going. Yemelianenko said he passed that information to contacts at Ukraine’s military and intelligence agency. The Kyiv-based tour guides also contacted the company’s network of employees in villages around Chernobyl who were coming under Russian occupation.

Within a day, Chernobyl Tour had transformed into a sort of Ukrainian network of informants tracking Russian troop movements. Its employees were part of something that became key to Ukraine’s resilience: the will of everyday people to take the defense of their nation into their own hands.

“We had a responsibility,” Yemelianenko said.

It’s impossible to know how much impact singular actions have had on the war’s wider trajectory. After nearly six months of fighting, however, the power of individual civilians and businesses has clearly become central to Ukraine’s strategy and wartime mindset.

By the end of the war’s first day, Russian forces had captured Chernobyl. For five weeks they held this strategic area, about two hours’ drive from Kyiv in normal times, in its failed campaign to take Ukraine’s capital. 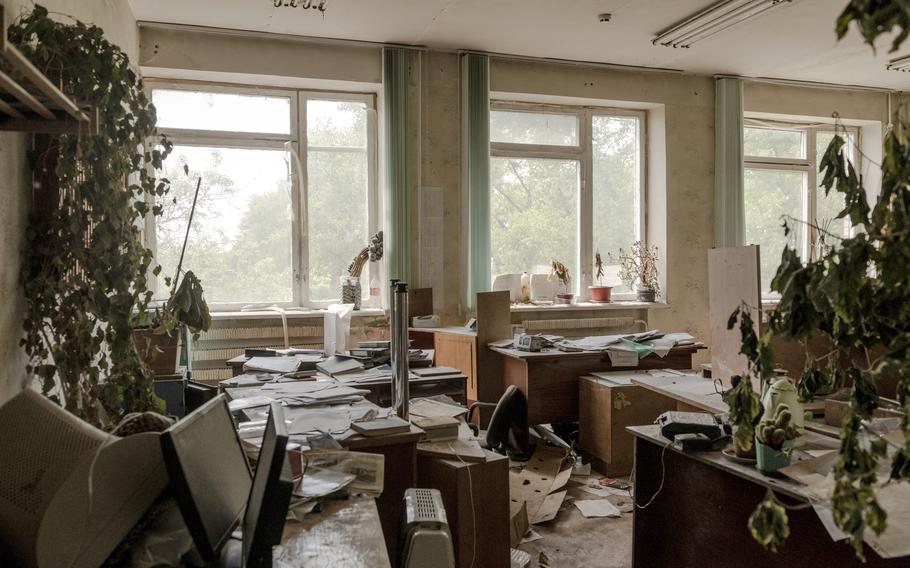 An administrative building in Chernobyl, which was used by Russian forces as their headquarters during the occupation, on May 20, 2022. (Kasia Strek, Panos Pictures/For the Washington Post)

Chernobyl Tour provided The Washington Post with its surveillance footage and accounts of Russian troops crossing from Belarus. The group said it chose to share its story only when it could ensure the safety of all employees.

Ukraine’s Security Service and Armed Forces did not respond to a request for comment on any assistance it received from the tour group.

The Russian occupation of the defunct Chernobyl nuclear reactor site — where Soviet authorities initially tried to hide the 1986 explosion to disastrous effect — did not lead to the mass radiation leakage many had feared.

But after nearly six months under Russian control, risks are rising in Ukraine’s southeast at the Zaporizhzhia nuclear power facility, Europe’s largest. There the security situation is quickly deteriorating amid rising worries of potential nuclear disaster. As in Chernobyl, Zaporizhzhia plant workers are taking grave risks to sneak out critical information.

Before the war, Chernobyl Tour took visitors to the “exclusion zone,” a 1,000-square-mile area where radioactive contamination is highest. Visitors would see the reactor site, the city the Soviets built to house workers, and the natural habitats that have since flourished in the isolated area.

During the 25 days of Russian occupation of the Chernobyl plant, nine workers were killed and five were kidnapped. The Russians also stole hundreds of computers, radiation dosimeters, firefighting equipment and irreplaceable software.

Chernobyl Tours said it could not provide certain details of the group’s work because of its sensitive nature. Also, they said, they deleted nearly all communication in the war’s first weeks to protect sources, especially in case Russian forces captured Kyiv. The videos and Telegram exchanges the group did preserve, which they shared with The Post, appear to corroborate their account.

Feb. 24 started out quiet near the tour company’s camera at the Chernobyl booth, Aslamova said.

On the video feed, she could see Ukrainian soldiers hanging around. One fed a dog. Suddenly they retreated away from the border. It was quiet again. Then a column of military vehicles marked with the letter V — one of the letters identifying Russian troops — started to pour in, Aslamova said.

After two days, the flow of military vehicles slowed. A few days later, the camera stopped. Yemelianenko could not exactly say when but said it either ran out of batteries or was knocked out by the Russians.

By then, the Russians had shut off internet service and phone lines. It was almost impossible to get information in and out. But Chernobyl Tour employees tried anyway.

Until the invasion, the company’s local employees based in surrounding villages had provided logistical support for tourists; afterward, they stayed and gathered information about their attackers.

The group’s local staff declined to speak with The Post, citing privacy and safety concerns. But a few saved Telegram screenshots shared by Chernobyl Tour that capture what happened next.

For several harrowing weeks, about 10 employees, along with trusted family members and neighbors, secretly recorded the number, location and direction of Russian military vehicles and supplies, Yemelianenko said.

At grave risk, the villagers headed into fields and forests in search of cellphone service to send their notes back to Kyiv.

In the capital, Yemelianenko said, he and his team shared the information with intelligence contacts. They also tried to send information about the war back to the villages to counter Russian propaganda, and they lobbied for a humanitarian corridor to evacuate Chernobyl civilians.

Chernobyl Tours, however, was running its own misinformation campaign.

Yemelianenko, who also joined Ukraine’s Territorial Defense Forces, launched what he called a “special information operation.” He tried to scare Russians into leaving Chernobyl by telling media that soldiers sleeping in trenches or pillaging items from villages in the area were being exposed to dangerous radiation levels.

“To be honest, that was a huge exaggeration,” Yemelianenko said. “The goal was to make Russians concerned ... that they were all going to die.”

Yemelianenko had grown up amid fears of Chernobyl. His family evacuated Kyiv soon after the 1986 meltdown.

Years later, he became interested in learning more about Chernobyl and, after extensive studies, co-founded his tour company. Part of the group’s message is that Ukraine’s successful cleanup of the area is something to celebrate. To that, he said, he will now add Chernobyl’s work against an invading army.