Vitali, 45, left, and Yuri, 44, in the trenches on the Kherson front line, are among the Ukrainian fighters trying to recapture occupied territory that links Russia with Crimea. (Wojciech Grzedzinski for The Washington Post )

MYKOLAIV REGION, Ukraine - On the front line in southeast Ukraine, there is little sign that a major counteroffensive is brewing.

For weeks, Western intelligence and military analysts have predicted that a Ukrainian campaign to retake the strategic port city of Kherson and surrounding territory is imminent. But in trenches less than a mile from Russia's positions in the area, Ukrainian soldiers hunker down from an escalating onslaught of artillery, with little ability to advance.

"It's to our left side, our right side, over our heads," said Yuri, a 45-year-old soldier with the Ukrainian military's 63rd Mechanized Brigade said of the incoming fire, which has intensified over the past week. At night, Russian forces make reconnaissance missions that probe the tenuously held farmland. "It's a more tense situation," he said.

Retaking Kherson would mark a devastating blow to Russian President Vladimir Putin's ambitions in Ukraine. The wider region is crucial to providing fresh water to Crimea, a problem that has cost Russia billions of rubles since its illegal annexation of the peninsula in 2014. It is also a key foothold for any future Russian military push in the south toward Odessa, the coveted jewel on the Black Sea.

But time is slipping if Ukraine is to meet President Volodymyr Zelensky's stated goal of winning the war by the end of the year, and the current situation on the ground raises the prospect of a long, grinding stalemate instead. Residents who have fled villages in the Kherson region have described Russian forces moving in reinforcements, and officials have eyed those troop movements warily.

"They've dug in," said Oleksandr Vilkul, head of the military administration in Kryvyi Rih, after returning from a trip to inspect the front lines on Sunday. "We know that they are trying to fortify their positions. The enemy has significantly increased its artillery along the entire line," he said of the 60-mile long front line, after returning from visiting positions on Sunday. Oleksandr Vilkul, the head of the military administration of Kryvyi Rih, said Russian forces occupying Kherson were digging in and fortifying their positions. (Wojciech Grzedzinski for The Washington Post )

Lacking the basic artillery and armored vehicles needed to progress, Ukraine has focused on operations far behind the front lines. That includes a mysterious attack earlier this week on a Russian air base in Crimea, a major supply hub for Russian operations in Kherson previously assumed to be out of its enemy's reach.

The progress Ukrainian forces had made here in recent months - recapturing a string of villages from Russia's control - has largely stalled, with soldiers exposed in the open terrain.

The roads that soldiers zip along among the scorched wheat fields at the front lines are pockmarked with craters from previous strikes, guided by Russia's Orlan drones that allow them to pick and choose targets.

"There is nowhere to hide," said Yuri, who has fought here without a break since the beginning of the war, and like other soldiers did not give his last name, in line with protocol. His unit has a hodgepodge stock: modern antitank weapons and a Soviet machine gun manufactured in 1944, and the focus here is holding the line.

Ukrainian military officials are tight-lipped on any timeline for a wider push, but say they need more supplies of Western weapons before one can happen. Ukraine lacks the capacity to launch a full-scale offensive anywhere along the 1,200-mile front line, one security official conceded.

"We have to be honest - for now, Ukraine doesn't have a sufficient number of weapons systems for a counteroffensive," said a defense and intelligence adviser to the Ukrainian government who spoke on the condition of anonymity because he is not authorized to speak to the press.

"It's still possible to get a result, but if so it will be the result of smart Ukraine strategy more than of countering Russia with equal power," the adviser said. "It's very difficult to match them." 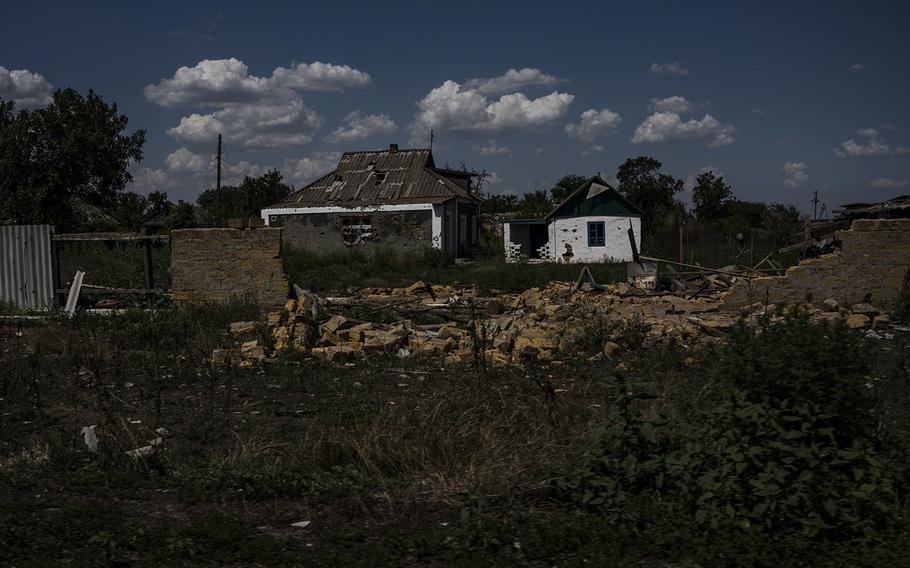 A destroyed home in a village near the Kherson front line. (Wojciech Grzedzinski for The Washington Post )

"I think once we get the full package of this aid, our counteroffensive will be very quick," he told RBC newspaper, urging people of Kherson to be "a little patient."

"It will not be as long as everyone expects," Marchenko added.

Others have appeared to temper expectations, stressing that the situation is dynamic. In recent days, Russia has launched a new assault on cities in Ukraine's east.

"It changes pretty much every day because the enemy moves their forces and we change our tactics and maneuvers," said Yuriy Sak, an adviser to the defense minister. "Things change and plans change."

The counteroffensive "is already happening" in the way that is feasible, said Natalia Humeniuk, a spokeswoman for the Ukrainian military's Southern Command, adding that progress will be "little by little" and pointing out that the conflict is a "hybrid war."

Some have even hinted that the offensive here may have been trumpeted as part of a campaign of informational warfare, designed to draw Russian firepower away from areas farther east.

And Russia has been reinforcing. About 3,000 troops have arrived in the Kherson region over the past week alone, bringing to at least 15,000 the number of Russian troops on the western bank of the Dnieper River, the intelligence adviser said.

Most of them are elite airborne troops who are helping to bolster exhausted Russian forces who have been manning the front line for months, said Kirill Mikhailov, a Kyiv-based analyst with the Conflict Intelligence Team, a Russian research and investigative group. 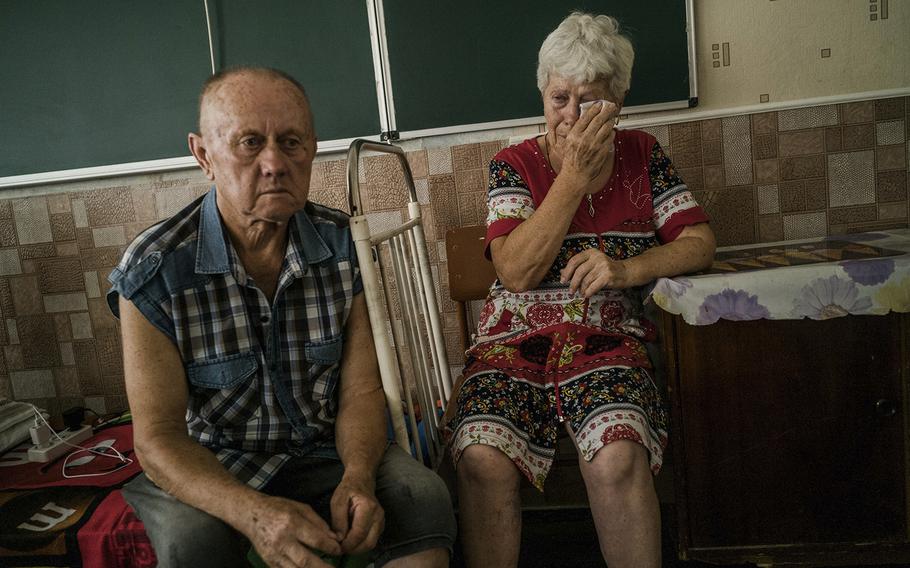 Serbin Fedok, 70, left, and Valentina Yefimenko, 66, now live in the city of Kryvyi Rih, in a shelter for Ukrainians displaced by the war. (Wojciech Grzedzinski for The Washington Post )

"Two weeks ago they came in with big equipment," said one 42-year-old from Novovorontsovka, near Kherson, who is in touch with parents there. "They are setting up bases in houses." A 65-year-old who left the tiny village of Mar'ine on June 11 said Russian forces who had barely been visible earlier in its occupation began moving in large numbers in the days before she fled. "They were digging in trenches," she said.

The troop movements have raised concerns that Russia could be preparing its own new offensive in the area. But while Russia may try to recover some of the villages retaken by Ukrainian troops in recent months, they also lack the means to launch a large-scale operation, analysts and officials say.

The forces around Kherson city constitute Russia's only foothold on that side of the river, a natural defensive barrier that carves through Ukraine and requires supply routes to pass through several highly vulnerable chokeholds.

Those supply routes have proven vulnerable to Ukraine's new U.S.-supplied HIMAR rocket systems. And with its strike on Crimea, Ukraine has demonstrated the capacity to hit the heart of Russian military installations in the major military supply hub for Moscow's operations in the south.

But if Ukraine is to conduct a counteroffensive "the clock is ticking," Mikhailov said. It's going to be the muddy season by October, making military movements difficult.

Outgunned, Ukraine is also using hybrid tactics. In the city, much of the local population is hostile to occupation, said Konstantin Ryzhenko, a Ukrainian journalist in hiding there. Russian soldiers are already not visible on the streets of the city in fear of attacks, he said.

Those who remain, including officers from Russia's FSB intelligence service and police, have moved their bases to civilian locations under hospitals and in urban areas, in fear of HIMAR strikes, Ryzhenko said.

"It just takes one of them to turn around for five seconds for them to be distracted, for them to be hung up and drowned," he said of Russian troops. In late June, a senior Russian appointed official in the city was killed in a bomb blast.

Given the strike in Crimea, Russia's hold over Kherson is in jeopardy, said Dmitri Alperovitch, chairman of Silverado Policy Accelerator, a Washington-based think tank.

"I think the Russians will pull out of Kherson soon," he said. "It's becoming untenable - really hard to resupply forces." A soldier, call sign Petrovich, stands in a trench on the Kherson frontline on August 8. Efforts by Ukrainian forces to recapture seized territory have slowed. (Wojciech Grzedzinski for The Washington Post )

That would stymie any Russian goal, however unrealistic, to take all of Ukraine's Black Sea coast and create a connection to the Russian-controlled territory of Transnistria in Moldova. And others point to Russia's willingness to sacrifice its soldiers even for operations that don't make strategic sense, while Ukraine typically moves forward only with caution.

"The Ukraine army will never do anything stupid, like Russia, throwing people like cannon fodder into battle to satisfy the ambitions of their leaders," Sak said. "The question is the price."

Russia is less militarily vulnerable in areas of Kherson province that lie on the eastern banks of the Dnieper River. That territory is essential to Putin's long-sought "land bridge" to Crimea and its fresh water supply.

In the first days following the invasion, Russian forces blew up a dam in a canal in the region that had long infuriated Putin. Ukraine dammed the waterway in 2014 following Russia's occupation of the peninsula. Once-fertile farmland turned into parched barren flats, and the Kremlin was forced to pay out billions in subsidies and to invest in new water projects.

It's a region Putin is unlikely to relinquish without a ferocious fight.

Although Ukraine has enough manpower to launch a push, Sak said that without more sophisticated weaponry there is a risk of sending troops needlessly to their deaths in an offensive with marginal chances of success.

Some Ukrainian military units are already paying a price. For nearly six months, Ukraine's 28th Mechanized Brigade has fought along the southern front, stopping a lightning advance by Russian forces outside the city of Mykolaiv.

The unit's battle-hardened fighters continue to claw back territory as they inch closer to Kherson. Despite being some of the best equipped and most professionally trained units on the front lines, withering Russian artillery strikes across the open steppe have maimed and killed many of their fighters.

In late July, the 28th Mechanized Brigade's commander, Vitalii Huliaiev, was killed in action and his fellow soldiers intend to avenge his death.

"We will get to Kherson," said a battalion commander for the unit who goes by the call sign Zloi, which translates as Angry or Mean. "We will have our revenge."