Zelenskyy calls on West to ban all Russian travelers 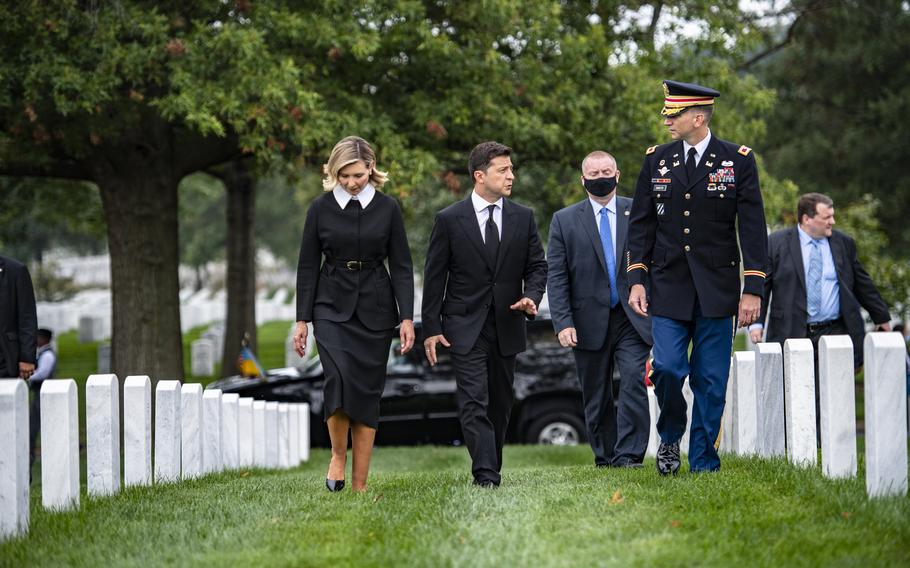 KYIV, Ukraine — The way to stop Russia from annexing any more of Ukraine’s territory, President Volodymyr Zelenskyy said Monday, is for Western countries to announce that they would ban all Russian citizens in response.

In a wide-ranging interview with The Washington Post, Zelenskyy said that “the most important sanctions are to close the borders — because the Russians are taking away someone else’s land.” He said Russians should “live in their own world until they change their philosophy.”

Russian leaders have signaled they could hold annexation votes in the occupied parts of Ukraine’s east and south — in the Kherson and Zaporizhzhia regions — on Sept. 11, alongside regional elections already scheduled to take place. Russian officials say those votes would legitimize Russia’s claim to those areas, but critics say the votes would be a Russian-manipulated farce.

It is unclear what those consequences would be. Much as they did before Russia invaded on Feb. 24, Zelenskyy and other Ukrainian officials are pushing their Western partners to announce sanctions as a deterrent. Zelenskyy told The Post on Monday that the sanctions already imposed on Russia for its unprovoked war in Ukraine are “weak” compared with closing borders to Russian citizens for one year and a full embargo on the purchase of Russian energy.

Russian airlines have been banned from flying over most of Europe and North America, which has made it more challenging for Russians to travel abroad. But there is no blanket ban in place such as Zelenskyy is suggesting; Russian citizens are still free to apply for a visa to visit the United States, for example.

Finnish Prime Minister Sanna Marin told reporters Monday that she believes issuing tourist visas to Russians should be restricted and called for a European Union-wide ban.

Some critics have argued that banning all Russians would unfairly impact those who have left the country because they disagree with President Vladimir Putin’s government and his decision to attack Ukraine.

“They’ll understand then,” he said. “They’ll say, ‘This [war] has nothing to do with us. The whole population can’t be held responsible, can it?’ It can. The population picked this government and they’re not fighting it, not arguing with it, not shouting at it.”

“Don’t you want this isolation?” Zelenskyy added, speaking as if he were addressing Russians directly. “You’re telling the whole world that it must live by your rules. Then go and live there. This is the only way to influence Putin.”

Zelenskyy spoke for an hour in his presidential office, where hallways are kept dark and lined with sandbags to protect against attack. Zelenskyy wore a black T-shirt with the Ukrainian trident symbol, rather than his usual military-green fatigues. He was leaning forward and animated as he answered questions, gesturing with his hands, tapping the white table to make his points.

One challenge for Ukrainian officials pushing for strong measures to prevent a referendum is explaining why it would mark a turning point in the war. The vast majority of the international community wouldn’t recognize such a vote or Russia’s subsequent annexation. But analysts say that once Russians have officially laid claim to territory and declared it part of Russia, it would erase any possibility of Russian troops withdrawing without being forced out militarily.

Ukrainian officials understand Russia’s thinking from experience. Russian forces invaded Crimea in 2014, held a vote that was dismissed internationally and have had control of the peninsula ever since. Officials in Kyiv still complain that the Western response wasn’t strong enough then.

Annexation would also complicate matters for Western countries that have been providing Ukraine with weapons. Officials in Washington and European capitals have carefully sought to limit the weapons they provide for strikes on Russian forces inside Ukraine. But if Moscow considered strikes in post-referendum Kherson and Zaporizhzhia as the targeting of Russian territory, it could risk dragging NATO countries into the conflict.

Zelenskyy has said that annexing territory would rule out negotiations with Russia.

Ukrainian officials are also concerned that Russia will move up its referendum timetable in response to Ukraine threatening a military counteroffensive in the region. Ukrainian forces have been steadily gaining back ground around the city of Kherson, the first major city Russia captured and the only regional capital.

Military advances are often one small village at a time. That progress has been aided some by Ukraine’s use of U.S.-supplied M142 High Mobility Artillery Rocket Systems, or HIMARS launchers, to damage Antonovsky Bridge, which is key to Russia’s efforts to resupply its troops.

Russia appears to be shifting its troops and equipment south in response, potentially setting up a military conflict for the key Black Sea port that analysts say could be key to the trajectory of the war. Zelenskyy said he wanted Russia to know that regaining control of Kherson was just a first step: “Let them know that as soon as we have enough forces and means, we’re going to de-occupy all of our territories.”