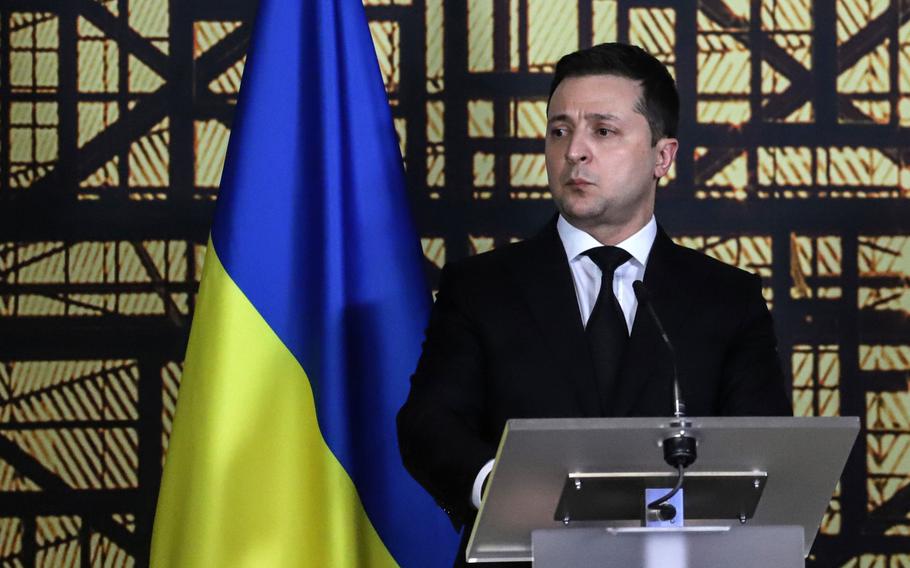 Volodymyr Zelenskyy, Ukraine’s prime minister, at a news conference on the sidelines of the Eastern Partnership Summit at the Europa building in Brussels on Dec. 15, 2021. (Valeria Mongelli/Bloomberg)

The last time the pair spoke was one year ago, Zelenskyy told the South China Morning Post in an interview published Thursday. Since Russia's invasion on Feb. 24, he said the Ukrainian side had "asked officially for a conversation" with Xi but hadn't received a response. Such a dialogue, he added, "would be helpful."

The leader of the world's second largest economy has refused to condemn Russia's war in Ukraine and declared a "no limits" friendship with Putin weeks before the invasion, making any call with Zelenskyy potentially awkward. Xi and Putin spoke within days of the war's beginning, and the Russian leader called Xi on the latter's birthday in June.

Dialogue between Ukraine and China has been limited to lower level diplomatic exchanges, such as those between Foreign Minister Wang Yi and his Ukrainian counterpart.

Chinese Foreign Ministry spokeswoman Hua Chunying said China had maintained communication with "all relevant parties on the Ukraine crisis," at a briefing in Beijing on Thursday. When asked whether there had been direct talks between the two presidents, she said China and Ukraine communicate "through diplomatic channels."

While Beijing has maintained it respects Ukraine's right to sovereignty, it voted against a United Nations court order in March for Moscow to immediately suspend its military operations, refused to join a US-led sanctions campaign to isolate Putin's regime and framed Washington as the "culprit" of the conflict for encouraging the eastward expansion of the North Atlantic Treaty Organization.

Zelensky, 44, said there was still room for China to play a positive role in ending the conflict.

"China, as a big and powerful country, could come down and sort of put the Russian federation in a certain place," he told the Post, adding that his countrymen shared fundamental values with the Chinese.

"Everyone loves their kids," he said. "Everyone wants to live in peace."