American service members in Europe will still be able to ‘taste the rainbow,’ despite EU Skittles ban 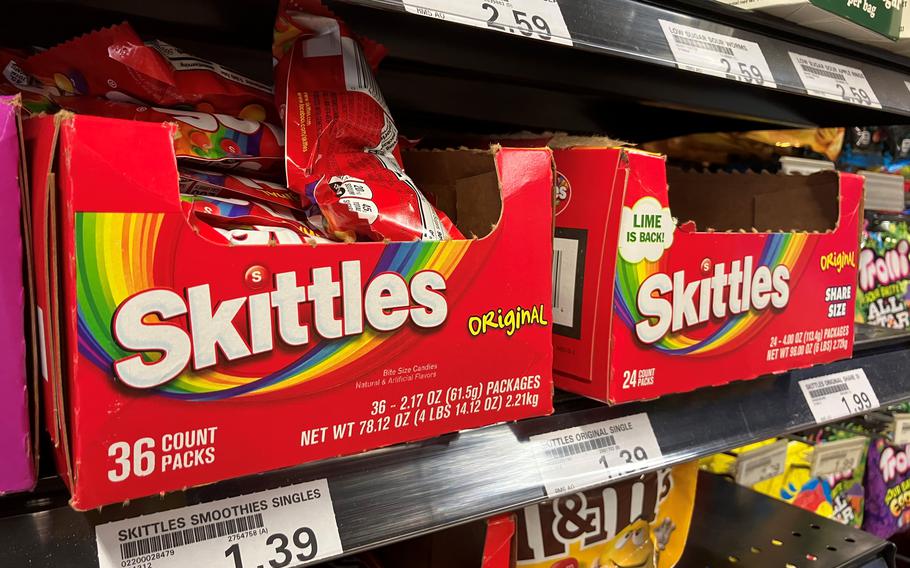 Skittles are sold at the Army and Air Force Exchange Service store on Kleber Kaserne in Kaiserslautern, Germany, Aug. 3, 2022. Skittles will continue to be stocked at AAFES stores despite a European Union ban on an ingredient in the candy.  (Phillip Walter Wellman/Stars and Stripes)

KAISERSLAUTERN, Germany — Army and Air Force Exchange Service stores in Europe will continue to sell Skittles, despite a ban on the popular candy across much of the Continent.

From Sunday, food manufacturers in the European Union will be prohibited from using the color additive titanium dioxide — which is found in the fruit-flavored sweets and other foods — out of fears the substance could damage DNA and lead to cancer.

The U.S. Food and Drug Administration has not recommended a similar ban.

An AAFES spokesman told Stars and Stripes that the company adheres to FDA recommendations concerning food products, rather than European guidelines. Unless the FDA changes course, Skittles will remain on AAFES store shelves in Europe.

“The food additive regulation banning titanium dioxide in the EU does not apply to products sold by the Exchange to the U.S. military community,” spokesman Chris Ward said in an emailed statement.

“If a product is determined to be unsuitable as to quality, value or other appropriate criteria by medical authorities, it is removed from shelves,” Ward added.

Titanium dioxide is used in food manufacturing to add whiteness or boost color. It’s also used in paint, adhesives and plastics. U.S. and EU regulators first approved the use of the substance in food in the late 1960s.

However, in 2020, France banned titanium dioxide and an EU-wide ban quickly followed, after the European Food Safety Authority found DNA damage from ingesting the additive "could not be ruled out.”

Because there were no immediate health concerns, the ban was slowly introduced.

The ban comes after a California man last month sued the Mars candy company, which makes Skittles, for using titanium dioxide as an ingredient, alleging it could cause various health problems.