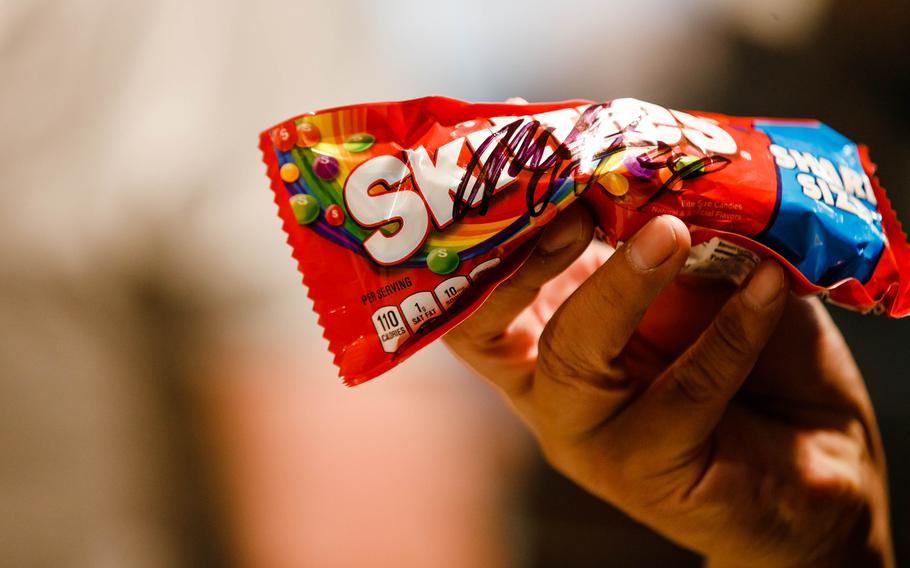 (Tribune News Service) — Health experts advise that "eating the rainbow" is key to a long life, but if the rainbow comes in a Skittles packet, a new lawsuit by a San Leandro man claims, consuming it could cause brain damage, liver lesions and harm to DNA.

Jenile Thames alleged in the suit filed Thursday that the Mars candy company, which makes the iconically colorful treat, broke a 2016 promise to stop using titanium dioxide, a food additive also used in paint, adhesives, plastics and roofing materials, and recently banned from food by the European Union. Thames is seeking class-action status, to bring millions of Skittles consumers into the legal action, according to the suit.

"The candy is well known by its colorful array, which Mars has dubbed 'the rainbow' for marketing purposes to great success," the suit said.

"Research shows that the effects (from consuming titanium dioxide) are serious, including DNA and chromosomal damage, organ damage, inflammation, brain damage, genital malformations, lesions in the liver and kidneys, and cell necrosis," the suit filed in U.S. District Court in San Francisco claimed.

A spokesperson for Mars said the company does not comment on pending litigation.

France banned the white mineral compound from food starting in 2020, and the E.U. followed suit, with a phase-out leading to a full ban effective next month. In powdered form, titanium dioxide is used in food manufacturing to add whiteness or boost brightness, and was originally approved for food use by U.S. and E.U. regulators in the late 1960s, according to a May paper by a researcher at the University of Warwick in England.

In modern times, however, "scientific studies highlight the presence of nanoparticles in (titanium dioxide) in alarming concentrations, which poses a health hazard," according to the paper.

The European Food Safety Authority found that DNA damage from titanium dioxide in food "could not be ruled out," leading to the E.U. ban, which was phased in because the authority found no "immediate" health concerns from the additive.

The Titanium Dioxide Manufacturers Association — motto: "for a brighter future" — has assailed the authority's findings, arguing that the E.U.-funded group found "no conclusive evidence showing harmful effects," and that "no verifiable link has ever been proved between general intake of titanium dioxide and harm to human health."

Thames' suit alleges that although Mars must comply with the E.U. ban on using titanium dioxide, it continues using it in Skittles sold in the U.S. while "failing to inform consumers of the implications of consuming the toxin."

Mars in 2016 pledged to remove all artificial colors from its food products, and the non-profit Center for Food Safety eight months later said it had pressed the company on titanium dioxide, and was assured in an email that the compound would be among the ingredients no longer used.

Thames "remains interested in purchasing candies" from Mars, and many of the multi-national firm's competitors don't use titanium dioxide — also known by its chemical formulation TiO2 — in their sweets, according to the suit.

"Similarly, Sour Patch Kids does not make use of TiO2 and accomplishes vivid colors like lime green, yellow, orange, and redberry. Nerds also achieves bright colors including blue, green, red, and orange without the use of TiO2. Indeed, even (Mars) has colorful confectionary goods such as its M&Ms product line that do not rely on TiO2."

Thames' suit claims Mars "concealed and misrepresented" Skittles as safe for human consumption. He is seeking unspecified damages for himself and other consumers of the candy.