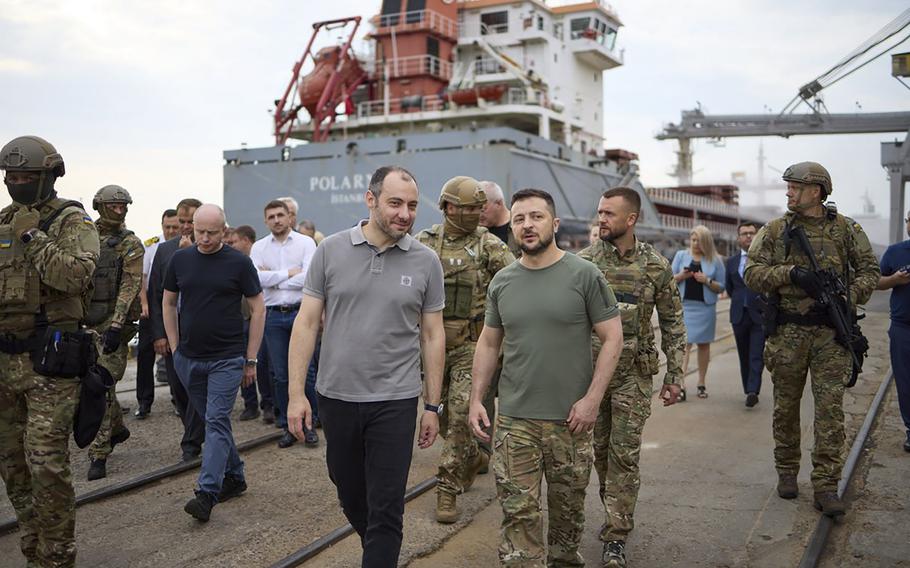 (Tribune News Service) — The first ship to export Ukrainian grain since an agreement was reached for the safe transit of vessels may depart as soon as Monday, President Recep Tayyip Erdogan’s spokesman Ibrahim Kalin said.

“There are a few hitches, a few issues being discussed with the Russians,” Kalin said in an interview with Kanal 7 TV channel on Sunday, adding that the ships should start departing “by Tuesday at the latest.”

More than a week after Russia and Ukraine reached a deal aimed at releasing millions of tons of grain through three Black Sea ports, no ships have sailed.

Ukraine said on Friday it’s close to restarting shipments, although the timing was linked to receiving go-ahead from the United Nations, which along with Turkey was a signatory to the July 22 agreement. The UN has declined to specify a day.

President Volodymyr Zelenskyy visited the Black Sea port of Chornomorsk on Friday, where he watched grain being loaded onto a Turkish vessel.

Ukraine is one of the world’s biggest wheat, corn and vegetable-oil suppliers, and crop markets are watching closely for concrete moves toward unlocking Ukraine’s ports.

While there’s has been incremental progress — Ukraine’s Sea Ports Authority earlier told companies a test boat would sail soon, and a group of insurers set up a program to cover cargoes of food from Ukraine — traders and exporters are still waiting for information about how and when vessels will depart, and to where.

Shipowners face a myriad of challenges, including recruiting crews to operate the ships as safety concerns remain. A Russian attack on Odesa’s sea port with cruise missiles hours after signing the deal also raised questions about its commitment.

Turkish defense minister Hulusi Akar met over the weekend with Ukraine’s defense and infrastructure chief to discuss the latest situation on the export restart, Turkey’s defense ministry said on Twitter.