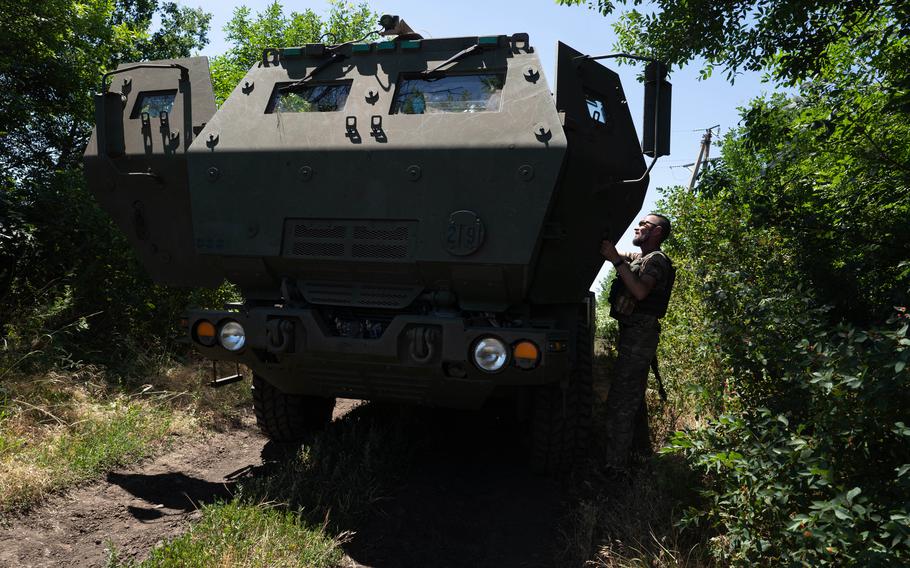 A Ukrainian serviceman opens the door to a HIMARS vehicle in eastern Ukraine on July 1. (Anastasia Vlasova/The Washington Post)

KYIV, Ukraine — Russian advances in Ukraine have slowed almost to a standstill as newly delivered Western weapons help Ukrainian forces reclaim much of the advantage they had lost in recent months, opening a window of opportunity to turn the tide of the war in their favor again.

Russian troops have made no significant territorial gains since the Ukrainian retreat on July 2 from the eastern city of Lysyschansk under withering artillery fire. The retreat gave Russia full control over Luhansk, one of the two oblasts, or regions, that make up the broader eastern Donbas area, and it marked Russia's only meaningful strategic success since its retreat from territory around Kyiv in April.

The lack of progress may be explained at least in part by the "operational pause" declared by Russia's Defense Ministry after the seizure of Lysyschansk — to allow Russian troops a chance to "rest and develop their combat capabilities," in the words of President Vladimir Putin.

But the so-called pause did not halt Russian attempts to probe and penetrate Ukrainian lines — and the official end of the pause, announced by Defense Minister Sergei Shoigu on July 15, has brought no noticeable increase in the intensity of Russia's assaults, said George Barros, a geospatial and Russia analyst with the Institute for the Study of War.

Rather, Barros and many Western officials and analysts suspect that the Russians are close to exhausting their capacity to make further territorial gains as their depleted army confronts Ukrainian forces with newly acquired capabilities. Already forced to abandon their hopes of capturing the capital, Russian forces may soon have to reckon with their inability to conquer the entirety of the Donbas region — the only publicly declared goal of the initial invasion and the focus of current offensive ambitions.

Russia may succeed in capturing one or two more of the Donbas towns in its immediate line of fire, such as Siversk and the nearby town of Bakhmut, said Barros, but it is hard to see its existing army pressing much farther than that.

"It does seem the Russians' ability for forward movement is petering out," said Phillips O'Brien, a professor of strategic studies at the University of St. Andrews in Scotland. "I don't see them being able to advance much more in the Donbas."

It is still too early to dismiss the Russian force, analysts say. A massive recruitment campaign is underway across Russia that may yet generate the manpower it desperately needs to compensate for its enormous losses. Russia adapted its goals and tactics after stumbling around Kyiv and may adapt them again, said a Western official who spoke on the condition of anonymity because he was not authorized to speak on the record. He noted that Russia also has capabilities it has not yet utilized that could take the war in a different and alarming direction, an ominous reference to Russia's chemical and nuclear stockpiles.

In the meantime, the Ukrainian army has the chance to seize back the initiative, taking advantage of the extra range and precision offered by the more advanced artillery provided by Western allies in recent weeks, notably the U.S. High Mobility Artillery Rocket Systems (HIMARS) that Ukraine had long sought.

"Right now, the Russians are losing the initiative, and the Ukrainians either have it or are about to have it," Barros said. "The HIMARS are key to that."

The HIMARS give the Ukrainians the ability to strike almost 50 miles behind Russian lines with a high degree of accuracy, and Ukrainians have used them to destroy more than 100 high-value Russian targets, including command and control centers, ammunition storage sites and logistics and support facilities, according to a senior U.S. defense official who spoke on the condition of anonymity because he was not authorized to divulge the information.

Most recently, Ukrainian forces have been utilizing the HIMARS to press a fledgling counteroffensive toward the strategically vital southern city of Kherson, which was occupied by Russia in the first days of the war.

The Ukrainian counteroffensive is "gathering momentum," Britain's Ministry of Defense said in a tweet on Thursday, after a third HIMARS attack Tuesday against the Antonovsky Bridge across the Dnieper River severely damaged a vital road link.

The bridge, almost a mile long, provides the main supply route between Russia's 49th Army stationed on the west bank of the river and the rest of the Russian force, and the attack leaves the troops there "highly vulnerable," the tweet added.

It remains unclear whether strikes had permanently rendered the bridge unusable, but videos posted on social media showed significant damage and signs indicating the bridge is at least temporarily closed.

"The Ukrainians have changed the character of the conflict with their ability to attack behind Russian lines," O'Brien said. "What we will see in the next few months is the initiative swing back to the Ukrainians, and then we will have to see if the Ukrainians can push the Russians back."

The biggest effect of the HIMARS so far has been to erode the Russians' overwhelming artillery advantage, both in terms of the number of guns and also the number of rounds they can fire, said Rob Lee of the Philadelphia-based Foreign Policy Research Institute.

After Russia pivoted to the eastern front and began slowly taking territory from the Ukrainians, the artillery edge "was probably a deciding factor," he said. "They were firing by an enormous magnitude more rounds a day than Ukraine was, and over time it becomes really hard. Soldiers can't withstand that."

By using the HIMARS to destroy ammunition stocks, Ukraine has forced the Russians to move ammunition depots farther away from the front, lengthening their supply lines and complicating the logistics of getting artillery shells to the units that need them. "Russia doesn't have a good automated logistical system; it requires a lot of manual labor, and that means it's not very efficient," Lee said.

By striking command and control centers, Ukraine is taking out the officers and commanders who would issue the orders to mitigate the impact of the HIMARS. "We know from the way that the Russians fight that they need someone to tell them what to do. And when you are able to kill the people that tell them what to do, you're able to stop those folks from moving forward," the U.S. official explained.

But while the HIMARS have blunted Russia's ability to advance, they won't help Ukraine make territorial gains, said Lee, a former infantry officer in the U.S. Marines. That will depend more on Ukraine's ability to field sufficient manpower, conventional artillery and ammunition to roll back Russian troops, and Russia still maintains an overall numerical edge, he said.

There are particular concerns about whether the West will be able to continue to supply the Ukrainians with the amount of ammunition they need for their artillery, including for the HIMARS, Lee added.

That concern was echoed last week by the chairman of the Joint Chiefs of Staff, Gen. Mark Milley, in a briefing with reporters. Although the Ukrainians have sought a bigger number of systems, "the issue will become ammunition and the consumption rates," he said. "We think we're OK right now."

But looking beyond the next three months will require careful study by the Pentagon to ensure that U.S. military readiness isn't compromised, as well as an effort to ramp up U.S. ammunition production, Milley said.

"One reason the Russians are not advancing is the HIMARS, but that doesn't mean Ukraine is able to retake territory, either. We could see a stalemate-ish situation with not much advancing on either side," Lee said.

"It comes down to sustainability, and it's not clear which side has the better angle there."