Amid summer heat wave, Germany worries over having enough gas for winter 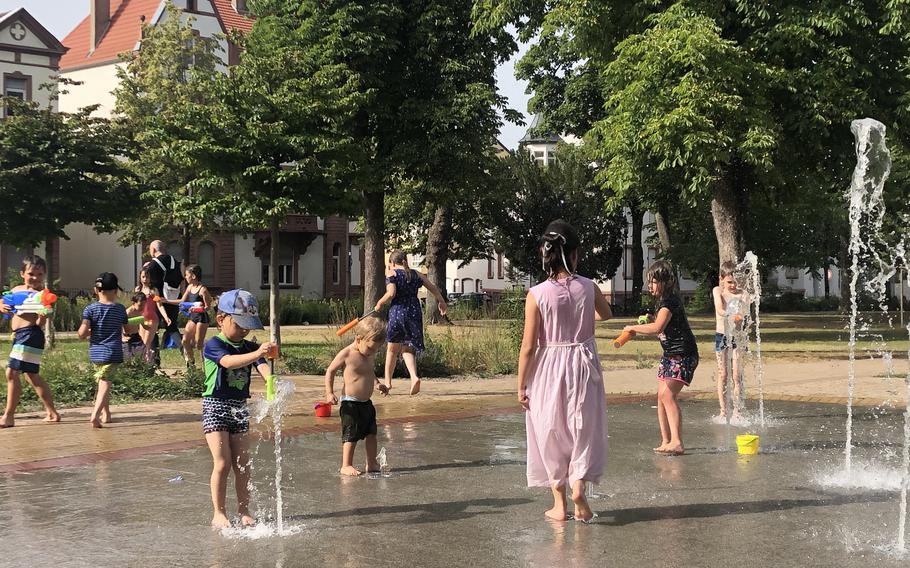 Children try to cool off at StadtPark in Kaiserslautern, Germany. To combat the energy crisis in Europe, the city passed a savings plan. (Heather Benit/Stars and Stripes)

BERLIN — There won’t be Christmas lights or an ice skating rink in Kaiserslautern this year, the city said. Nuremberg has stopped illuminating its historic buildings. Hamburg landlords are rationing hot water, and Berlin may turn off nonessential traffic lights at night. In Potsdam, even the temperatures on Germany’s beloved saunas have been turned down.

“It’s better to have a cold shower in summer than a cold apartment in winter,” said Jürgen Krogmann, the mayor of Oldenburg, a city in northwestern Germany, whose 30-point energy-saving plan includes shutting off hot water in municipal buildings, putting an end to warm showers in public sports facilities and nixing air-conditioning in public buildings even during this week’s heat wave.

“It is about not being blackmailed by [Russian President Vladimir] Putin and becoming energy self-sufficient,” Krogmann said. “It’s about protecting the climate. And it’s about reacting to the massively increased prices.”

Kaiserslautern city’s energy savings plan includes switching off night illumination of public and historical buildings for the rest of the year.

It is part of a desperate scramble across Europe to reduce energy consumption in a summer of soaring temperatures and prices and to build up natural gas supplies ahead of the bitter chill of winter — in anticipation that Russia may shut off the gas completely.

The European Commission is expected on Wednesday to outline a proposal — tentatively called “Save gas for a safe winter” — recommending that European Union countries prepare for the months ahead by continuing to look for alternatives to Russian natural gas, including finding new gas suppliers and switching to different types of fuel.

It also suggests measures to reduce demand by limiting thermostat settings in public buildings, among other measures, according to an early draft obtained by French media outlet Contexte and reviewed by The Washington Post.

The draft notes that Russia has already stopped sending gas to the Baltic states and Poland, Bulgaria and Finland and that flows to Denmark, the Netherlands and Italy have been reduced. The proposal suggests there is a “sizable risk” that Russia may halt imports this year.

That would have an impact across the EU and ripple effects around the world. But Germany’s heavy reliance on Russian gas makes it especially vulnerable to disruptions.

Despite a rush to diversify, Berlin remains at the mercy of the whims of Moscow, which supplies 30% of the natural gas used for Germany’s electricity production and home heating.

Anxiety is high this week that Moscow may decide not to reconnect Nord Stream 1, the main pipeline between Russia and Germany, at the end of 10 days of scheduled maintenance on Thursday. State-run Russian gas giant Gazprom has warned some European clients that it can no longer guarantee supply to the continent in the context of war. But on Tuesday, Putin told reporters that “Gazprom has fulfilled, is fulfilling and will fulfill its obligations in full.”

While waiting to see how it plays out, Germany is making contingency plans.

It is temporarily falling back on coal power plants and even considering keeping some nuclear power plants online - something the government had fiercely resisted.

An extreme move, which experts say may be triggered in case of a Nord Stream 1 stoppage, would be to cut off certain nonessential industries from gas supplies, causing significant ramifications for Europe’s largest economy.

“When Putin cuts gas supplies, he uses energy as a weapon,” German Chancellor Olaf Scholz wrote in an opinion piece in Frankfurter Allgemeine Zeitung on Monday. “Not even the Soviet Union did that during the Cold War,” he added.

The stability of Russian gas flows during the Cold War was an oft-repeated argument of Scholz’s predecessor, Angela Merkel, who oversaw an increase in German dependence on Russian energy, despite Russian belligerence beyond its borders.

But even before the war in Ukraine, Germany’s gas storage facilities, which hold the most volume in the E.U., were running low. Storage levels in February were less than a third - in part the result of what many experts say was an intentional move by the Kremlin as it prepared for war.

Storage was at “historical low levels” between the end of last year and February, said Philipp Heilmaier, head of the future energy supply division at the German Energy Agency, a partially state-funded consultancy.

The Rehden storage facility - one of Western Europe’s largest, with the capacity to hold more than 4 billion cubic meters of gas - was less than 1% full. The facility had been controlled by a Gazprom subsidiary.

Storage levels have since rebounded to 64.6% overall, and 32.4% at Rehden, which is now run by a government trust. But efforts to top up stagnated after Gazprom reduced supplies arriving through Nord Stream 1 to 40% of capacity in June. And there are concerns about being able to reach the government’s goal for overall storage levels of 80% by Oct. 1 and 90% by Nov. 1.

“At present, gas storage facilities are being partially depleted,” the Federal Network Agency, Germany’s electricity and gas regulator, said in a report last week. “This development makes it difficult to achieve the storage levels required for the winter and reduces the reserves for a gas shortage situation.”

That’s despite a drop in consumption. In the first five months of the year, Germans used 14% less gas compared with a year earlier, according to Germany’s Association of Energy and Water Industries. The association attributed that in part to a milder winter, but also to consumer behavior in response to a combination of higher prices and the plea to save energy.

Markus Bauer-Schneider, 48, who lives in Berlin with his partner and infant, said he’s paying more attention to his energy use —not just because of the rising costs, but also because of concerns about supplies.

“We live in an old building, and I am very sure already that we will use only half our living space in winter,” he said. “It’s quite a few square meters, so we won’t heat the living room in winter. It’s just not worth it anymore.”

The capital is still putting together its energy-saving plans, with discussions about whether to turn the lights off at the Brandenburg Gate monument and 200 public buildings after midnight, dim streetlights and turn off traffic lights at night. But Berlin is also living up to its reputation for inefficiency. The Tagesspiegel newspaper reported that the city is running 1,400 gas-powered streetlights day and night because the timer mechanism is broken.

Bauer-Schneider said he’s willing to make sacrifices. “We should not be getting gas from such a madman,” he said, referring to Putin. “So then you have to cut back.”

Others aren’t yet willing to let go of small luxuries.

“For me, a bathtub is absolute quality of life,” said Michael von Wittke, 44, who attested that he already had a very small carbon footprint. “I can lie in it for one or two hours and then would even add more hot water twice. To me, that is one the cores of my quality of life. I will only change that under very particular circumstances.”

Still, Jens Suedekum, an economics professor at the Heinrich Heine University Düsseldorf and adviser to Germany’s government on climate and energy, said that to make it through the winter without a drastic government intervention in the energy market, consumers need to reduce supply in the short term.

Given current storage levels, demand for gas from private households needs to drop by 10% at minimum, he said, though with a 15% to 20% reduction, the “possibility for disaster would be much lower.”

“Information campaigns and ‘please’ are not enough,” he said. “Certain people you might reach, but the vast majority need price signals to decrease demands.”

Germany has so far shielded consumers from the full extent of the price hikes — which otherwise would have tripled or quadrupled energy bills. Currently employed Germans are entitled to a one-off payment of 300 euros in September as compensation for their increased energy costs.

But experts say that additional price increases passed on to consumers would need to come with significantly more financial protection for vulnerable households.

Already, to the dismay of social organizations, some towns and cities are planning mass “warming centers” during the winter for the vulnerable in public buildings such as recreation centers.

In the city of Ludwigsburg, just north of Stuttgart, the district fire chief said 5,000 sleeping bags and beds were being readied. “We want to be prepared,” he told the FAZ newspaper.

If the gas is turned back on Thursday, it will be a “huge relief,” said Suedekum, the economics professor, “at least for a little bit of time.”

But even then, the uncertainty is likely to return.

“The long-term answer is renewables,” he said. “That’s the ultimate answer to all these energy problems.”

The Washington Post’s Emily Rauhala and Quentin Ariès in Brussels contributed to this report.

Stars and Stripes reporters contributed to this story from Kaiserslautern, Germany.