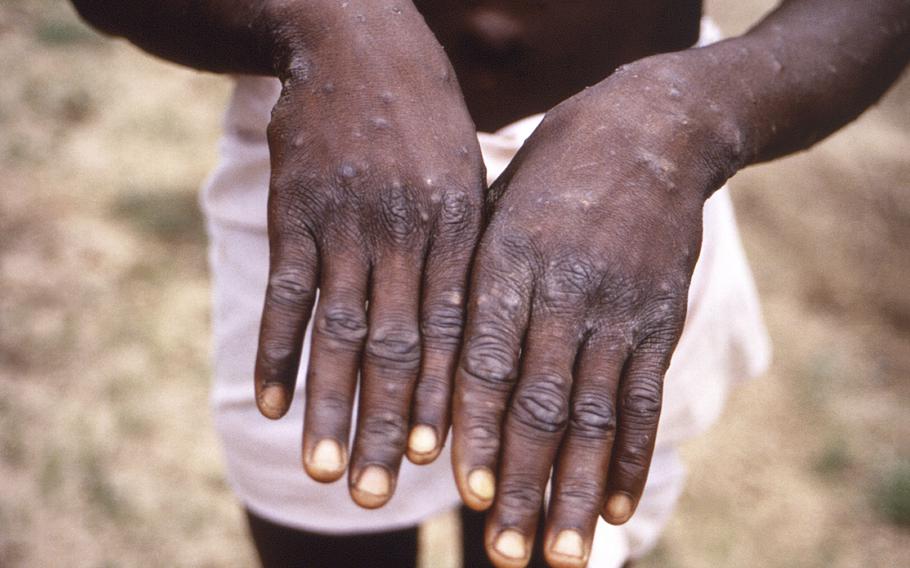 This 1997 image provided by the CDC during an investigation into an outbreak of monkeypox, which took place in the Democratic Republic of the Congo (DRC), formerly Zaire, and depicts the dorsal surfaces of the hands of a monkeypox case patient, who was displaying the appearance of the characteristic rash during its recuperative stage. (CDC via AP)

The World Health Organization has decided not to declare monkeypox a global emergency despite a rapid rise in cases in Europe, electing instead to describe it as an “evolving health threat.”

The announcement Saturday comes after the WHO’s International Health Regulations Emergency Committee met last week to discuss whether the monkeypox outbreak should be labeled a Public Health Emergency of International Concern, or PHEIC, which would have marshaled new funding and spurred governments into action.

WHO Director General Tedros Adhanom Ghebreyesus said the committee shared “serious concerns about the scale and speed of the current outbreak,” which, he said, now spans more than 50 countries, with some 3,000 cases since early May.

The committee agreed the outbreak requires “coordinated action” to stop the further spread of the monkeypox virus using public health measures, including surveillance, contact-tracing, isolation and care of patients.

But there were differing views among committee members about whether the event yet constituted a health emergency of international concern — which is the highest level of alert WHO can issue. The coronavirus which causes COVID-19 was labeled a PHEIC following a similar meeting in January 2020.

“Everybody’s tired of the COVID pandemic and nobody wants to hear about another sort of infectious disease outbreak. But the point is, is that we’re sort of on the cusp of containment among men who have sex with men or whatnot. And to get us to where we need to go, we need global coordination and a global commitment,” said Gregg Gonsalves, an infectious diseases expert at Yale School of Public Health, who is a non-voting member of the WHO committee and believes moneypox should be declared a global

The committee noted monkeypox has been circulating in a number of African countries for decades and has been neglected in terms of research, attention and funding — a point that has previously led some experts to suggest a double standard in the response to the outbreak in Europe.

“This must change not just for monkeypox but for other neglected diseases in low-income countries as the world is reminded yet again that health is an interconnected proposition,” Tedros said in a statement Saturday.

“What makes the current outbreak especially concerning is the rapid, continuing spread into new countries and regions and the risk of further, sustained transmission into vulnerable populations including people that are immunocompromised, pregnant women and children,” he added.

Tedros said Thursday that nearly 1,500 suspected cases of monkeypox, and some 70 deaths, have been reported in central Africa this year.

Monkeypox is spread through close contact and has so far primarily affected men who have sex with men. It begins with flu-like symptoms before fluid-filled lumps or lesions appear on the skin, which can leave behind permanent scarring. Health officials say that the latest outbreak has frequently brought genital rashes, and while most cases are mild and patients recover in three weeks, the virus can be fatal and is more of a risk to pregnant people or those with weakened immune systems.

In a separate statement Saturday, the WHO committee noted that “many aspects of the current multi-country outbreak are unusual,” including cases being recorded in countries where the virus had not been previously documented, “and the fact that the vast majority of cases is observed among men who have sex with men, of young age, not previously immunized against smallpox.”

The first case of monkeypox in the United States was detected May 17. Over the past five weeks, more than 100 cases have been added, according to data from the Centers for Disease Control and Prevention. California, New York and Illinois are listed as the states with the highest level of infection.

Some experts in the United States are calling on the White House to implement thorough testing to avoid the failures of the pandemic.

Britain has the highest reported number of infections outside Central and West Africa, with almost 800 cases of the virus recorded in the past month.

The Washington Post’s Jennifer Hassan in London contributed to this report.