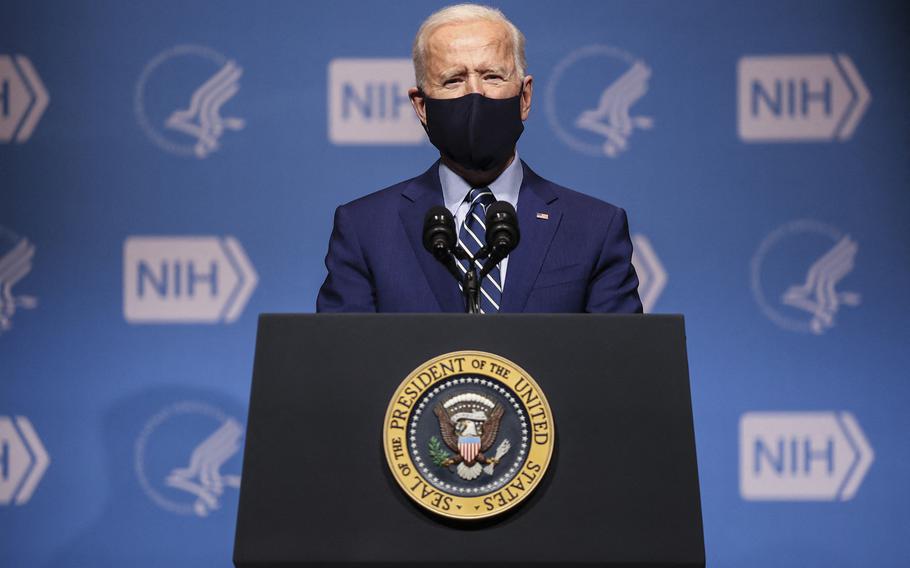 President Joe Biden talks to staff at the National Institutes of Health on Thursday, February 11, 2021 in Bethesda, Maryland. Biden is on his way to the G-7 Summit starting Sunday, June 26, 2022, where negotiators are already mulling over a cap on Russian oil prices. (Oliver Contreras/TNS)

Group of Seven negotiators agreed that discussions on a potential price cap on Russian oil had progressed enough to send the issue to leaders to discuss at a summit starting Sunday in Germany, according to people familiar with the matter.

The negotiators known as sherpas held what one official described as “intense” talks on the matter in the Bavarian Alps ahead of the summit.

While there are many issues still to be ironed out, they reached an understanding that leaders should have a formal discussion about a price cap, the person said, asking not to be identified discussing private matters.

Such a price mechanism would set an upper limit on imports of oil from Russia, which would be imposed unilaterally by each participating country and prevent Russia selling at a higher price. For European nations, it’s also a way to potentially defray inflation driven by energy prices as they grapple with the economic fallout of Russia’s invasion of Ukraine.

While Italy is among those championing the move — the U.S. is also pushing for it — some European nations have been wary given it could potentially require the painful reopening of already-agreed European Union texts on sanctions against Russia. That would need the agreement of all 27 EU member states and be very difficult to do.

It’s also unclear how key buyers of Russian crude such as China and India could be coaxed into complying with a price cap.

One idea being floated by the U.S. would be to allow them to keep accessing shipping insurance on oil cargo as long as they agree not to pay more than a certain price for the oil on board. The EU has agreed to ban insurance for the transportation of crude and petroleum products from Russia.

A German government official said the questions that needed solving were not trivial but the group was at least on a path to finding an agreement. The U.S. was confident a resolution would be found, a Biden official said.

Asked about the proposal on Air Force One as President Joe Biden flew to Europe, National Security Council spokesman John Kirby said leaders were looking for ways to minimize the hit from rising oil prices.

But with key details still being worked on, another G-7 official said it remained unclear whether the leaders would be in a position to back the concept.

G-7 states are eager to find a way to limit the Kremlin’s energy revenue while mitigating the effect on their own economies from steps to quickly curb their reliance on oil and gas from Russia.