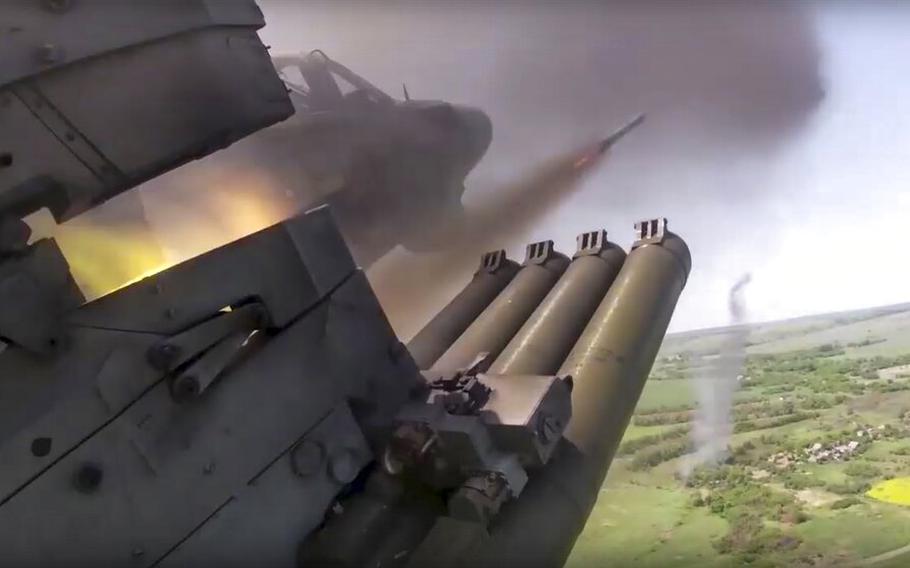 A Russian KA-52 helicopter gunship fires rockets on a mission at an undisclosed location in Ukraine, as seen in an image released on June 18, 2022. (Russian Defense Ministry)

The Russian military will soon exhaust its combat capabilities and be forced to bring its offensive in Ukraine's eastern Donbas region to a grinding halt, according to Western intelligence predictions and military experts.

"There will come a time when the tiny advances Russia is making become unsustainable in light of the costs and they will need a significant pause to regenerate capability," said a senior Western official, speaking on condition of anonymity to discuss a sensitive issue.

The assessments come despite continued Russian advances against outgunned Ukrainian forces, including the capture on Friday of the town of Severodonetsk, the biggest urban center taken by Russia in the east since launching the latest Donbas offensive nearly three months ago.

The Russians are now closing in on the adjacent city of Lysychank, on the opposite bank of the Donetsk river. The town's capture would give Russia almost complete control of the Luhansk oblast, one of two oblasts, or provinces, comprising the Donbas region. Control of Donbas is the publicly declared goal of Russia's "special military operation," although the multi-front invasion launched in February made it clear that Moscow's original ambitions were far broader.

Capturing Lysychank presents a challenge because it stands on higher ground and the Donetsk river impedes Russian advances from the east. So instead, Russian troops appear intent on encircling the city from the west, pressing southeast from Izyum and northeast from Popasna on the western bank of the river.

According to chatter on Russian Telegram channels and Ukraine's deputy defense minister Anna Malyar, the Russian military is under pressure to bring all of Luhansk under Russian control by Sunday, perhaps explaining the heightened momentum of the past week. 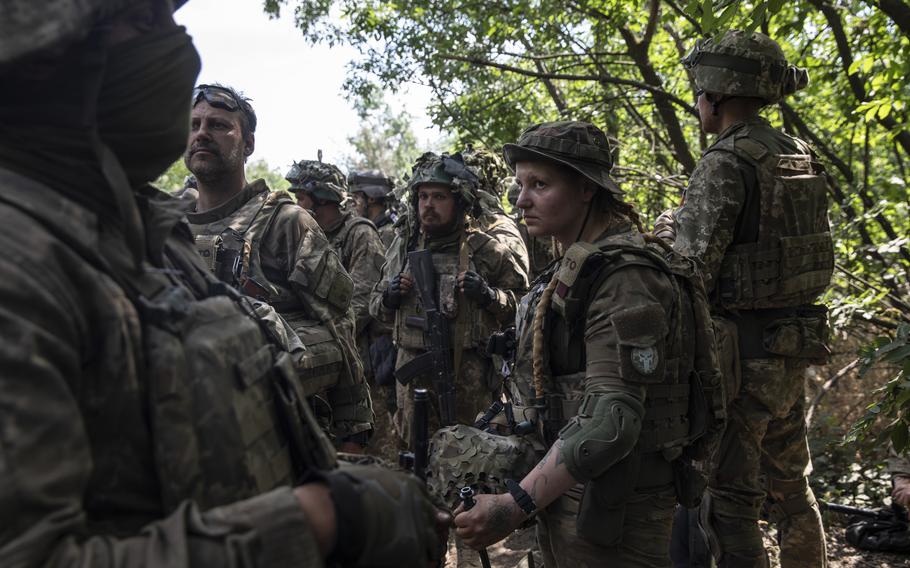 Elenna, 24, a female member of Ukraine’s Territorial Defense forces together with the other troops as they stopped on a road that leads to Lysychansk, Ukraine on June 21, 2022. (Heidi Levine/For The Washington Post)

But the "creeping" advances are dependent almost entirely on the expenditure of vast quantities of ammunition, notably artillery shells, which are being fired at a rate almost no military in the world would be able to sustain for long, said the senior Western official.

Russia meanwhile is continuing to suffer heavy losses of equipment and men, calling into question how much longer it can remain on the attack, the official said.

Officials refuse to offer a time frame, but British Prime Minister Boris Johnson, citing intelligence assessments, indicated this week that Russia would be able to continue to fight on only for the "next few months." After that, "Russia could come to a point when there is no longer any forward momentum because it has exhausted its resources," he told the German newspaper Sueddeutsche Zeitung in an interview.

Russian commentators are also noting the challenges, emphasizing a chronic shortage of manpower. "Russia does not have enough physical strength in the zone of the special military operation in Ukraine . . .. taking into account the almost one thousand kilometer (or more) line of confrontation," wrote Russian military blogger Yuri Kotyenok on his Telegram account. He estimated that Russia would need 500,000 troops to attain its goals, which would only be possible with a large-scale mobilization of military men, a potentially risky and unpopular move that President Vladimir Putin has so far refrained from undertaking.

The Russian onslaught has already outlasted forecasts that Russia's offensive capabilities would peak by the summer. Aggressive recruitment of contract soldiers and reservists has helped generate as many as 40,000 to 50,000 troops to replenish those lost or incapacitated in the first weeks of the fighting, according to Ukrainian officials. Russia has been hauling ancient tanks out of storage and away from bases across the vast country to throw onto the front lines in Ukraine.

The Russians still have the advantage over Ukrainian forces, who are suffering too. Ukrainian officials put the number of their soldiers killed in action at as many as 200 a day. The Ukrainians have also almost entirely run out of the Soviet-era ammunition on which their own weapons systems rely, and are still in the process of transitioning to Western systems.

But conditions for Ukrainian troops are only likely to improve as more sophisticated Western weapons arrive, while those of Russian forces can be expected to deteriorate as they dig deeper into their stocks of old, outdated equipment, said retired Gen. Ben Hodges, a former commander of U.S. forces in Europe who is now with the Center for European Policy Analysis. At some point in the coming months, the Ukrainians will have received enough Western weaponry that it is likely they will be able to go on the counteroffensive and reverse the tide of the war, he said.

"I remain very optimistic that Ukraine is going to win, and that by the end of this year Russia will be driven back to the Feb. 24 line," he said, referring to the boundaries of Russian-occupied areas in Crimea and Donbas captured during fighting in 2014 and 2015. "Right now it sucks to be on the receiving end of all this Russian artillery. But my assessment is that things are going to be trending in favor of the Ukrainians in the next few weeks."

Already there are indications that the supply of Western weapons is gathering pace. Newly arrived French CAESAR howitzers were videoed in action on the battlefield last week, followed this week by German Panzerhaubitze 2000 howitzers, the first of the heavy weapons promised by Germany to be delivered.

The first of the much anticipated U.S. HIMARS systems, which will give the Ukrainians the ability to strike up to 50 miles behind Russian lines, have also been delivered to Ukraine in recent days, according to U.S. officials, though these weapons have not yet been reported in use on the front lines.

It is difficult to predict the future because so much isn't known about the conditions and strength of Ukrainian forces, said Mattia Nelles, a German political analyst who studies Ukraine. The Ukrainians have maintained a high level of operational secrecy, making it hard to know, for example, how many troops they still have in the Lysychansk area or the true rate of casualties, he said. 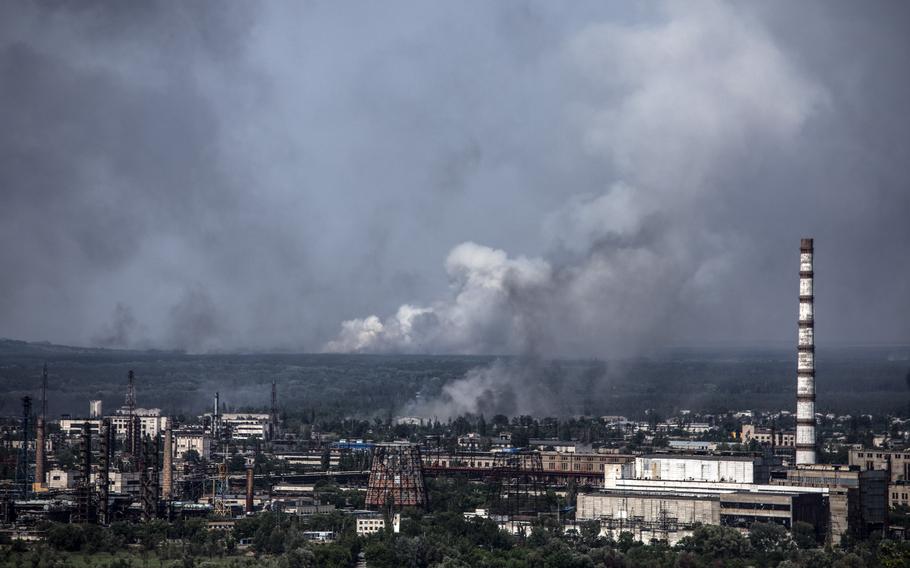 Smoke rises above the nearby city of Severodonetsk during a battle between Russian and Ukrainian troops in the eastern Ukraine region of Donbas on June 20, 2022. (Heidi Levine/For The Washington Post)

Another unknown is the extent of Russian artillery stocks, which Western intelligence estimates had initially underestimated, the Western official said. Expecting a short war in which Ukrainian forces quickly folded, the Russians made no effort to ramp up production before the invasion and although they have presumably now done so, their defense industrial complex does not have the capacity to keep up with the "enormous" rate at which Russia is expending artillery shells, the Western official said. "Their supply is not infinite," he said.

And although Ukrainian forces are having a tough time right now, they do not appear in danger of collapse, said expert Michael Kofman, director of Russian Studies at the Center for Naval Analysis, speaking to the Silverado Policy Accelerator podcast, Geopolitics Decanted.

The Ukrainians are continuing to harass Russian forces north of the city of Kharkiv and have made limited gains in a small offensive outside the city of Kherson in southern Ukraine, helping divert Russian resources away from the Donbas front.

The minor territorial gains currently being notched up by Russia are less significant than the overall balance of power on the battlefield, Kofman said.

"The most significant part of the war isn't these geographic points, because now it's a contest of will but also a material contest, of who is going to run out of equipment and ammunition and their best units first," he said. "Both of these forces likely to get exhausted over the summer and then there will be an operational pause."

At that point, assuming sufficient quantities of weaponry and ammunition have arrived, the hope is that Ukraine will be able to go on the counteroffensive and start rolling Russian troops back, Ukrainian officials have said.

If not, both sides will dig in to defend their positions, and a stalemate will ensue, barring the unlikely prospect of a diplomatic breakthrough, the Western official said.

"You'll have two sides not seeking territorial advantage but on operational pause, focused on resupplying and relieving the front line, at which point you are into a protracted conflict," he said.