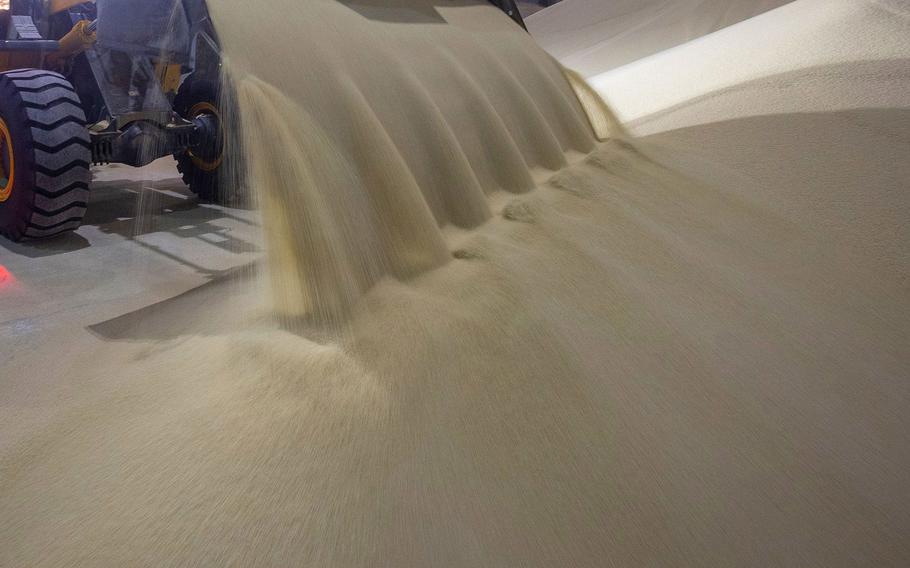 A worker operates a front-end loader to move granules of phosphate fertilizer in a storage warehouse at a fertilizer plant, in Cherepovets, Russia. (Bloomberg)

The U.S. government is quietly encouraging agricultural and shipping companies to buy and carry more Russian fertilizer, according to people familiar with the efforts, as sanctions fears have led to a sharp drop in supplies, fueling spiraling global food costs.

The effort is part of complex and difficult negotiations underway involving the United Nations to boost deliveries of fertilizer, grain and other farm products from Russia and Ukraine that have been disrupted by President Vladimir Putin’s invasion of his southern neighbor.

U.S. and European officials have accused the Kremlin of using food as a weapon, preventing Ukraine from exporting. Russia denies that even as it has attacked key ports, blaming the shipment disruptions on sanctions imposed by the U.S. and its allies over the invasion.

The EU and the U.S. have built exemptions into their restrictions on doing business with Russia to allow trade in fertilizer, of which Moscow is a key global supplier. But many shippers, banks and insurers have been staying away from the trade out of fear they could inadvertently fall afoul of the rules. Russian fertilizer exports are down 24% this year. U.S. officials, surprised by the extent of the caution, are in the seemingly paradoxical position of looking for ways to boost them.

The U.S. push underlines the challenge facing Washington and its allies as they seek to increase pressure on Putin over his invasion but also limit the collateral damage to a global economy heavily dependent on commodity supplies from Russia ranging from natural gas and oil to fertilizer and grains. Prices for all of those have spiked further since the war started in February, a point Putin regularly makes in his public efforts to undermine support for sanctions.

Washington sent a representative to UN-led talks in Moscow earlier this month on the supply issues, according to people familiar with the situation who spoke on the condition of anonymity to discuss matters that aren’t public. Inadequate fertilizer deliveries this year could also affect next year’s crops.

The White House didn’t immediately respond to a request for comment.

The Kremlin has called on the U.S. to provide assurances to buyers and shippers of its fertilizer and grain that they aren’t subject to sanctions, suggesting it’s a condition of any steps to unblock shipments of Ukrainian farm products now.

“For Russia, it’s really important that U.S. authorities send a clear signal that these deals are permitted and in the interest of global food security and they shouldn’t refuse to carry them out,” said Ivan Timofeev, a sanctions specialist at the Kremlin-founded Russian International Affairs Council.

While Russia claims that sanctions fears are also holding back its grain exports, total shipments this season are down only 14%, and wheat exports doubled in May, according to the country’s Grain Union.

By contrast, more than 25 million tons of grain, sunflower oil and other commodities are stuck in Ukraine because of security fears in the Black Sea ports and shipping lanes traditionally used to carry them to global markets. Officials warn the situation will become more dire with the new harvest beginning.

Talks on releasing those shipments have gone slowly, with Putin seeking to pin the blame on Ukraine for not wanting to remove mines from ports placed to defend them from possible attacks by Russian forces. Kyiv has said it’s not convinced by Moscow’s assurances that it won’t strike, noting that Russia also insisted before the war that it wouldn’t invade.

Russia won the support of Turkey in its calls for sanctions relief last week, but Turkey’s efforts to mediate a solution to restart shipments so far haven’t yielded results.

Shipping companies remain extremely wary of the Black Sea given sanctions and security fears, and industry officials say a more concerted international push will be needed to reassure them. Efforts to ship Ukrainian produce by rail to Europe have yield limited results amid differing track gauges and other logistical issues.

“We’re working together with our partners to get about half of what Ukraine exports out each month,” but that will take some time, James O’Brien, head of the Office of Sanctions Coordination at the State Department, told an online briefing June 9. “So we’re looking at a substantial shortfall.”