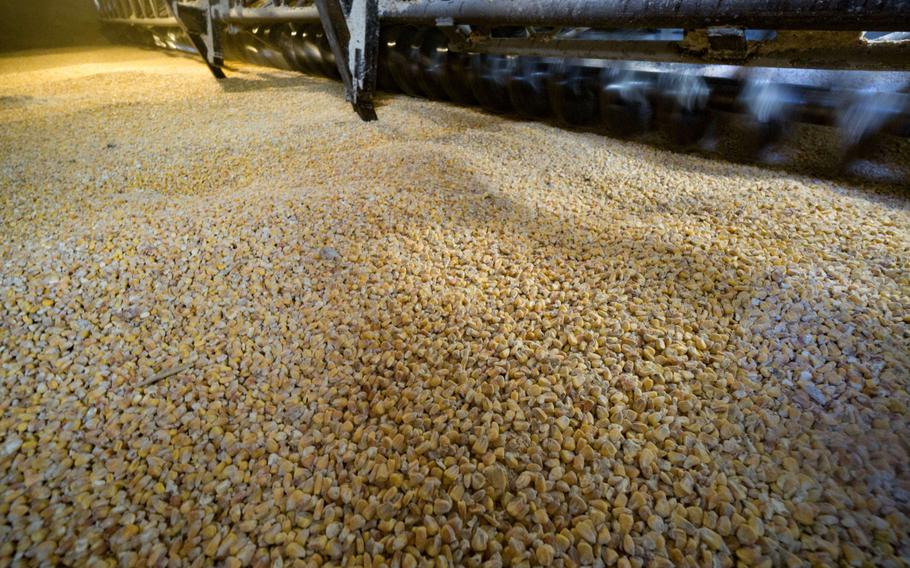 Corn grain sits inside a storage silo before being moved on a conveyor belt for loading onto a bulk carrier vessel at the Illichivsk Grain Terminal, operated by Glencore, at Illichivsk port in Odesa, Ukraine, on May 19, 2017. (Vincent Mundy/Bloomberg)

Turkey and Russia have reached a tentative deal to restart shipments of Ukraine's agricultural products from a key Black Sea port, but Kyiv remains skeptical of the proposed pact, according to people familiar with the discussions.

Turkish President Recep Tayyip Erdogan's government has offered military help to clear mines off the coast of Odesa and escort grain ships, but Ukraine has yet to endorse the plan, worried that removing defenses could leave the vital port open to Russian attack, the people said, speaking on condition of anonymity to discuss matters that aren't yet public. Turkey hopes that a U.N. endorsement of the proposal could allay security concerns, the people said.

Ukrainian President Volodymyr Zelensky said Kyiv wasn't invited to talks on the deal set for Ankara this week. Russian Foreign Minister Sergei Lavrov, who is scheduled to visit the Turkish capital Wednesday for discussions, said Monday he's optimistic that military officials can work out a solution.

The Kremlin's invasion has cut off shipments of grain and other farm products from Ukraine, threatening millions of people in its traditional markets with food shortages. Moscow has denied responsibility for the disruption but demanded relief from U.S. and European sanctions limiting its exports of fertilizer and agricultural products.

Ukraine and its allies blame Russia for blocking shipments. Zelensky said as much as 25 million tons of grain are now stuck without export routes, a figure that could triple by the autumn. He said Kyiv is seeking assurances that its ports will be protected from Russian attack once mines are removed. "The most firm guarantees will be weapons" that would allow Ukraine to hit Russian ships if they attack Ukrainian ports, he said.

The Russian-Turkish plan would allow for removal of mines near Odesa and guarantee safe passage for ships out of the Black Sea, under the auspices of the United Nations, the people said. Turkey, which has sought for months to mediate in the conflict, aims to set up a center in Istanbul to monitor and coordinate the shipments. Ukraine hasn't participated directly in the talks, according to an official there.

"By commenting in advance on reaching the deal, Russia is seeking to shift responsibility to Ukraine" for disrupting supplies, Taras Kachka, Ukraine's deputy economy minister, said in a text message. "But the fact remains that the food crisis has been artificially created by Russia and Russia alone."

Russia is also demanding the ability to inspect ships going to Ukraine for weapons, a condition Kyiv has resisted.