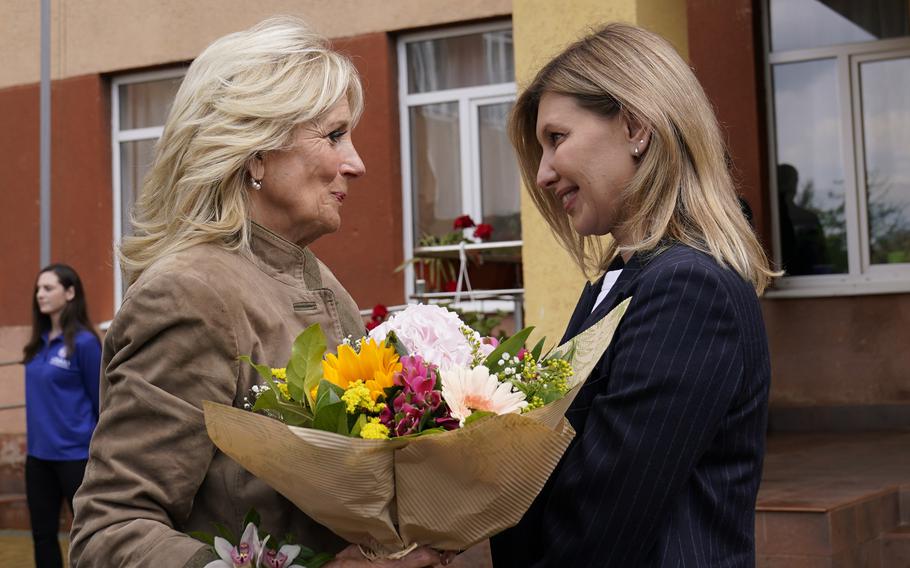 In a rare joint television interview, Ukrainian President Volodymyr Zelenskyy and first lady Olena Zelenska said Russia’s invasion of Ukraine has “torn apart” their family as it has for millions of other households across the country.

Zelenska, who has two children with Ukraine’s wartime president, admitted that she had barely seen Zelenskyy since Russian President Vladimir Putin ordered troops into Ukraine. She said she and her husband have been mainly communicating by phone since then.

“Our family was torn apart, as every other Ukrainian family,” Zelenska said. “He lives at his job. We didn’t see him at all for 2½ months.”

Yet Zelenska was quick to dismiss the idea raised by one of the interviewers from the Ukrainian television network ICTV that the war had “basically taken her husband away.”

“Nobody takes my husband away from me, not even the war,” Zelenska replied.

The interview marked the second time the couple, who married in 2003, have appeared together since Russia’s invasion on Feb. 24. During the sitdown, Zelenska said she was “grateful” for their joint television appearance because it meant they could finally spend time together.

“A date on TV, thank you,” she joked. Zelenskyy nodded alongside her.

In the early days of the war, Zelenskyy said he was Russia’s “target No. 1” and that his family was “target No. 2.”

“They want to destroy Ukraine politically by destroying the head of state,” he told Ukrainians in a February address, although he refused to flee. Instead, Zelenskyy took to the streets of the capital, posting defiant videos on social media that earned him global praise, while his wife and children hunkered down in an undisclosed location for their safety.

During their interview, Zelenska said she remembers waking up to “weird noises” as Russia began its invasion and noticing that her husband was not by her side. Zelenskyy was already awake and in the next room, putting on a suit.

“It has started,” she remembers him telling her before he left — words she said left her in a state of “anxiety and stupor.”

The war has raised the profile of Ukraine’s president, who has delivered video addresses to Ukrainians most nights and has spoken to parliaments around the world. He has appeared virtually at events from the Grammys to the Cannes Film Festival that opened last week.

Before becoming president three years ago, Zelenskyy was a comedian and actor who played the role of a president on screen. The 44-year-old also voiced Paddington Bear and, in 2006, won Ukraine’s version of “Dancing with the Stars.”

Zelenska, 44, is a screenwriter and has rarely been seen in public since Russia’s invasion. She was spotted for the first time earlier in May as Ukraine celebrated Mother’s Day, meeting in western Ukraine with U.S. first lady Jill Biden, who had crossed the border from Slovakia.

“We understand what it takes for the U.S. first lady to come here during a war when the military actions are taking place every day, where the air sirens are happening every day, even today,” Zelenska said at the time.

Zelenskyy and his wife made their television appearance as Russia scrambled to rebound in Ukraine after suffering huge losses. Prospects for victory are dwindling for Vladimir Putin’s troops — despite early predictions that Moscow would sweep to victory largely unchallenged, The Washington Post reported.

“We broke the back of the largest or one of the strongest armies in the world,” Zelenskyy told the interviewers.

During the couple’s hour-long interview, Zelenska expressed hope that once the war is over she could return to focusing on issues that affect Ukrainian women, such as unequal pay.

“After the victory, we will remember the heroism of our Ukrainian women,” she said.