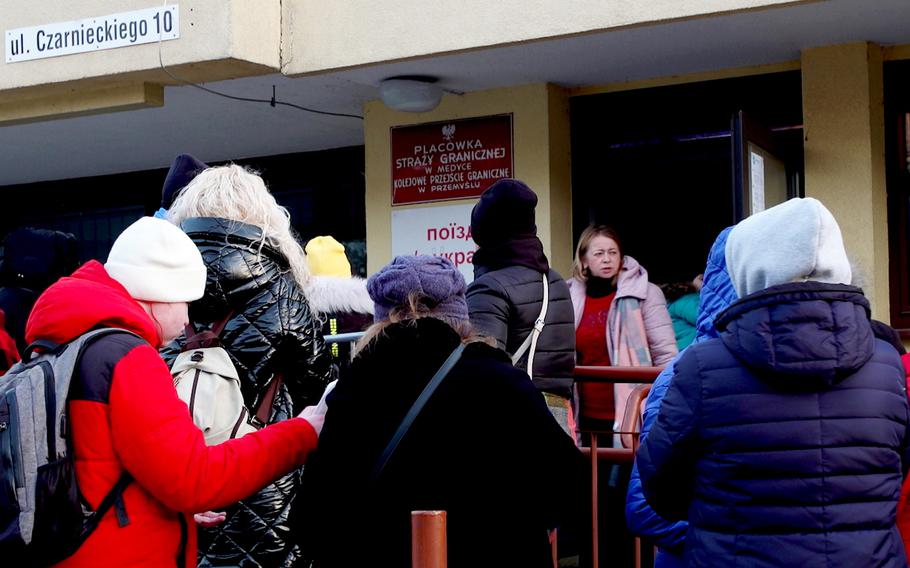 At the train station in Przemysl, just inside Poland near the Ukraine-Poland border, passengers wait to board a train to Kyiv on March 12. (Zoeann Murphy/The Washington Post)

As the steady flow of Ukrainians fleeing war-torn areas for neighboring countries in Europe continues, an increasing number are making the journey home, officials say.

In the past 24 hours, nearly 46,000 people crossed into Ukraine over its western border, including more than 42,000 Ukrainian nationals, the State Border Guard Service of Ukraine said in a Facebook post. That is more than the 37,000 who departed during the same period for Poland, Slovakia, Hungary, Romania and Moldova.

More than 6 million people have fled Ukraine since Russia invaded on Feb. 24, according to the U.N. refugee agency. Poland has taken in the majority, with more than 3 million entering the country, according to a count released by the Polish border guard.

Life in parts of Ukraine is returning to some semblance of normalcy after Moscow withdrew from areas surrounding the capital, Kyiv, and refocused its assault on the country's east. Kyiv's mayor, Vitali Klitschko, announced over the weekend that a wartime curfew in the city would start an hour later as of Sunday, running from 11 p.m. to 5 a.m.

While most of the fighting is now contained in Ukraine's south and east, Russian forces continue to mount sporadic attacks away from the front. On Sunday, a Russian airstrike hit a military facility in the western city of Lviv, regional governor Maksym Kozytskyy said in a message on Telegram. No deaths or injuries were immediately reported from the attack, he said.

Meanwhile, Russian forces have made modest gains west of Donetsk in recent heavy fighting, in a potential gambit to link up with stalled troops in the Donbas region, the Pentagon said Monday.

Fighting remains fluid in many areas in the east as Ukrainian and Russian forces capture and recapture territory. But Russia has been stymied in other areas, a senior U.S. defense official told reporters, speaking on the condition of anonymity under ground rules set by the Pentagon.

One potential Russian breakout outside Donetsk may be designed to reach troops farther west that have failed to make appreciable gains, the official said.

Russian forces have also recently bombarded western Ukraine, including with long-range missile strikes that appeared to target the Yavoriv military training center near the Polish border, the official said. That strike damaged a few buildings, but the official was not aware of any casualties.

The base was attacked in March, killing at least 35 people.